Three men are being hunted by police after a £33,000 Rolex watch was stolen during a robbery in Brighton. 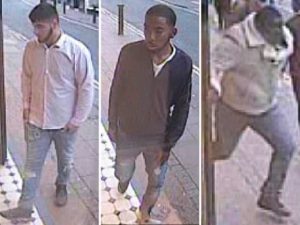 Sussex Police said today (Monday 11 March): “Police have released images of three men they want to identify in connection with an assault on a security guard and the robbery of a Rolex watch in Brighton.

“Two suspects went into the Watches of Switzerland shop, in Ship Street, Brighton, at about 4pm on Friday (8 March) and asked to view a Rolex watch worth £33,200.

“They were taken into the viewing area of the shop which is guarded by a security guard.

“In the meantime another man went into the store and suddently pushed the guard into one of the display cabinets causing him to fall to the floor and injure his head.

“One of the men has then grabbed the watch and all three had ran out of the shop, one running northwards and the other two going southward.

“The injured man tried to chase them but lost sight of the suspects.

“He was taken to hospital where he underwent treatment for a large cut to head.

“The first man who went into the shop to view the watch was described as being aged in his late twenties to early thirties, of Arabic appearance, with short black hair, chubby build and was wearing a white shirt and a denim jacket.

“The second man was black, 5ft 10in, aged in his late twenties, slim, with a skinny face, short black hair with short braids. He was wearing a dark-coloured short-sleeved shirt.

“The third man, who assaulted the security guard, is black, 5ft 6in, in his late twenties to early thirties, of large build, with a chubby face and short black hair.”

Detective Sergeant Dave Rose said: “We would like anyone who recognises these men or any witnesses who saw them running out of the shop to get in touch with us.

“The staff including the injured security guard are shaken up by their ordeal.

“If you have any information which could help the investigation, phone 101 or report online quoting serial 812 of 08/03.”