Four under the radar punk bands to investigate 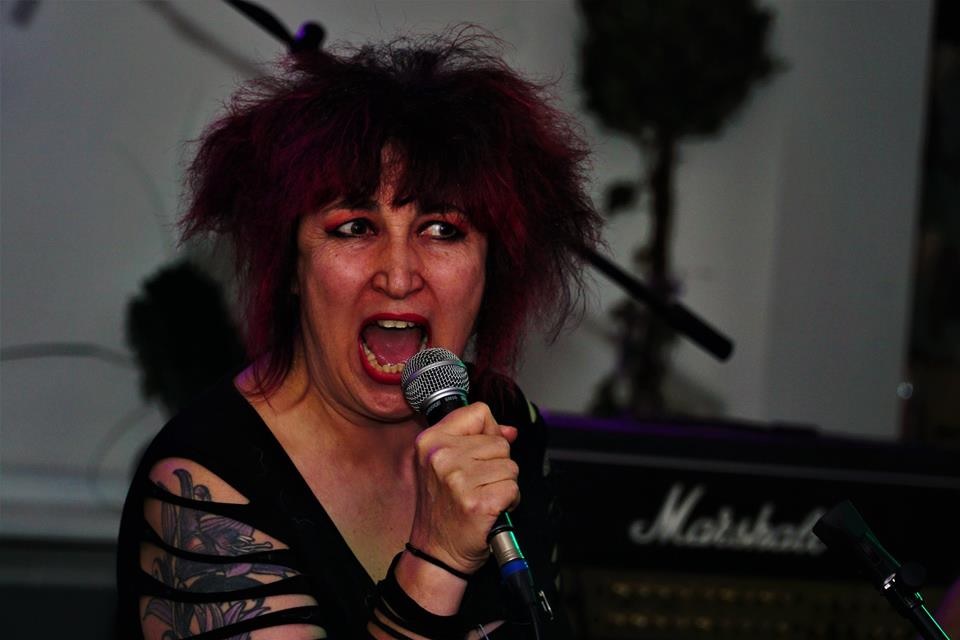 Tonight we made our way over to a very windy Bexhill-On-Sea for what has now become a very popular punk outing on a Friday night – ‘Shawnee Presents Punk at the Sussex’.

Event organiser Shawn Wright (left) with the brand new compilation ‘Punk Live at the Sussex’ CD that he has just launched and Terry Hoskin (right) at The Sussex Hotel 15.03.19 (pic Alan Poole)

On the bill tonight 4 bands and I hadn’t seen any of them before. One of the most striking things about this venue is how welcome you feel when you walk into the venue. The people of Bexhill are probably the friendliest I have ever met and they have welcomed us into their fold. 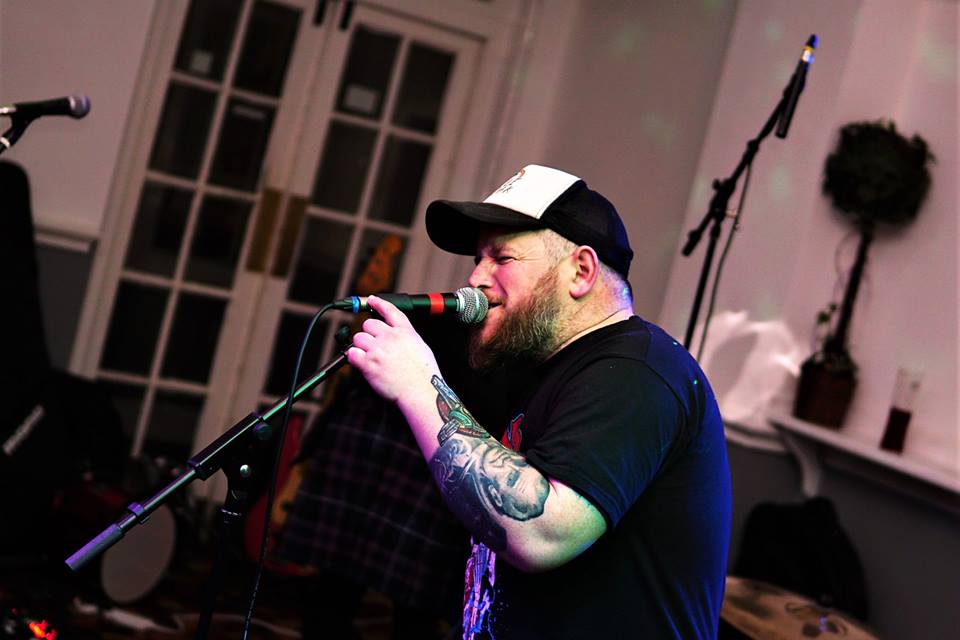 The first up tonight was a band called Crash Course. I had an inkling that they had taken their name from a very well known UK Subs song, from the Classic 1979 album ‘Another Kind Of Blues’, which incidentally is celebrating its 40th anniversary this year. Well as a raving Subs fan, it turned out I was in for a real treat tonight. Crash Course it turns out are Joe (guitar), Dan (drums), Si (bass) and John Paul on vocals. They are of course a UK Subs tribute band. 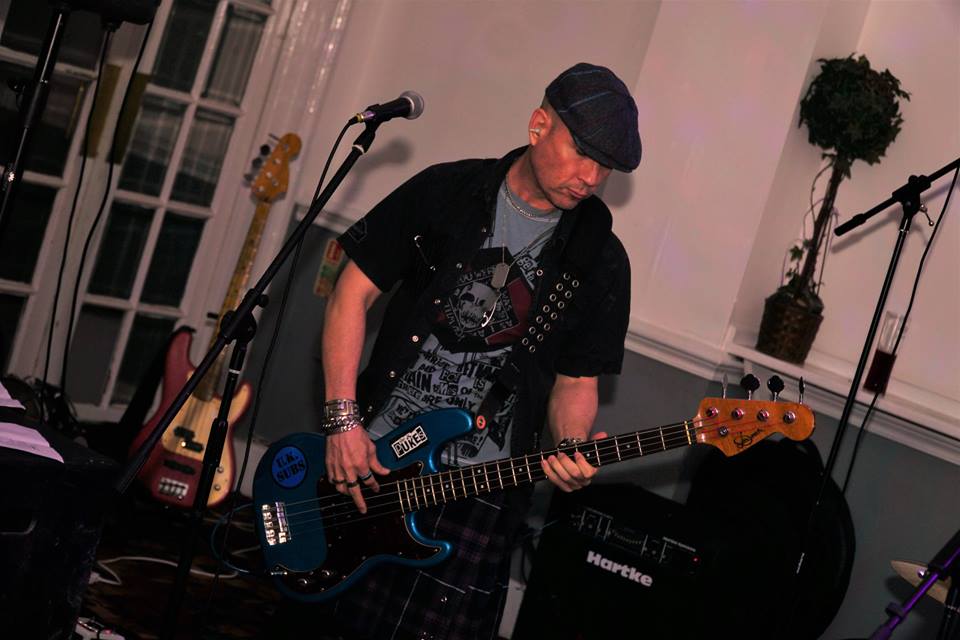 They Started off with the seminal ‘C.I.D’ and I knew that I was really going to enjoy this. Throughout the set they absolutely nailed the sound of the early subs playing the whole of ‘Another Kind Of Blues’ start to finish minus one song ‘TV Blues’. All those around me were really enjoying this and what a great warm up for the evening. You could see the boys were really enjoying the performance. They did perform one of their own songs called ‘Bovver Boys’, which was really great. Incidentally Charlie Harper and Pete Davis have made guest appearances with the band, which is a testament to how good they are. 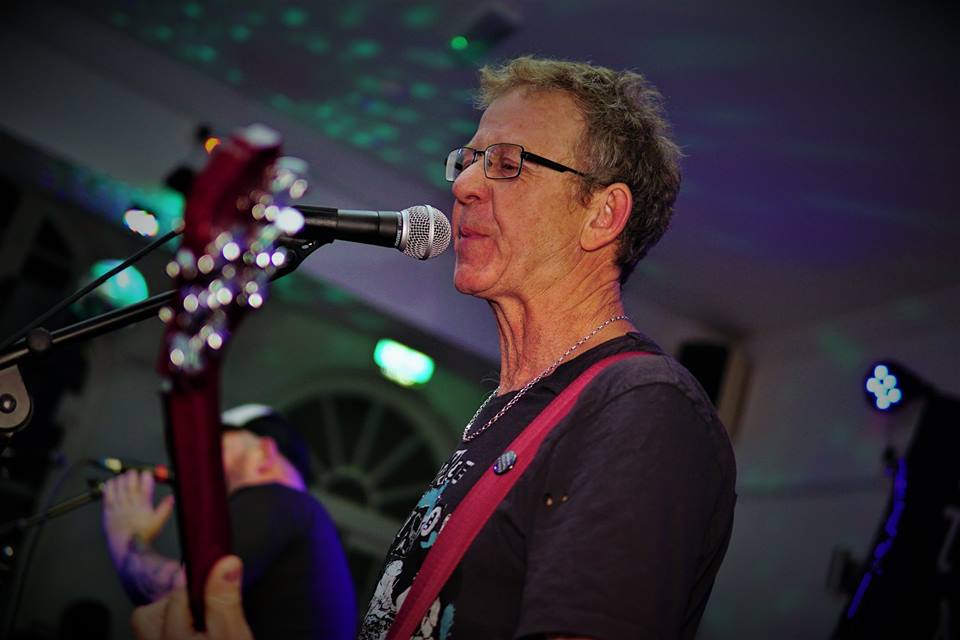 I would have liked to see more of their own material and look forward to them doing just that in the future. 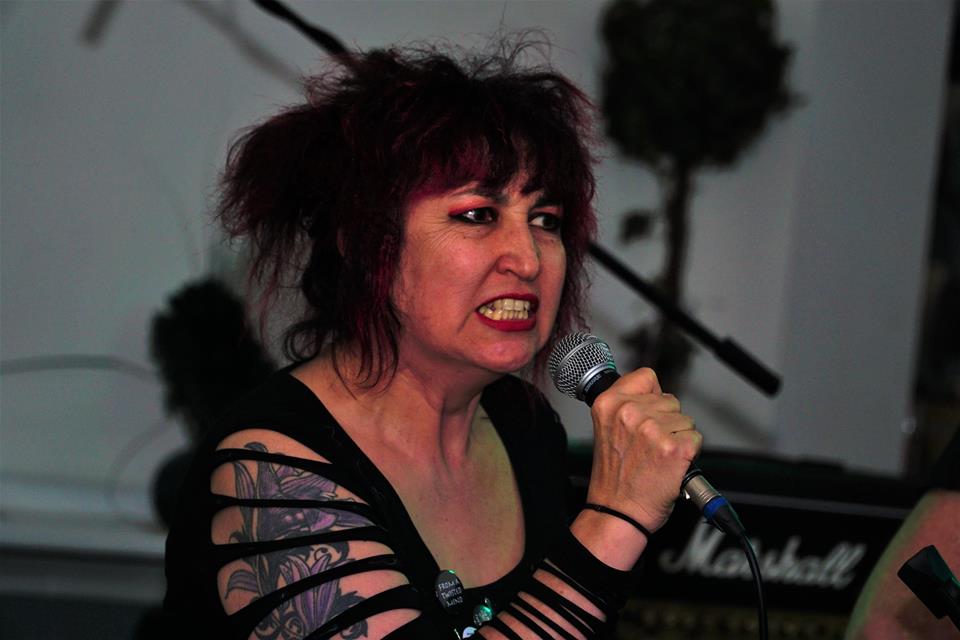 Next up were Pond Life who hail from Southwick, to the East of Brighton. The band are Bunny (vocals), Psycho (guitar/vocals), Mr Blonde (bass) and Animal (drums). They describe themselves as fun alternative punk! Audience participation obligatory! I have to say this was absolutely on the nail. Bunny looked like she was up for a fun night from the off. The kicked off with a bit of a ditty using Blurs ‘Park Life’, as ‘Pond Life’,which I have to say was really cool and funny at the same time. I really enjoyed their set, with every song about something serious and at the same time funny. Three highlights for me were ‘Mediocre Failure’, ‘Distillery Hilary’ and ‘Stupid Song’. 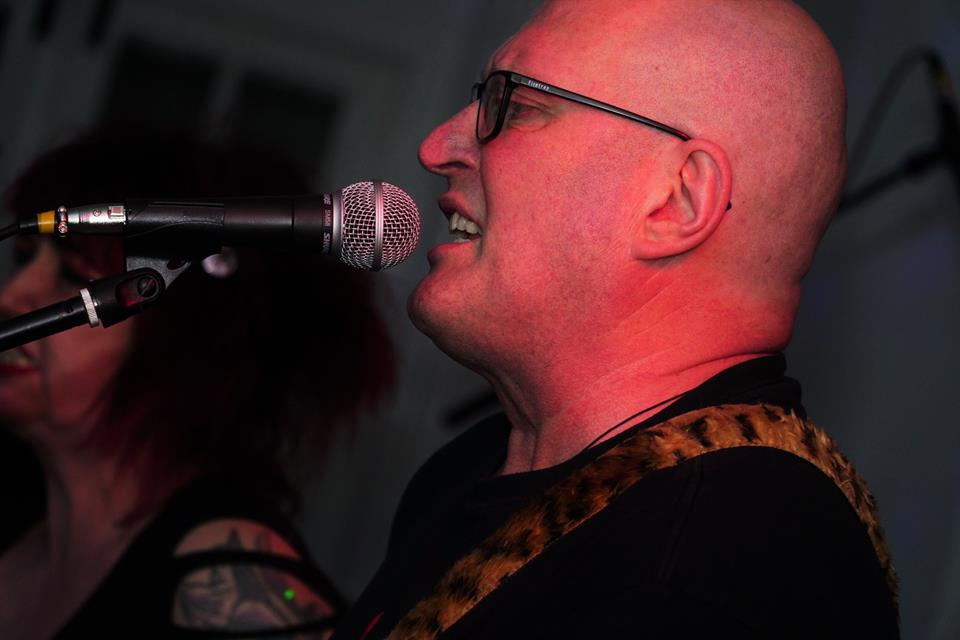 Someone near me said it was like punk, female Chas’N’Dave, I suppose they had a point, but I thought Bunny nailed it on the night. She has an air of fun about her and she really delivered that to all of us and we really enjoyed it. I hope they can record their songs because I for one would have purchased a CD from them last night. Brightened up my weekend! Thank you. 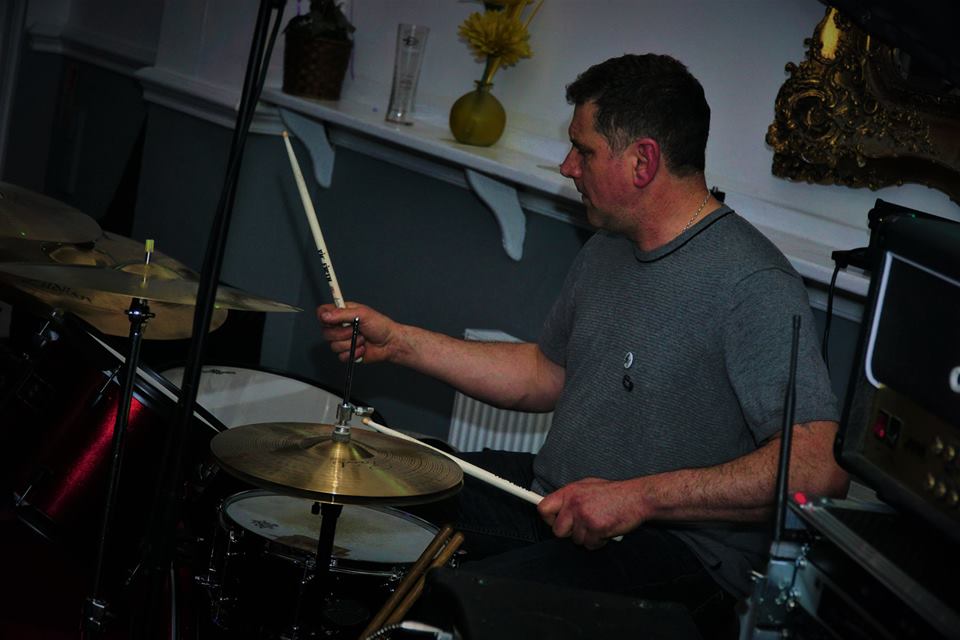 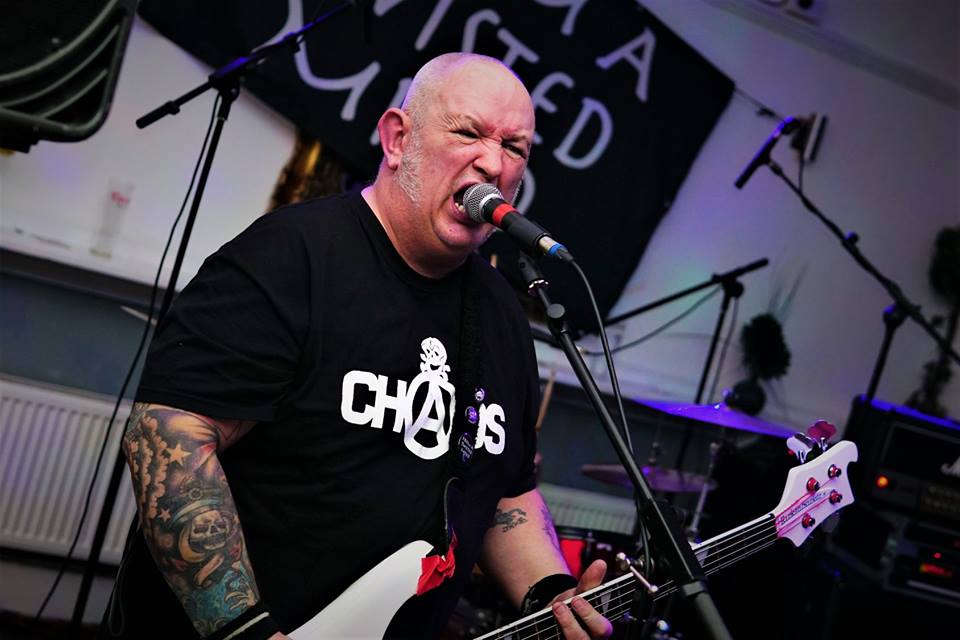 Next up were L.O.A.D (League Of Angry Drunkards). These guys travelled all the way from Lowestoft to play for us tonight. The band are Big Al (bass/vocals), Big Tony (drums/vocals) and Big Dave (guitars/vocals). I wasn’t sure what we were going to hear from this band, as I hadn’t even had time to look them up. Anyway, my message to you all is Wow!!! I didn’t expect that. They describe themselves as Punk and Oi! Hard hitting riffs, brutally honest lyrics, a f***in good sense of humour, guts and thunder!! and that’s exactly what we got. 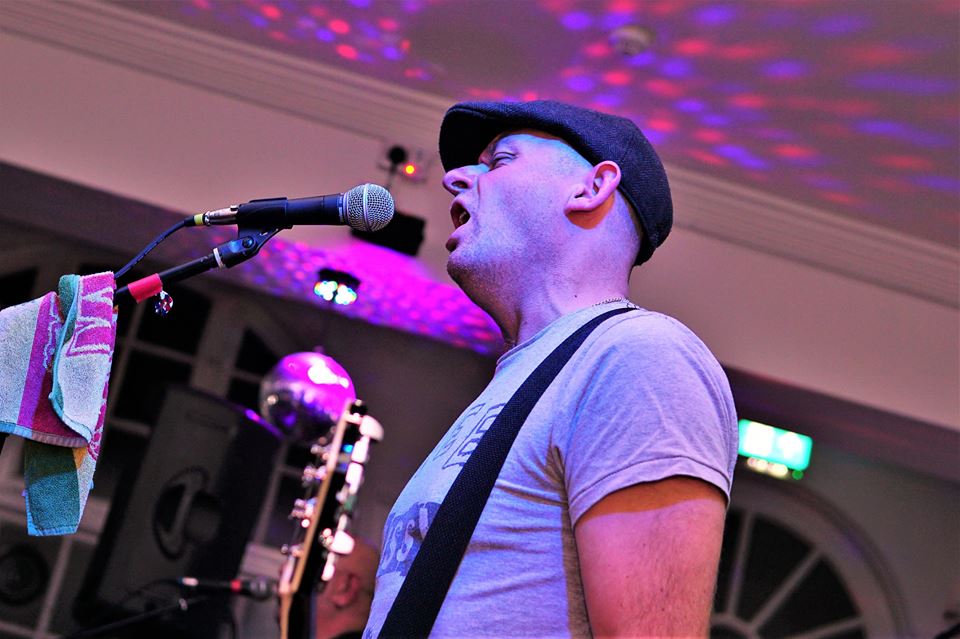 Hooked from the first riff and standing there thinking, I’m gonna love this and I did. The musicianship and performance from the band was great and was right down my street. There were a couple of covers in the set and they made them their own. Highlights were ‘Diamond In The Rough’, ‘Cuppa Tea’ and ‘Blood On The Streets’ ,but to be brutally honest I loved the whole set. I met the band before and after the set and what a great bunch they are. I hope to see them again soon and look forward to playing the CD I purchased from them – great tee shirt too. 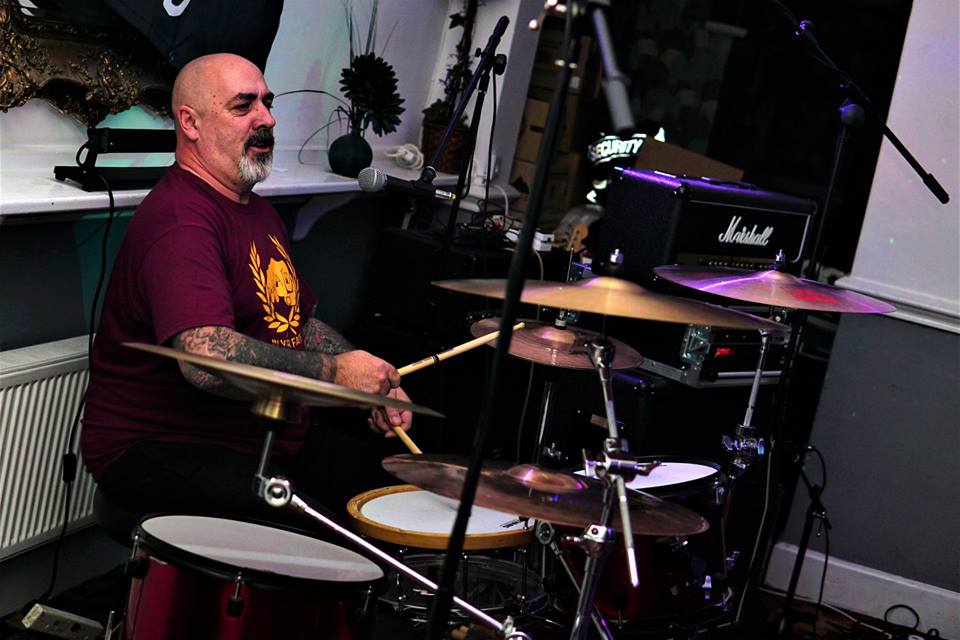 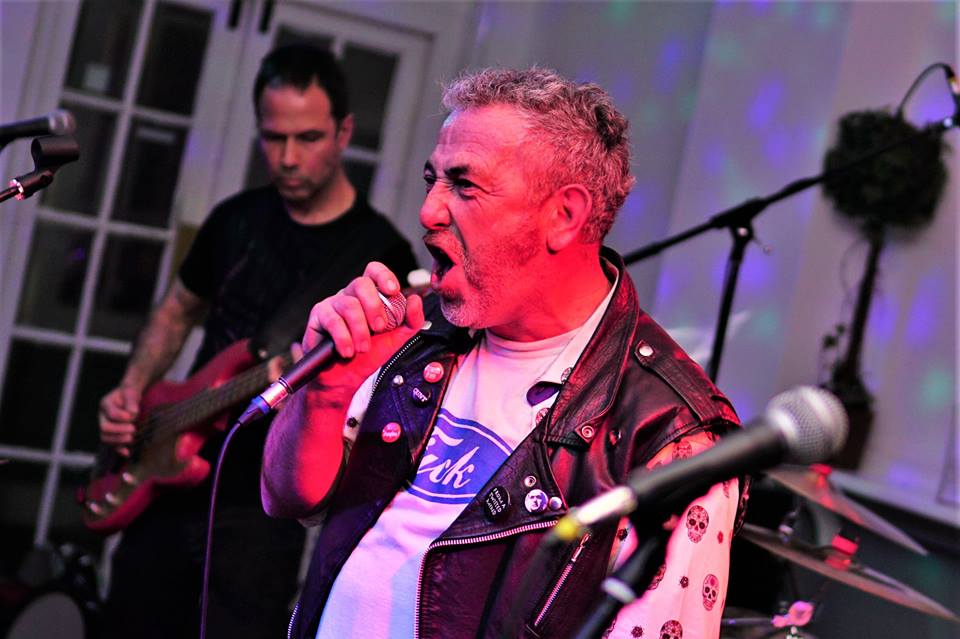 The last band on tonight’s bill were ‘From A Twisted Mind’. I hadn’t come across these either, so didn’t know what they would sound like. Again, we were in for a treat. The band are a Chichester based Post Punk Prog band writing and recording their own songs, drawing inspiration from many genres, bands and styles. The band are Johnny Rossiter (vocals), Lee Wagstaff (guitar/vocals), Andy Richardson (bass/vocals) and Den Taylor (drums). 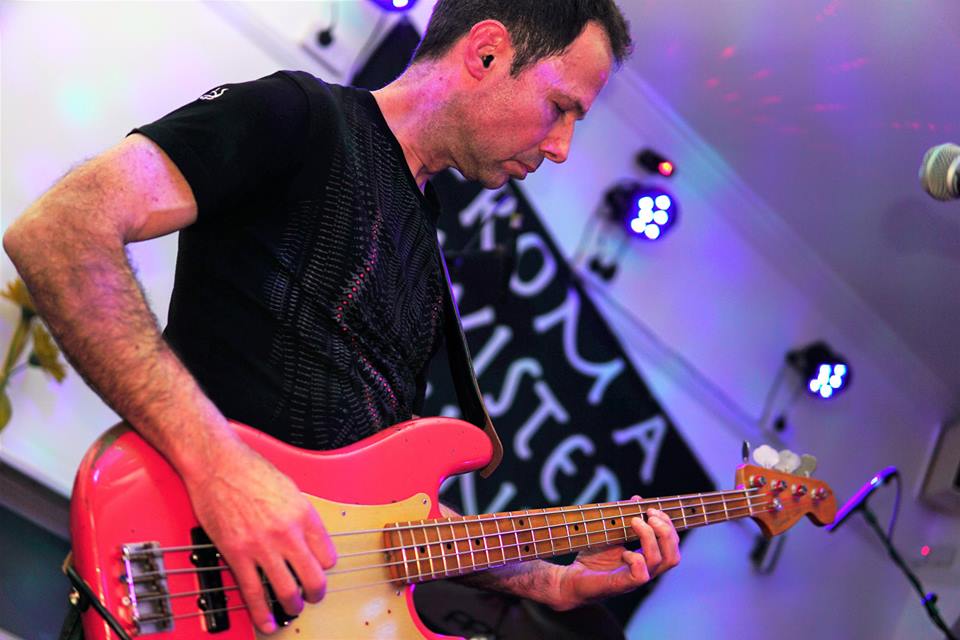 The set started with ‘Let Me In’ and I loved the sound. The lead guitar was so deep and raw. Their sound was great and I found it quite captivating. I knew that I would be getting my wallet out for another purchase before I left tonight. Each of the songs they played for us was brilliant and I can’t honestly tell you what my highlight were except I found myself immersed into their performance. Johnny on vocals is a great frontman and his performance was great. For me the lead guitar of Lee Wagstaffe, wow this guy can play and gives the band a really psychedelic sound. So in a word ‘Awesome’. 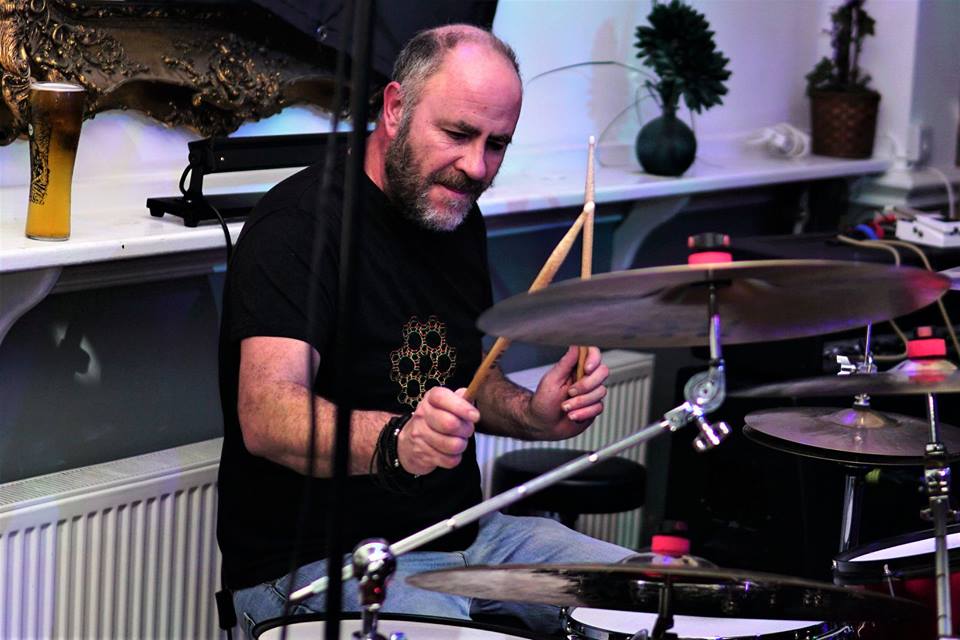 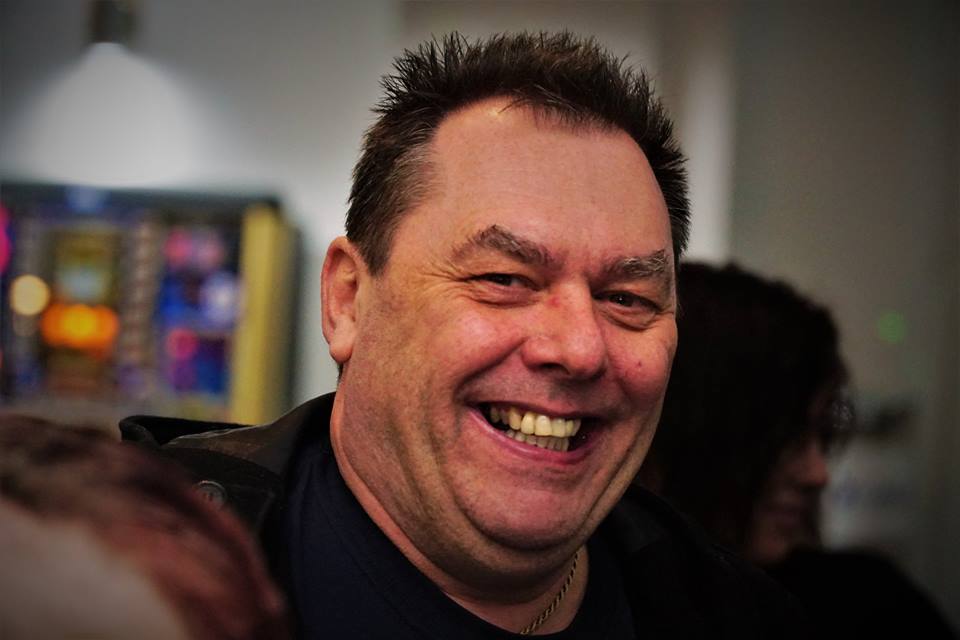 Your reviewer having a fun time at The Sussex Hotel 15.03.19 (pic Alan Poole)

Tonight’s bands were brilliant and the team of Shawnee and Richie Nice did Bexhill proud tonight. Can’t wait for next week. 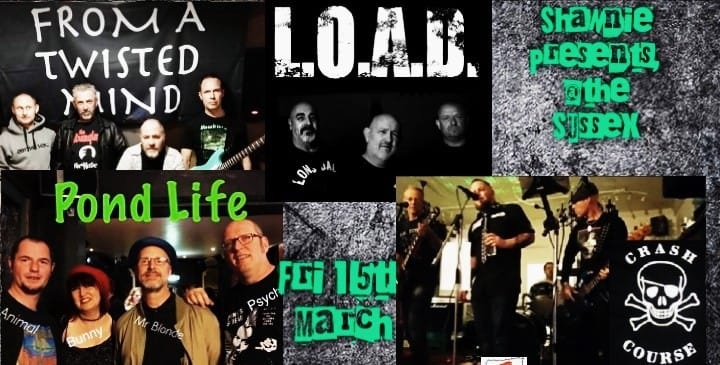 ‘Punk at the Sussex’ Limited edition compilation CD with all proceeds going to Mental Health charities…£10 in person or £12 including p&p.