Housing was the theme of the first hustings ahead of the local elections for seats on Brighton and Hove City Council in May.

Members asked representatives of four political parties about their views on community housing and the issues facing the city.

The trust supports community, co-operative and self-build projects across Brighton and Hove.

Its aims are to develop affordable housing and other community assets by supporting groups and buying or leasing land for the benefit of the community.

When it comes to community-led housing she said that it was given priority and grants from the council had helped people to get together and make progress on their projects.

She said: “What we need to do next is have a change of mindset so we see community-led housing not as people asking for a favour but people who can help us solve this housing crisis in the city.

“Through their experience and enthusiasm they have been looking to find different ways to find housing and different types of sites.”

She told the audience of about 50 people that the Labour housing manifesto had a commitment to find 10 sites for community housing.

The party would do this, she said, within six months if returned to run the council.

Liberal Democrat candidate Duncan Moore, who is standing in Brunswick and Adelaide ward, said that the cost of living was spiralling, with 15,000 on the housing list. National changes were needed, he said, such as ending the right to buy.

He called on the council to meet affordable housing targets and work with as wide a variety of housing providers as possible, including community housing groups. 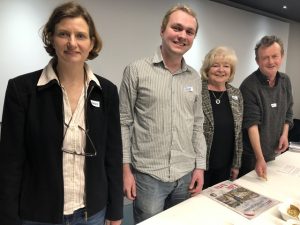 “I saw Sussex Homeless Support is looking to build quick and cheap temporary accommodation for the homeless to plug the gap between emergency accommodation and fully independent living as the solutions right now do not fit the needs of individuals.”

Conservative councillor Mary Mears, who is standing again in Rottingdean Coastal ward, said that housing was the top priority for the government and the council.

She said: “Years ago across the city there were many self-build schemes in Wilson Avenue, Woodingdean, Hollingdean, Hollingbury … These were people who could not buy on the property ladder but had skills.

“We have those skills in the city today. Not everybody has to be a tradesperson. You need a treasurer and secretary. You don’t need a trade skill.”

In the past, she said, these were supported with council mortgages and the Conservative group wanted to look at this again with the option of using the Housing Revenue Account. 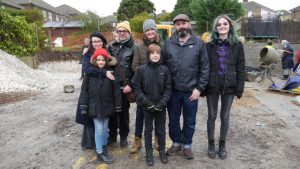 Green councillor David Gibson, who is standing again in Hanover and Elm Grove, said “Community land trusts are about local action and have fantastic potential.

“It harnesses people’s energy which is a fantastic resource for a pressured cash-strapped council.

“It has to be a priority and is an increasing priority. There is more that we can do. Capital infrastructure grants is something we can do.”

Councillor Gibson said that more homes should be built at genuinely affordable living rents, with finance made more available to developers by passing on Public Works Loan Board borrowing.

The event was the first of three hustings events accounced so far in the campaigning period.

And the Pesticide Action Network UK hosts its environmental hustings at the Brighthelm Centre at 7pm on Thursday 18 April.

All Brighton and Hove City Council seats are up for election on Thursday 2 May.

British, European and some Commonweath citizens can vote. Voter registration closes on Friday 12 April at www.gov.uk/register-to-vote.