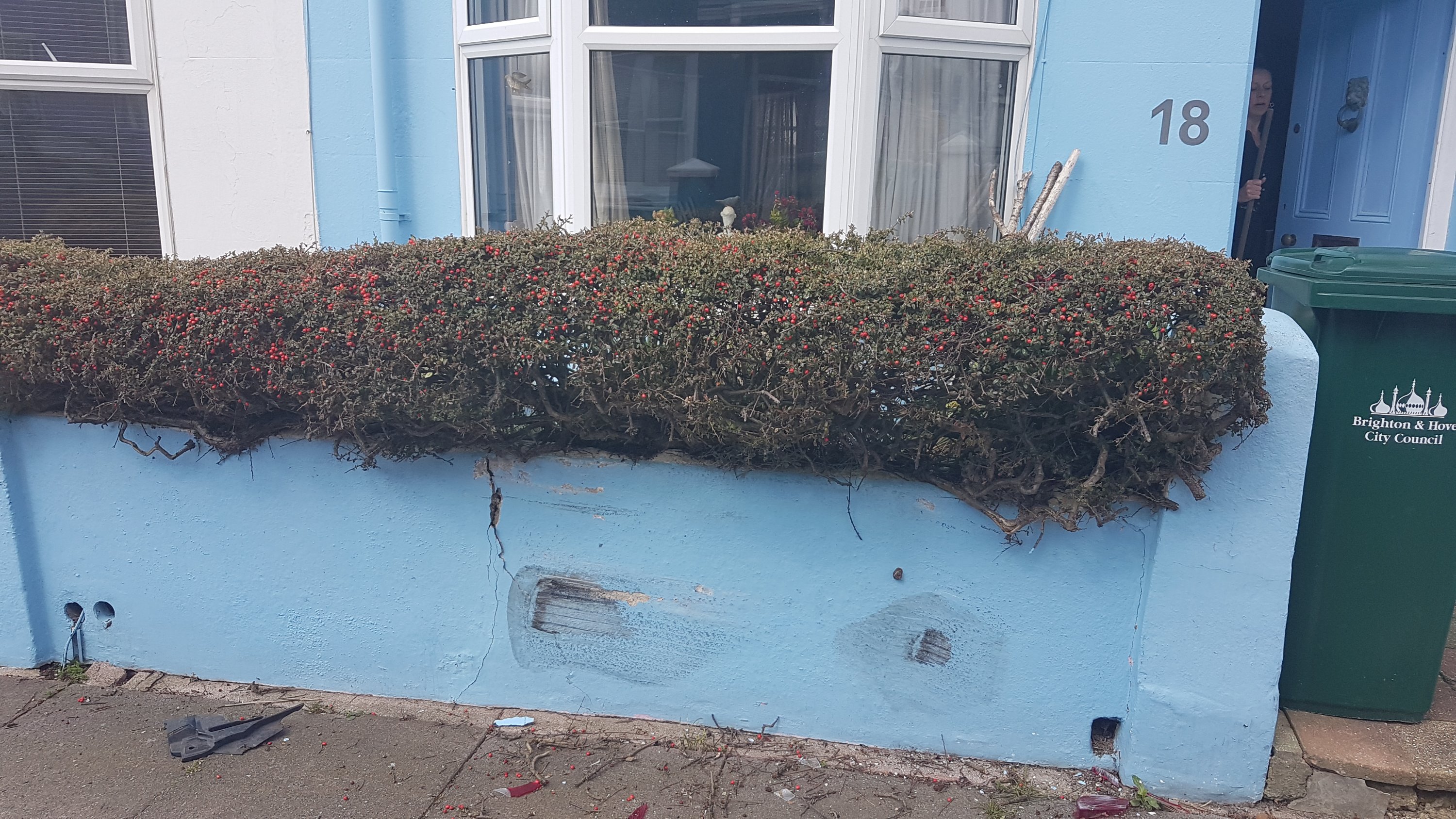 The house in Windmill Street

A mother has told of her shock when the family was woken by a car smashing into her garden wall, making the whole house “shudder”.

The smash happened in Windmill Street at about 5am. The car, a Nissan Micra, is believed to have then crashed into a car in Richmond Street then
smashed into a house in Southover Street before eventually being dumped.

Witnesses reported seeing two men and a woman in the car. The woman was seen to get out of the car in Southover Street and appeared to be injured, but was told by the men to get back in before it sped off again.

Leonie Shearing said: “Some complete turdbrain in a stolen car drove into our front garden wall on Windmill Street. The whole house shuddered but the idiot had driven off by the time I’d opened the door.

“It was pretty scary. I thought they’d actually driven into the house. It was a big smack, broken glass and bits of car on the road. The milkman just avoided being run over by the sound of it.” 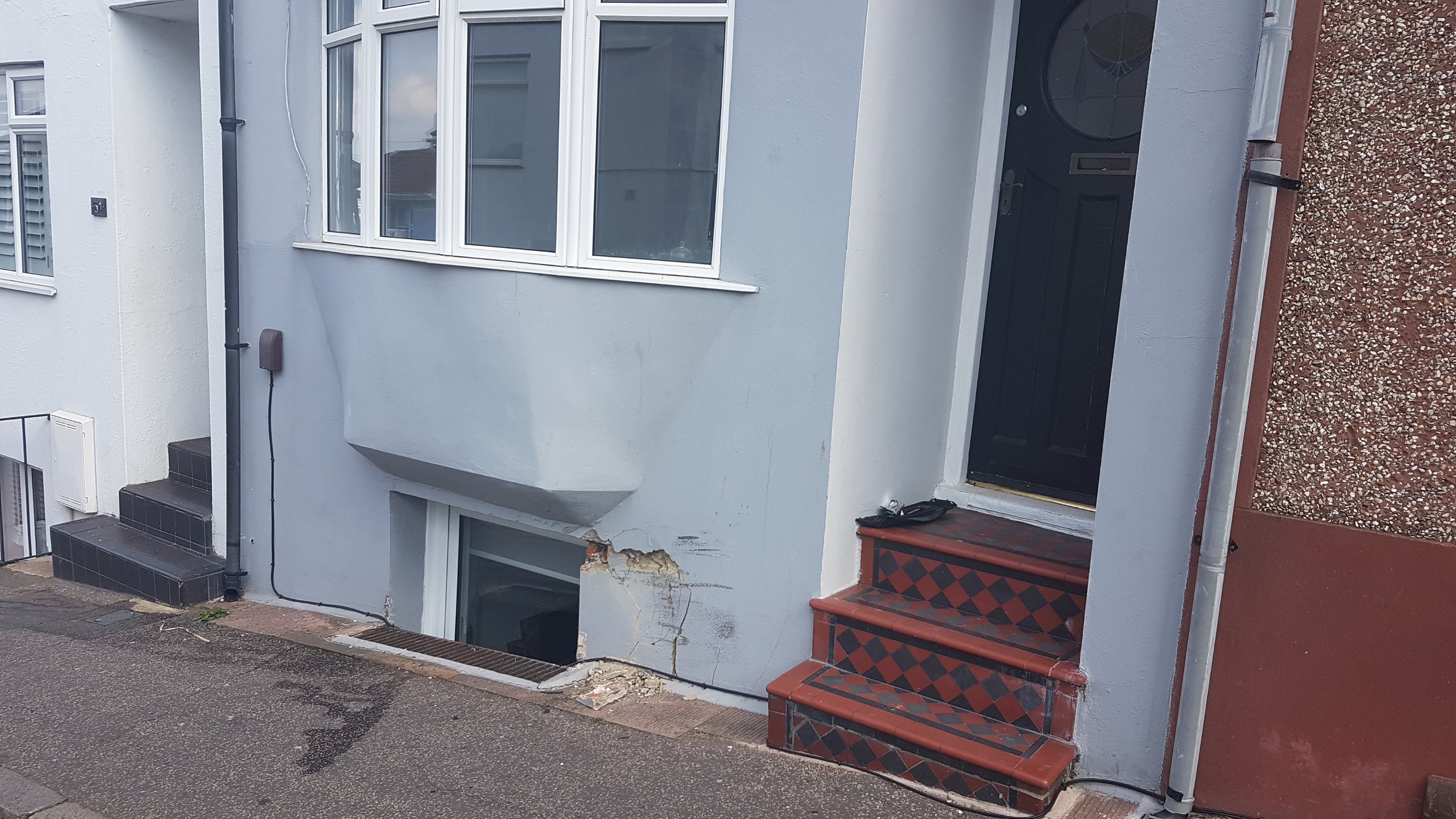 The house in Southover Street

Rob Hodges, who lives opposite the first house hit in Southover Street said: “There was a loud bang and crying so I looked out the window to see a black carin the front of the house opposite me.

“The car had been speeding down the hill where it hit the roundabout too fast and crashed. Before I could get my shoes on, they were reversing it out and drove off down the road at speed then took a left turn – that’s when we lost sight.

“Myself and two neighbours checked the house and called police – the fire brigade showed up 10 minutes later and we still haven’t heard from the police.

“I saw three people in the car, one woman who was standing outside the car crying and saying her neck and head hurt and she was bleeding.

“The two guys with her told her to get back in the car and shut the f*** up.

“Hanover is a rat run for speeding cars despite the speed humps. At the speed they were going, if anyone was walking they would have been dead if hit.”

He said that he had initially thought the car was a Fiat 500, but after checking a neighbour’s CCTV, it became clear the car was a Nissan Micra. 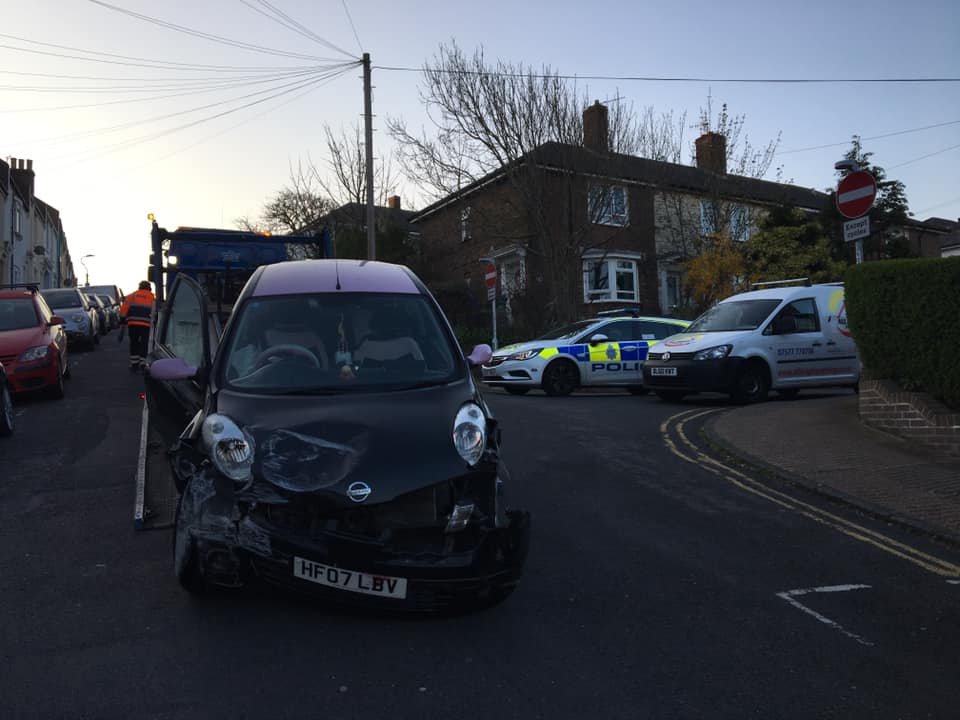 The abandoned Nissan in Richmond Street

A police spokesman said: “At 5.13am on Friday (12 April) police received a report of a black Fiat 500 car having collided with an unoccupied house in Southover Street, Brighton, before making off.

“The impact created a crack in a wall and firefighters attended to check for structural damage. Police are seeking the vehicle and its driver.

“At 5.22am, a black Nissan Micra collided with a Toyota Prius parked at the roadside in Richmond Street, Brighton. The driver – a man in his late teens or early 20s, 5ft 9in, slim build, dressed in black – fled on foot in the direction of Tarner Road.

“Given the similarity in size and colour of a vehicle which collided with a wall of a house in nearby Southover Street, Brighton, some 10 minutes earlier, police have not ruled out the possibility that these incidents may be linked. Enquiries are continuing.”