Brighton hospital trust bosses have agreed a £4.6 million equipment upgrade aimed at tackling delays in diagnosis for a growing number of NHS patients.

The two-year programme is one of the biggest investments of its type made by Brighton and Sussex University Hospitals NHS Trust.

The trust, which runs the Royal Sussex County Hospital in Brighton and the Princess Royal Hospital in Haywards Heath, said: “This is one the largest investments in equipment upgrade that the trust has made in recent years and includes the complete replacement of all endoscopy scopes across both sites over the next two years as well as the replacement of all sterilisation and decontamination equipment.”

Endoscopy is a procedure where the inside of a patient’s body is examined using an endoscope which is a long thin flexible tube with a light and video camera at one end.

It is used to look inside, for example, a patient’s digestive tract or genitourinary system.

At the Royal Sussex, the Endoscopy Department is on the ninth floor of the Thomas Kemp Tower.

The agreement to spend such a big sum comes after the department’s performance continued to deteriorate.

This was despite extra efforts being made to reduce the number of patients waiting for more than the target of six weeks to be seen.

In January the hospital trust board was told that more than 35 patients in December were waiting for more than six weeks to be seen.

The trust said: “Most of these patients require enhanced sedation which compounds delays as there are constraints in anaesthetist capacity and significant nurse endoscopist shortages.”

At the trust’s March board meeting, members were told that performance worsened in February with more than 180 patients waiting more than six weeks.

The board was told that additional diagnostic appointments and clinics at weekends were operating to try to reduce the delays.

More specialists had been recruited and trained in January and the trust was also paying for “additional outsourced support in March to provide additional capacity”.

But in April there were more delays, according to an operational performance report prepared this month by senior executives at the trust. 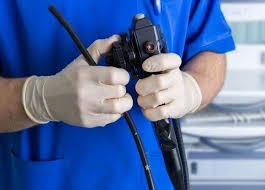 The report said: “Endoscopy and imaging capacity challenges are the biggest contributor to the difficult performance.”

It said that the trust “has constructed and agreed recovery plans” for imaging and endoscopy services which aim to bring performance into line with clinical targets by September.

The report added: “The associated activity and recovery trajectory is reviewed weekly with NHSi (NHS Improvement).

“Options for additional capacity and productivity in both imaging and endoscopy are under scope.”

In a report to board colleagues, trust chief executive Marianne Griffiths said: “The Endoscopy Department underwent a successful Joint Advisory Group on GI (gastrointestinal) Endoscopy (JAG) inspection at the end of April.

“JAG accreditation is an important external endorsement of services.

“The inspection team were very complimentary about the nursing leadership and recognised the significant work that had been undertaken in the department over the past 18 months.”

One NHS insider said that the inspection and accreditation appeared to place more emphasis on having policies and procedures in place than on operational performance and patient outcomes.

They pointed to a national “workforce review” two years ago which flagged up a rise in demand for endoscopy services, particularly among the growing number of over-70s.

The review highlighted a growing number of bowel cancer patients, longer waits for diagnosis and a shortage of suitably qualified doctors.

It said: “To address demand, endoscopic procedures that have traditionally been undertaken by doctors are increasingly being performed by non-medical registered practitioners, known as non-medical endoscopists, such as nurses, operating department practitioners (ODPs) and radiographers.”

But it added: “The service is not coping as efficiently as before.”