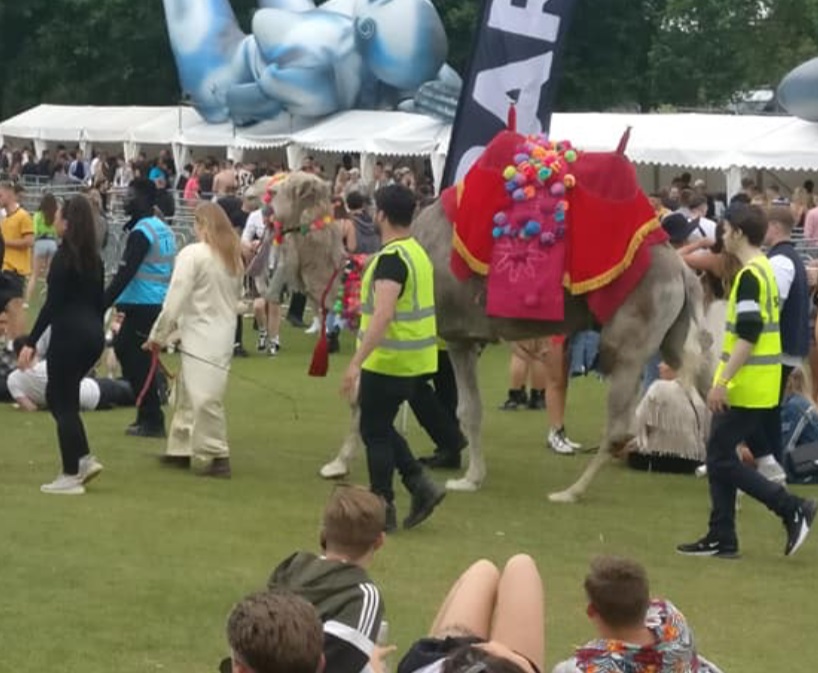 The owner of a camel which was on show at a Brighton rave on Sunday says people who complained don’t know what they’re talking about.

The camel was led through crowds of drunk revellers at the Land Beyond festival in East Brighton Park.

Pictures of the animal were soon posted on social media, leading to an outcry from animal rights activists.

This afternoon, the RSPCA and Brighton and Hove council leader Nancy Platts joined the condemnation of the stunt.

But Rebecca Fossett from J A Camels, which supplied the camel, said the people who complained – including the RSPCA – didn’t know what they were talking about, and said she was considering suing people who left critical comments on social media.

She said: “There were people who were drunk and drugged up but I didn’t really meet any of them.

“Did you know that camels like drum and bass?

“A lot of the people who complained about us probably haven’t looked after a goldfish let alone a camel.

“Public life has been coarsened by social media.

“The RSPCA know absolutely nothing about camels. They’re moronic and completely inexperienced.

“If that camel had been stressed, you would have known about it. We’ve taken camels to Bestival, Wilderness, Secret Garden and he’s also been on film sets like Aladdin.

“He’s totally used to travelling on his own. He lives with seven other camels at home.

“He sat in the middle of a pen which we put up to stop enthusiastic festival goers falling all over him.

“He sat there listening to the music and enjoying himself.

“At no point would we put an animal in a stressful situation.

“There were a lot of people there who went up to talk to us and came away with a totally different understanding of what was going on.

“My daughter has had the most galling things said about her on social media.

“On the basis of this we are going to start thinking about taking legal action.”

An RSPCA spokeswoman said: “The RSPCA would have welfare concerns about any animal – including camels – having to appear at a festival.

“The large crowds of partying people and loud music at such an event, as well as the transport there and back, is likely to be very stressful for the animal.

“We question the necessity of taking a camel to an event like this.

“In addition, animals such as camels are naturally social, so being exhibited alone, without a suitable companion animal, would compound the stress.”

Council leader Nancy Platts said: “I am horrified to hear about a camel being used as an attraction at the Land Beyond festival in the city.

“There was no mention of this on the event plan submitted to the council by the event organisers and if the organisers think this is an acceptable way to behave, then they can forget about coming back to Brighton & Hove.

“I understand the animal warden team was made aware of the festival’s plans at very short notice when alerted by another local authority.

“Every effort was made to check the animal’s welfare, this was understandably the animal warden team’s priority.

“As landlords of the park where the event took place, we have the right to refuse permission. This is what should have been done, even at the late stage we became aware of the plans.

“I will personally ensure procedures are tightened to prevent a similar situation happening in the future.”

The event was organised by Events Runway Ltd, whose directors are Luke Ralph and Abraham Saliba.

Mr Ralph is also a director of Supercharged Events and has been involved in the running of the Shakedown and Boundary festivals.

Mr Saliba owns Shooshh nightclub on Brighton seafront, which in 2016 cancelled a Pride Zoo event, which was billed as featuring live animals, after complaints from animal rights activists.

Events Runway and Land Beyond were contacted for comment.