A formerly derelict allotment can become a full-time forest school after councillors approved the plans.

Bee in the Woods currently operates three days a week at the Foredown Allotments in Thornbush Crescent, Portslade.

The owner Lucy Collins is licensed to use the land by Brighton and Hove City Council.

The unanimous decision to grant planning permission to change the use of the site allows her to operate as a full-time nursery school for 16 children at any time.

Mrs Collins took over the land in Portslade from the Wildlife Trust two years ago.

Members of the Brighton and Hove City Council Planning Committee were told that she and her team had removed the equivalent of three lorries full of fly-tipped rubbish from the woods.

The application received 29 letters of support and 10 objections.

Neighbours against the application were concerned about parking, noise and the impact on wildlife.

Supporters forcused on the the improvement of the site, the quality of outdoor learning and low noise levels.

A statement in support of the application from North Portslade councillor Peter Atkinson was read out on his behalf.

Councillor Aitkinson said: “Lucy has been mindful of her near neighbours in the houses that border the nursery and has responded to concerns by adjusting activities or communicating directly to establish dialogue.

“I’ve also been involved in trying to understand any issues that have cropped up and act as a facilitator.

“Indeed, if planning permission is granted today then Lucy will be able to slightly alter the internal geography of the site in response to one particular resident’s concerns.” 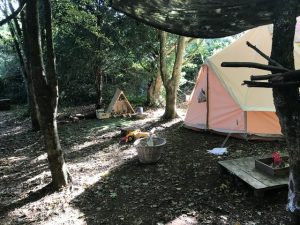 Councillor Aitkinson said that Mrs Collins and her team had worked together to clear that land which was covered in fly-tipped rubbish.

A small shed is the only perminant structure on the site, as the forest school uses tents.

Labour councillor Daniel Yates said: “This is fantastic. We know we need additional capacity for pre-schools across the city.

“This is doing so and in a very sustainable way on land that was just used for fly-tipping.”

After councillors unanimously approved her application, Mrs Collins said: “I feel very, very relieved. We are open and the children are thriving.

“It has been an amazing year. Now we’re open three days, this means we can go up to full capacity. It’s amazing.”