Anger as travellers allowed to camp by Brighton cemetery

There was anger today as travellers were reported to have been given permission to stay next to a Brighton cemetery.

They turned up in Warren Road yesterday as a funeral was taking place at the Lawn Memorial Cemetery in Woodingdean, having been moved on from Stanmer Park earlier in the day.

The sensitive site is covered by a public space protection order (PSPO) which prohibits the land being occupied by any vehicle, caravan, tent or other structure.

The order also prohibits driving any vehicle on the grass there, littering or fly-tipping, lighting a fire and defecating or urinating.

And it allows the council and police to order anyone occupying the land to remove any vehicles, caravans or tents within 12 hours or face a fine or prosecution.

One neighbour said on Friday: “Travellers are arriving by the minute on the green at the Lawn Memorial in Woodingdean.

“This site is strictly out of bounds for travellers.

“I can’t get through to Brighton council and the police are aware but can’t do anything as it’s down to the council.

“There was a funeral taking place as they were arriving and several travellers stood and watched the proceedings.

“How is this fair? There’s even a pony roaming on the grass now.”

Councillors Dee Simon and Steve Bell, who represent Woodingdean ward on Brighton and Hove City Council, said: “We have received dozens of calls and many more emails, texts and messages from residents near and far who are very upset that the travellers are on this sensitive site.”

The pair said that they had been working with council officers and Sussex Police to deal with the unauthorised encampment.

But despite residents saying that they had called the authorities, they said that police and security staff did not attend the scene until the group had settled in. 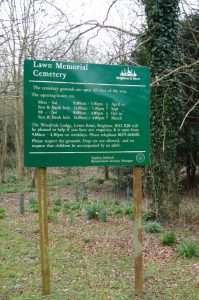 There were concerns that some vehicles had been parked alongside the fence close to graves.

The councillors said that the officers who attended refused to use their powers to issue “section 61 notices” instructing the travellers to leave the protected site.

They said: “Their reason was that they had no evidence of anti-social behaviour despite the same group having been moved on from Stanmer Park earlier in the day and the police witnessing the dangerous driving at speed of large and small vans across the grassed area.”

Councillor Bell said: “We were expecting an immediate vacation and are disappointed that the council has failed to request this from the police.”

Councillor Simson said: “I’ve even had a message from someone in Spain who has a relative buried in the cemetery and feels the occupation of this site is highly disrespectful.”

Local residents are being urged to report any anti-social behaviour they witness on 101.

About eight to ten caravans were still on the site this evening, along with other vans and lorries.

According to the council’s website, 13 of the 21 pitches at the transit site in Horsdean were vacant.

There was also reported to be another unauthorised encampment on land next to the Race Hill Allotments, off Wilson Avenue, in Whitehawk.

The council said: “There is an unauthorised encampment of van dwellers in on land adjacent to Wilson Avenue.

“The council gained a possession order in the county court on (Friday) 2 August. An eviction will be carried out as soon as it is practical.”