The future of a controversial road layout scheme in the centre of Brighton is due to be decided tomorrow (Friday 13 September).

A committee will decide whether to recommend £6 million funding for phase 3 of the Valley Gardens project.

The scheme would see the Aquarium roundabout replaced by traffic lights, a new road layout for Old Steine and Madeira Drive become entry-only by the Palace Pier.

The taxi trade in Brighton and Hove, a bus company boss and others have concerns about road safety and the effect on traffic congestion and pollution levels.

But if the Coast to Capital Local Enterprise Partnership’s Investment Committee approves funding, its decision is expected to be rubber-stamped when the LEP’s board meets next month.

A report to the Investment Committee said that the scheme offered “low value for money”.

The rules say that approval should be given only to those schemes offering “high or very high value for money”.

But the report said that Brighton and Hove City Council had assured the LEP that the project offered wider benefits that had not been included in its funding application.

Critics said that the scheme would require changes to the Duke’s Mound junction and would spread and displace pollution and create even more traffic jams.

Phase 3 of the Valley Gardens project would complete a scheme which is currently under way from St Peter’s Church to the seafront.

The aims include making the green spaces easier for the public to use, creating more dedicated cycle lanes and rerouting traffic to the eastern side of the area.

Despite the expected disruption during construction, Phase 1 and 2 of the project had wide support until a year ago.

The council then ditched a broadly accepted design for phase 3 in favour of one that has generated considerable opposition.

A new business and community group, the Valley Gardens Forum, was formed to give voice to those opposing the current preferred design. 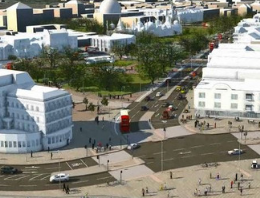 The Forum has urged the LEP’s Investment Committee to withhold funding until the council carries out a genuine consultation and looks again at the proposed layout of the area.

It said that not only did Phase 3 offer “low” value for money but the council had failed to consult properly and was ignoring cross-party requests for a pause and a rethink.

An internal audit is under way but the council is not expected to report the findings until January.

The Forum urged the Investment Committee to put off making its funding decision until the audit findings had been published.

The council has given the LEP various assurances despite the threat of a judicial review of the decision-making process.

The report to the Investment Committee said that mediators had failed to enable the council and the Forum to reach agreement.

But the committee’s remit was limited to funding and any legal challenge was a risk that the council would have to bear.

The LEP’s Investment Committee is due to meet in Crawley tomorrow at 10am.