They also agreed that Brighton and Hove City Council should work with schools to support young people who want to take part in the protest.

They gave their backing at an urgent meeting of senior councillors at Hove Town Hall to discuss the proposed climate strike on Friday 20 September.

It is the latest in a series of monthly climate change protests which started in February.

Two of the young people who plan to take part – Uma Krieger and Annapurnea Marley – listened to the town hall debate and were delighted with the outcome.

Miss Krieger said: “It is really great to get it passed. I hope everyone who was not allowed to strike will now be able to.

“It is really good to have the support of adults and the majority of the council.”

Miss Marley told councillors that students were not protesting at the weekend because they did not believe that people would take any notice of them if they did.

Councillor Platts, the Labour leader, praised the young women for coming along to speak on behalf of the campaign and enabling the action to happen.

She said: “As someone who was involved in environmental issues more than 30 years ago, I wish we had done what you have years ago as maybe we wouldn’t be in the mess we are in now.

“You have been inspirational with your leadership on this issue and I look forward to joining you along with other members of the Labour Party at the climate strikes.”

Pinaki Ghoshal, the council’s executive director for families, children and learning, said that it would be up to schools to decide whether students could take time off lessons.

But, he said, the council would send advice to head teachers, suggesting that they require written permission from parents for their children to be out of school.

Secondary school pupils should have a member of staff accompanying them to the march.

Primary school pupils would be expected to collect them for the event.

Mr Ghoshal said: “It is not for the council to tell schools what they should do. We have provided some guidance and each school can make its own decision.”

The GMB union has stepped in to help the strikers work with Sussex Police to organise an official route and marshals after concerns were raised about safety.

Conservative deputy leader Mary Mears asked about councillors’ responsibilities as corporate parents but was told that this related to children in care.

And were an accident or incident to occur during the climate strike, she was told that the council would be liable only if it was directly responsible for the accident.

Councillor Mears voted against offering guidance to schools and allowing council employees to take part in the strike.

She also asked the campaigners to encourage more people to walk to school. The former council leader said: “There is a serious issue around our schools with parents dropping off children and the amount of cars and pollution and congestion.

“Perhaps you should look at the wider issue in the city about encouraging parents to allow their children to walk at school or park not so close to the school gate.”

Miss Marley said that the campaign was about the bigger picture as there was limited time to tackle climate change.

She said that stopping people driving would be a small dent but going big was a better use of their energy.

Councillor Mac Cafferty was disappointed about the lack of road closures on Clean Air Day given that the council had declared a climate emergency. He said that a lot of the work to encourage people to cycle was already under way. 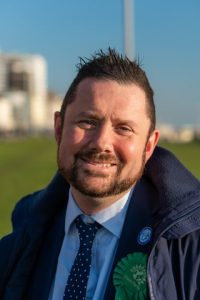 The Green group convenor said: “In effect this is a reaffirmation of what the council is doing that doesn’t necessarily represent anything new or original. We have missed a trick.”

He said that the mayor of London was closing 20km of roads on Sunday 22 September, Car-Free Day, and that the whole of Hastings seafront would also be car-free.

A report into car-free days is being prepared for a meeting of the council’s Environment, Transport and Sustainability Committee on Tuesday 26 November.

Council employees will be permitted to take part in the climate strike using annual leave, flexi-time or unpaid leave, with their manager’s permission, provided essential services are maintained.

The committee also agreed to support the United Nations e-learning climate change course and train at least one teacher in the subject in every state school.