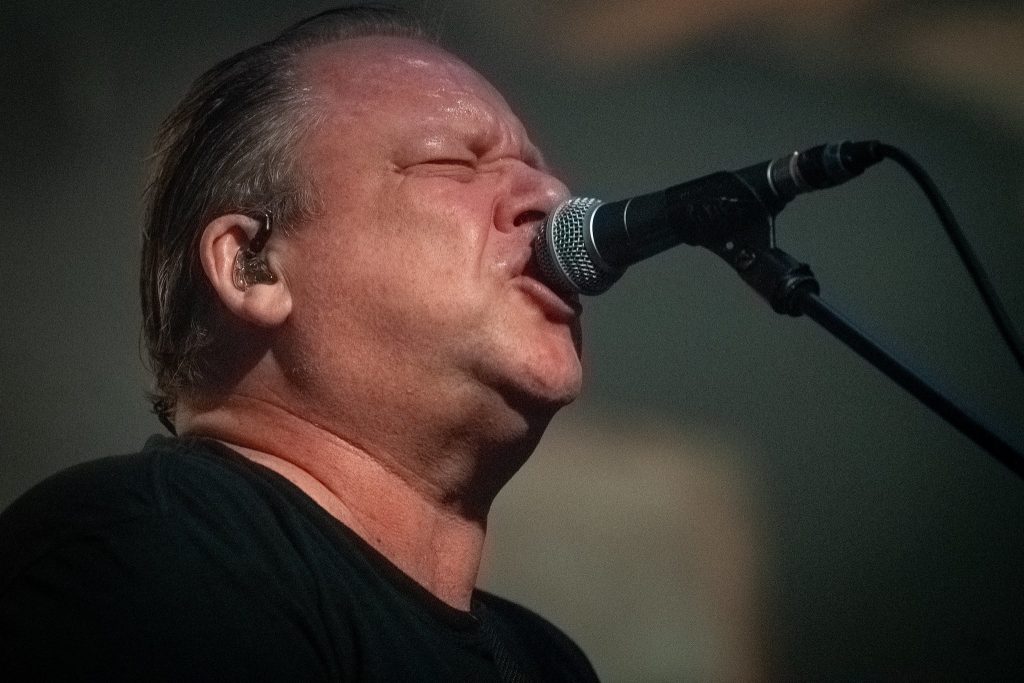 If you were into the alternative music scene in the late 1980’s and early 1990’s, you’ll probably already know about The Pixies. Formed in Boston, Massachusetts in 1986, their distinctive sound with surf tinged guitar and alternating loud and quiet dynamics found them an enthusiastic audience amongst the indie kids of the UK and Europe. They were initially signed to the 4AD record label, and released four albums which are still widely regarded as classics: ‘Surfer Rosa’ (1988), ‘Doolittle’ (1989), ‘Bossanova’ (1990) and ‘Trompe le Monde’ (1991).

Based around the songwriting of guitarist and vocalist Black Francis, the music’s marked dynamic shifts are often underlined by contrasting sections of sweet melody and raucous frenzy. This style blazed a trail for a number of successful acts who employed similar techniques, Nirvana and Radiohead being the most obvious examples. The Pixies split up in 1993, but have been back together since 2004. Original bassist Kim Deal departed in 2013, so Paz Lenchantin has since joined longtime members Joey Santiago on guitar and David Lovering on drums.

The band has been steadily releasing new material. ‘Indie Cindy’ (2014), a collection of EP’s, was followed by ‘Head Carrier’ in 2016. The current tour is showcasing the eagerly awaited new album ‘Beneath The Eyrie’, released (tomorrow) on 13th September 2019 by BMG/Infectious. The itinerary takes in eleven UK dates before heading around Europe, and the first stop is at Bexhill in East Sussex, at the De La Warr Pavilion, an iconic gem of modernist architecture right on the seafront.

This is quite a coup for the venue, who in return have afforded the band rehearsal facilities. The plan for the tour is to play a long set with no support, choosing numbers randomly from the entire back catalogue according to the vibe of the room and the mood of the audience. Given the extent of the repertoire, this obviously needs quite a bit of preparation. All week long, a brace of Stardes stage trucks in Euro flag livery have stood sentinel outside the Pavilion, whilst the venue’s curious daytime patrons have speculated on the nature of the music emanating from the locked down auditorium.

As showtime approaches, there is a huge buzz of anticipation. Tickets for the event sold out very quickly, so the main hall will be full to its 1,500 capacity. Although it’s a day before the official release, in-house independent record store ‘Music’s Not Dead’ have permission to sell the album before and after the show, and plenty of copies of the CD and white vinyl LP are flying across the counter. 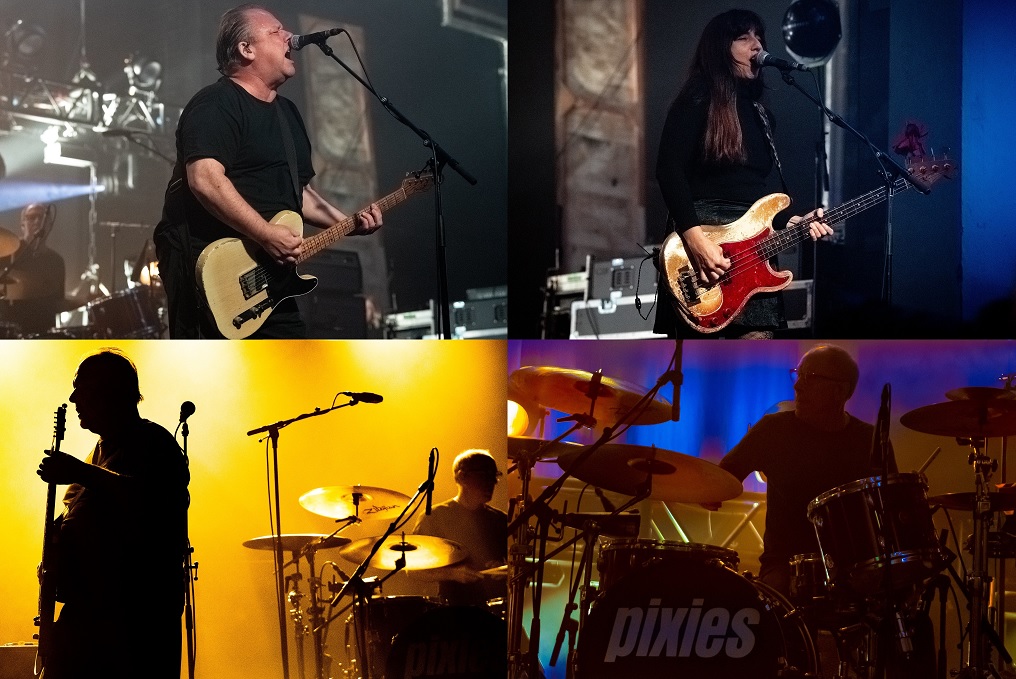 Inside the hall, the band takes the stage as promised at 8pm, and launches into the moody intro to ‘Gouge Away’, the opening number of a set that’ll take the best part of the next two hours. The four band members are clad in black, and for the most part are silhouetted by a powerful array of lighting fixtures, supported by industrial looking trusses that form the stage backdrop.

Centre stage, amidst the wash of green light, is the familiar figure of Black Francis, wearing a dark T-shirt, and dispensing jarring jolts of rhythm from his Telecaster guitar through Vox amps. House left is Joey Santiago, wearing a black flat cap and wrangling twanging lead guitar through a Les Paul and Marshall stack. To the right, bassist Paz Lenchantin supplies the pick driven bass that is so characteristic of The Pixies’ sound. She has long dark hair, and stands in front of an Ampeg stack that is almost as tall as she is. Up on a formidable riser, David Lovering pounds away at a huge red drum kit emblazoned with the band logo on the front skin. He holds his snare stick in the ‘traditional’ (rather than overhand) style, like a jazz drummer.

There is no chat or banter between songs at all, and no announcement of the numbers. A bass intro, punctuated by sharp bursts of rhythm and lead, takes us straight into ‘On Graveyard Hill’ from the new album, and I have to say it’s a cracking piece of work with the classic Pixies sound and vibe. Piercing bursts of blue light punctuate ‘Monkey Gone To Heaven’, an indie classic which needs no introduction anyway. ‘Cactus’ has a rock’n’roll vibe, and for the falsetto, semi-spoken vocal of ‘I’ve Been Tired’, Black Francis stands silhouetted by bright white light.

‘St Nazaire’ is another track from ‘Beneath The Eyrie’, and again it’s a quality piece, with twanging guitar and a mood of insistent urgency in the verses, contrasting with a weary vocal figure of ‘I’m all done talking to you’. I‘m looking forward to getting my copy of the LP home for a spin. A big drum roll takes us into an old favourite, ‘Rock Music’, and dazzling white light bombards the audience for ‘Caribou’. The languid vibe of another new number, ‘Death Horizon’ is embellished with jangling trebly arpeggios.

Black Francis plays acoustic guitar for ‘Here Comes Your Man’, which is about as poppy as The Pixies get. Its familiar strain sets off a knot of enthusiastic dancing near the front. Bassist Paz takes the vocal for ‘All The Saints’, which has a pulsating tremolo intro. There’s a big cheer for old favourite ‘Where Is My Mind’, and the dancing is getting more vigorous. A moody wash of blue light accompanies ‘Wave Of Mutilation’, and Joey Santiago unleashes a blistering sustain solo on chant-along ‘Ed Is Dead’. The bouncing fans are getting more altitude now, and the dancing is spreading out across the front of the hall.

‘Bird Of Prey’ is another new number, with a jolly surf guitar jangle contrasting with a dark brooding lyric. The lights have turned the proscenium blood red, and a powerful spot is throwing a massive shadow of the drummer, perfectly in focus, across the whole left hand wall of the room. The lashing vitriol of ‘Nimrod’s Son’ is followed by the opening track of the new record, ‘Into The Arms Of Mrs Mark Of Cain’, which is as inventive and intriguing as its title would suggest.

The set continues relentlessly, still without any chat or announcement, just one great song after another. I won’t describe them all, as it’s clear this is going to be an epic set. Some of the highlights for me include the clever lead and rhythm interplay in ‘Hey!’, and the long guitar outro to ‘No.13 Baby’, with the lights going into swirly psychedelic mode. ‘Debaser’ is probably my favourite Pixies track of all, though being a squeamish type I don’t think I’d like to see the film the lyrics are describing (‘Un Chien Andalou’ by Luis Buñuel and Salvador Dali) with its ‘Slicin’ up eyeballs’ scene. ‘Gigantic’, with Paz taking the lead vocal, has my wife and I remembering dancing to it back in the day at the indie club we used to frequent (The Venue in New Cross). Even we were young once. ‘Velouria’, played with the band swathed in pink light, is an absolute all-time classic.

Onstage showmanship is probably discouraged for not fitting in with the band’s overall austere aesthetic. For the final number, ‘Vamos’, Joey Santiago breaks ranks and starts hitting his guitar strings flamboyantly with his hat. He then unplugs his guitar lead and waves it in the air. There must be so many effects activated on his capacious pedalboard that the naked jack plug generates a freaky sound, like a theremin, as he swooshes it around.

The band comes to the front and takes a collective bow, theatre style, to rapturous applause. Communicating in sign language, so as not to break the embargo on talking to the audience, drummer David promises one more song. It’s a classic: ‘Ana’ from the wonderful ‘Bossanova’ album, and that’s it. After being treated to a marathon set of one hour fifty minutes, the crowd are buzzing with pleasure as they leave the hall. Best of all, it’s not even 10 o’clock yet, so there’s plenty of time for another drink at the bar before going to collect my copy of the LP from a beaming Del Querns, proprietor of ‘Music’s Not Dead’.

Getting the opening date of The Pixies’ tour was a prestigious coup for Bexhill and the De La Warr Pavilion. It was a great show, and it really felt like being part of a big event. If you like The Pixies’ music, I strongly recommend you check out the new album ‘Beneath The Eyrie’. 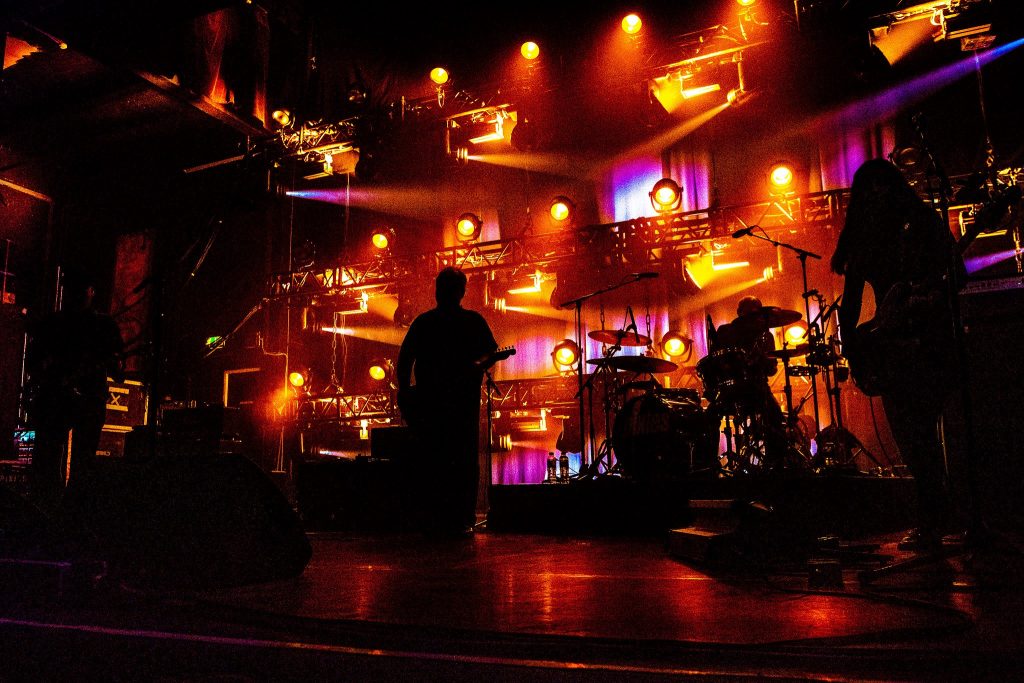 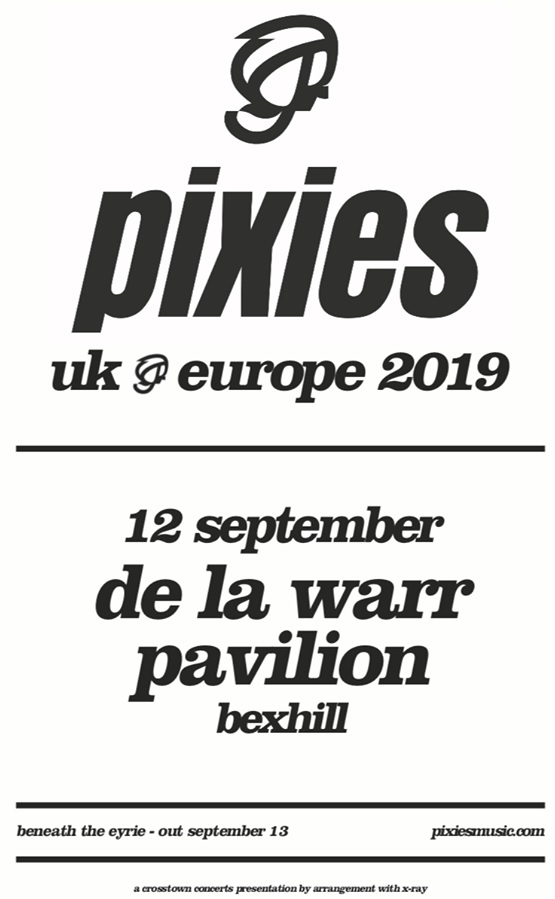