Rotten Foxes bow out in one giant mosh! 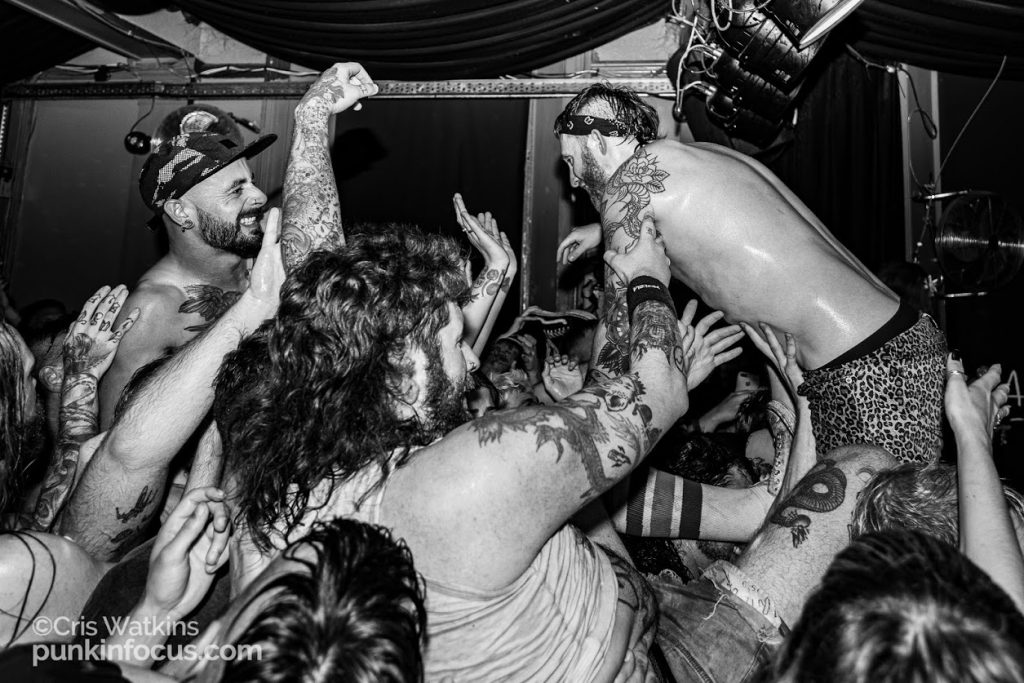 The punk fraternity is out in force tonight to bid a final farewell to Brighton’s local death-punk heroes and the outside of the Prince Albert is mobbed with fans adorning Rotten Foxes T-shirts, patches and tattoos. Upstairs it’s the same story. This show is already sold out by 7pm and there are a good few people not going to get in to see this show tonight.

First thing I notice is the Albert stage has had a bit of a facelift and gone is the old threadbare carpet that so many a band has played on and in its place a shiny new one, also the front of the stage has been slightly extended for space for the speakers, it now looks the business! 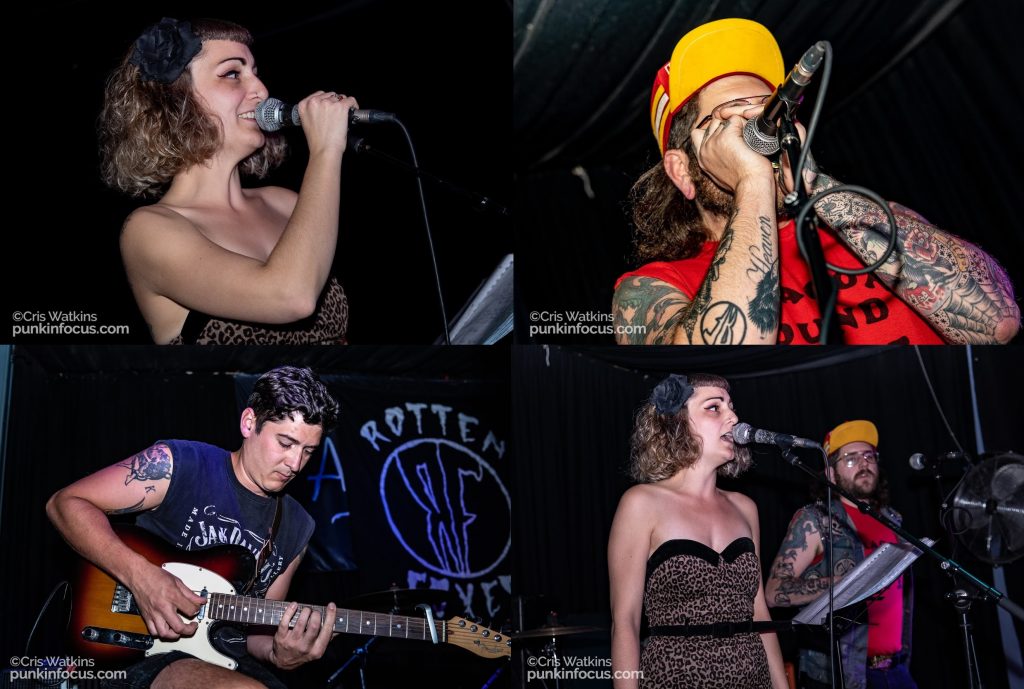 Black Cat And The Boy live at The Prince Albert, Brighton 21.09.19 (pics Cris Watkins Photography/PunkInFocus) (click on pics to enlarge!)

The Foxes have got all their mates on stage this evening and we kick off with ‘Black Cat And The Boy‘ who deliver a sedate set of rockabilly blues covers that go down really well. They are joined by Rotten Foxes bass player supreme ‘Jimi Dymond’ who takes on blues harp duty on a few of the numbers including a cracking version of the Foxes own ‘Make Me Pretty’ which gets rousing support from the crowd. 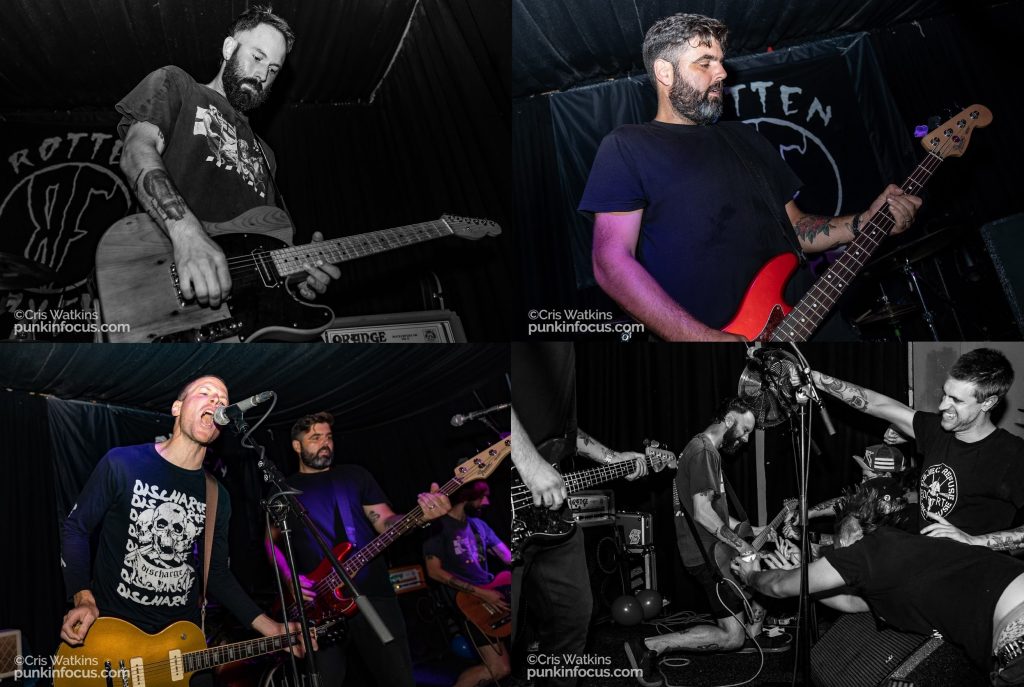 Next up is 5 piece ‘Bastad Rats‘ who if I heard correct hadn’t played in 8 years, if that’s the case then they sure as hell don’t show it as they rip through a blinding set of pop-punk ditties that you just can’t help singing along too. I’d never caught these guys before but sure glad I did, the Rats hit you with powerhouse drums, blinding riffs and shouty vocal harmonies they brought to mind a mix of early Snuff, Good Charlotte and Fall Out Boy and if that’s your bag check out their album ‘Millbrook’ HERE.

The temperature in the Albert is intense and by the start of tonight’s third act I’m almost soaked through with sweat and it’s only going to get worse. 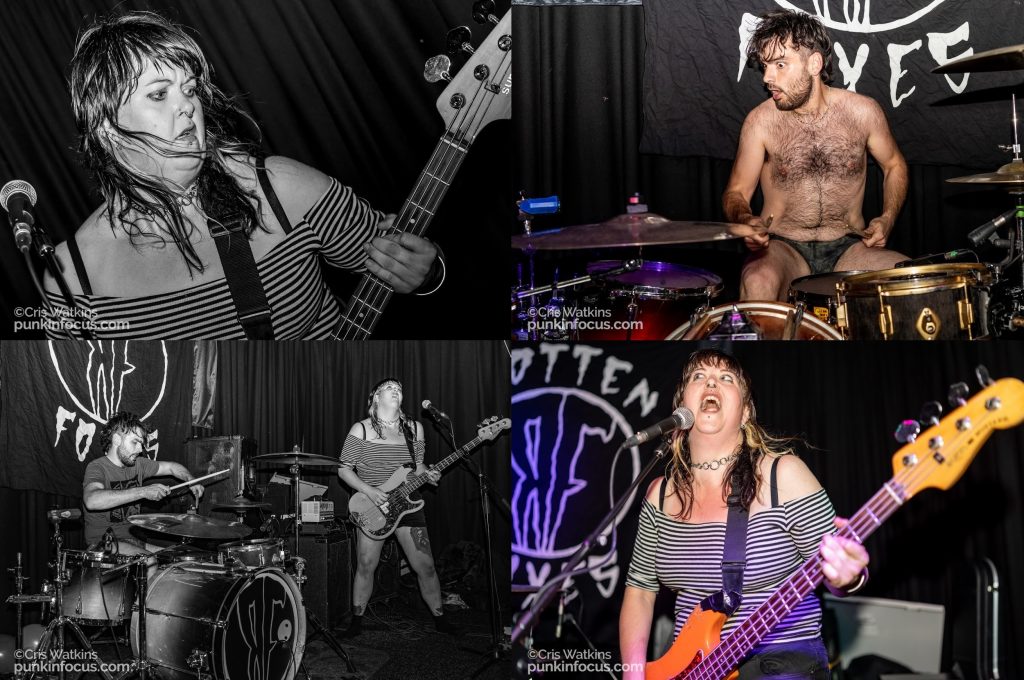 Human Leather are a 2 piece combining bass and drums with some amazing powerful guttural vocals from Amee (and a lot of gurning) and some of the finest drumming I’ve witnessed in some time from Tom. They are loud, fast and heavy and come across like the bastard offspring of Extreme Noise Terror. If you like your punk rock to knock you sideways, you’re gonna love them! 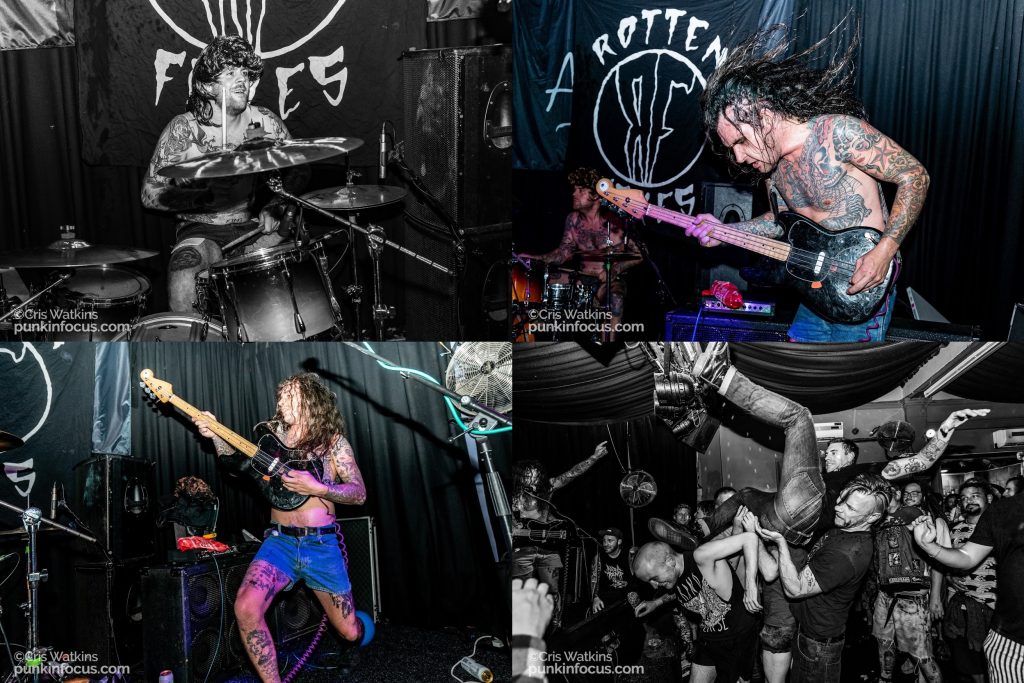 After a short trip outside to get some needed fresh air and a gallon of water we’re back for tonight’s next band ‘Skinny Milk‘ and what an absolute treat they are to witness. They are the third 2 piece and again they’re a combination of drums and bass and are best described as garage punk with a psychedelic funk twist. The set is pure electric and this jam-packed sweaty horde are loving it! They get joined later on by Danny and Jimi from the Foxes for another cover that sees plenty of crowd surfing break out with arms and legs flying in every direction!

Now it’s time for everybody’s favourite Brighton punks to take over the show but before they do we get a bizarre ensemble hit a darkened stage dressed mainly in black bin liners, it wasn’t clear to me what the message was as they tried their best to stay silent for the duration they were there but turns out they were members from the previous bands and a few others, bewildering. 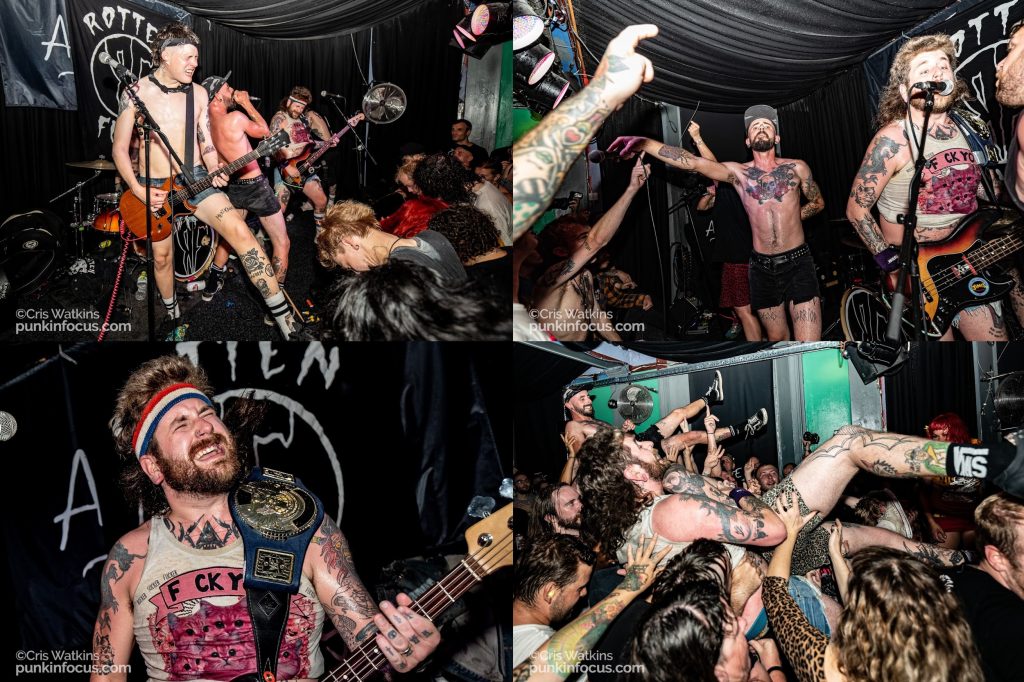 Finally, the Rotten Foxes join them to the strains of the Scorpions and we’re all set to go. I’ve only ever got to see these guys twice before, last month at the Pipeline and when they supported ‘Maid Of Ace‘ at this venue in July, so I’m a real newcomer to the band and so shocked that I missed so many gigs I know I would have loved, and talking of love there’s a lot of it in the air tonight for the boys.

Rotten Foxes kick-off with ‘Crafty F*ckers’, ‘Jimi’, ‘Pints’ and a blistering ‘Make Me Pretty’ then go on to deliver an unparalleled set of classic hard, fast punk that just rocks the Albert to its foundations! With every number the pit gets crazier and crazier, the band hotter and hotter, it’s an absolute oven in here and Rotten Foxes are just turning up the heat.

Later, Rhys joins the crowd and is held aloft on a sea of hands while also trying to steer them to the bar only being held back by his mike lead and not the willingness of the crowd. It’s a bruising, riotous and furious show with every one of the 17 tracks played tonight lapped up by this punk loving mob, especially crowd favourite ‘Danny Dyer’ one of the night’s many highlights that fly by way to fast.

Sadly things have to come to an end and unfortunately not just for this evening, as the guys hang up their well-worn shorts for good tonight… or do they? I guess only time will tell. After a final blast through ‘Mullet’ Rhys, Danny and Jimi join the crowd for one last surf before taking to the stage along with a refreshed Macdaddy one final time to the sad sounds of Ozzy Osbournes ‘Changes’, you can feel the emotion ripping through the crowd, a mixture of sadness and pure unadulterated joy.

Rotten Foxes bow out on a high tonight and deliver a night to remember for less than the cost of a pint! They also showcased how the DIY punk scene locally is seriously on fire, unfortunately, a few flames go out tonight but let’s just see what emerges from the ashes! 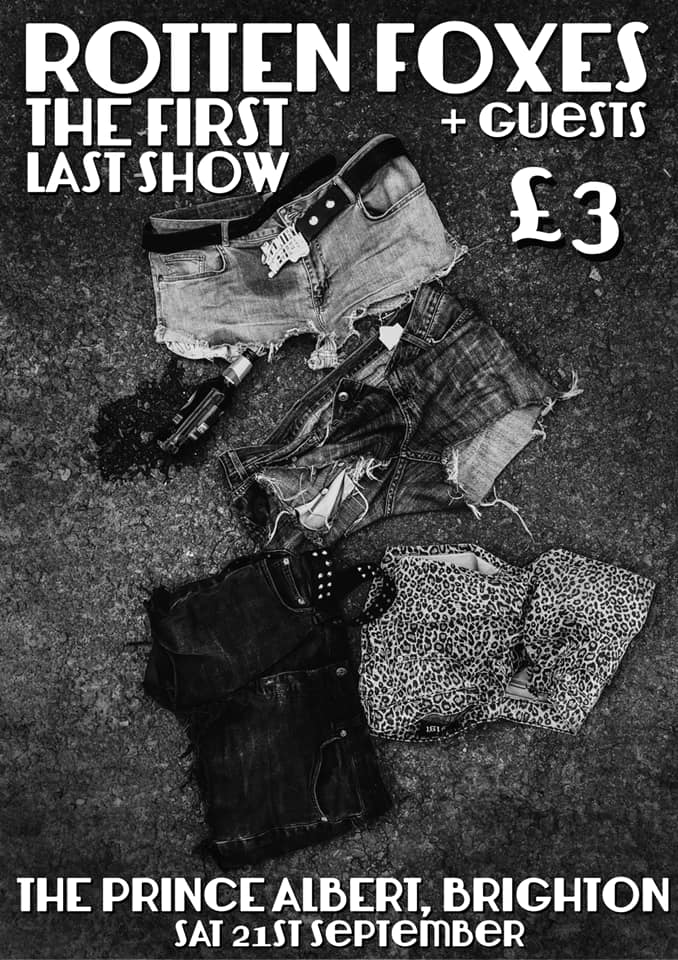