Helium pop has arrived in Brighton 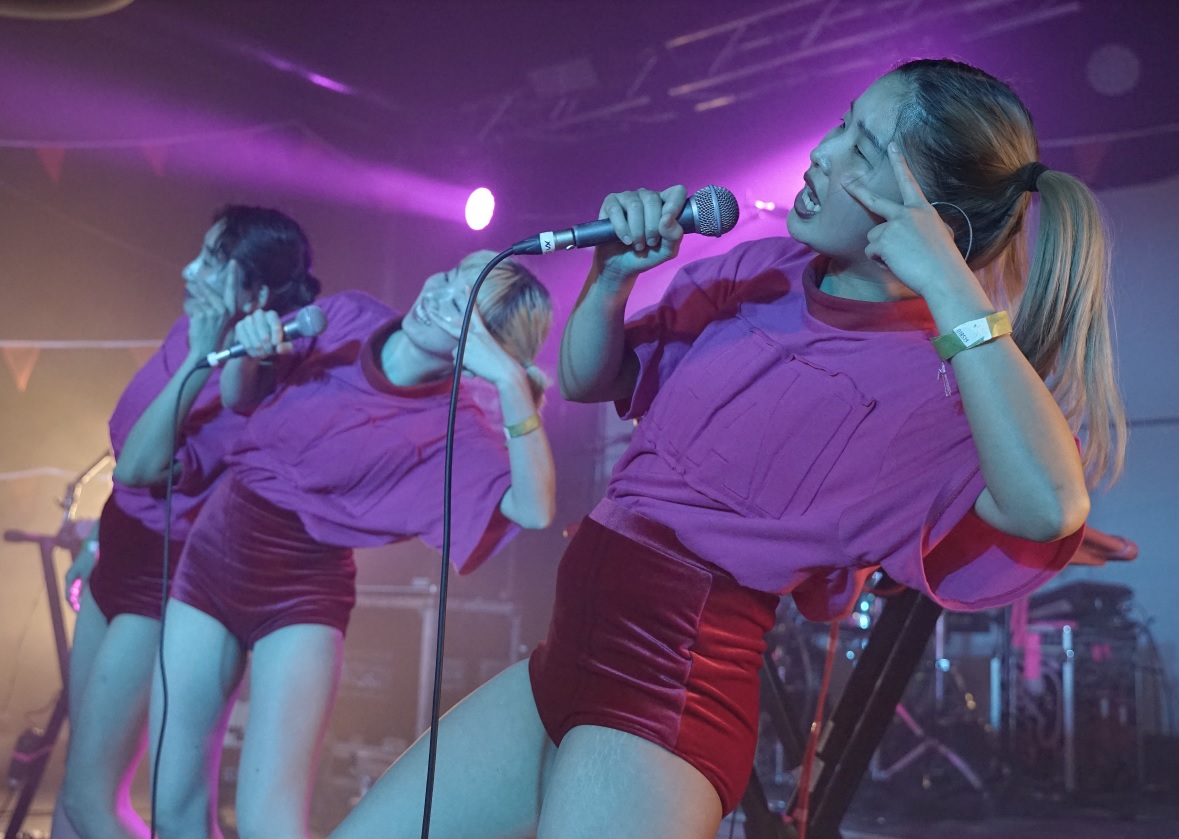 With the onslaught of depressing weather, Brexit and a general malaise across the apathy filled country, there’s only one thing for it tonight and that’s to cheer oneself up and head on down to the ‘new look Haunt’ aka CHALK, in order to throw some dance moves and wash those troubles away!

This was my first chance to see for myself what they have done with The Haunt. The entrance in Pool Valley is now a few feet along to the right from previously and is smaller. You walk up the steps and a few more and you are greeted with the stage in the distance, which does feel like The Haunt. The new soundsystem is crisp and clear which for a gig venue is essential really, and the huge speakers are hung across the extra wide main stage. They have another smaller stage by the side of the long bar, which is not being utilised at the moment. Apparently the whole bar can move and swing out and the cloakroom area opposite can be reabsorbed into the main standing area. The walls are all black like a chalkboard hence the name CHALK. There were a few scribblings, but I couldn’t see any chalk lying around in order to add my bit. My first impressions are favourable, especially the actual stage surface and all of the equipment is new. I have the distinct feeling that they have now become in direct competition with another well known venue in town. I have already noted that a few acts that have previously appeared at that certain competitor, have now re-booked their concerts at CHALK instead!

On the bill at CHALK tonight is quite possibly a name in the bright world of pink-pop that you might not be aware of yet, namely CHAI. 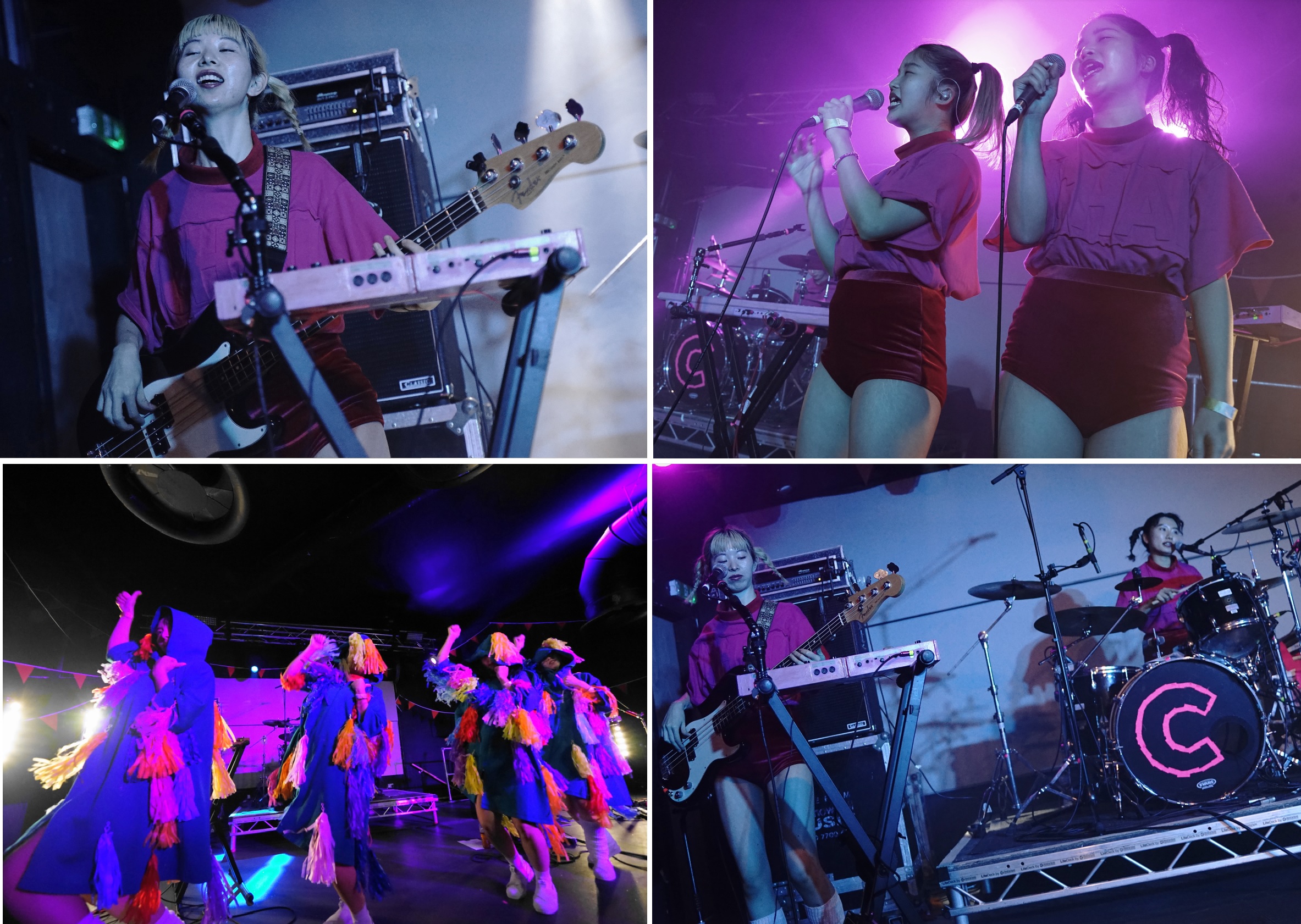 I was first aware of CHAI (which is always stylized in capitals, like several of their songs) when they were shown on The Great Escape artists list, and so I made a note to see them. I seem to vaguely recall that they were performing a couple of times in Brighton, with one being at The Hanut and the other on the beach. I was aiming for their beach event, but alas was only arriving on site as their final number was playing. It sounded great from the other side of the Volks Railway track – boo hoo hoo.

This evening, things were rectified as I caught the whole of their eclectic but uplifting 55 minute set. You may get to see some of this at some stage as there was a chap with the band who was filming it, so fingers crossed.

The band, who were kitted out in matching pink tops and red school gym wear pants, hail from Nagoya in Japan and consist of Kana (on guitar and vocals), her twin sister Mana (on keyboards and vocals), and their close friends Yuki (on bass and chorus) and Yuna (on drums and chorus). This is a quartet who sound as though they live off Haribo and the blue Smarties, but they certainly have tons of energy and are simply bursting at the seems in order to convey their message.

Imagine a world that is filled to the brim with throwaway pink plastic and vivid colours, where everyone is obsessed with everything that is cute and innocent and adores ‘Hello Kitty’ and ‘Pikachu’ and talks in a high-pitched voice like little girls excited on first seeing tiny pink kittens, well certain segments of the Japanese society go in for this sort of thing. They even have a word for it, which is ‘Kawaii’, which goes along the lines of meaning ‘cute’, ‘adorable’ and ‘lovable’. The Collins English Dictionary in the UK in 2014 entered “kawaii” into their then latest edition, defining as a “Japanese artistic and cultural style that emphasizes the quality of cuteness, using bright colours and characters with a childlike appearance”. Well, ladies and gentlemen, boys and girls, cats and dogs, welcome to the pink coloured hyper-animated world of CHAI.

Over the past handful of years, CHAI have been gaining momentum in their homeland, in the USA and also in Europe, with their DIY spirited indie-pop sound and have been signed to ‘label of the moment’ Heavenly Recordings, where they released their 6-track EP/mini-album (not surprisingly) called ‘Pink’ last October and followed it up this March with their 10-track album, called ‘Punk’. Which for the record isn’t punk, listen to ‘Curly Adventure’ and ‘I’m Me’ for a taster.

Tonight was one of only four UK gigs on this tour, so we were honoured to be able to listen to their high pitched happy performance. Of course there’s a possibility that they will only came back to Brighton again in order to eat at their favourite restaurant Nando’s! They informed us that they always go there when in Brighton and enjoy the garlic bread and other dishes – hey heady rock’n’roll lifestyle eh?

They certainly know how to get the crowd going by raising their arms in the air and have big broad smiles all the time just like fellow Japanese band Shonen Knife do. At certain periods they reminded me of Milly Toomey aka GIRLI, but there’s four of them!

They whizzed through their set at times in super quick time and in others they took turns to engage with the punters, which was rather endearing. Thankfully I have a setlist to hand, so I had some idea of what was going on, if not some lost in translation. Tonight, bopping was the order of the day and the heavy beat of ‘ファッショニスタ’ (‘Fashionista’) certainly fitted the bill. ‘N.E.O.’ was rather funky too, with its bass slapping beat. At one stage we even had a rendition in parts of an amalgam of the intro of David Bowie’s ‘Modern Love’ morphing into Culture Club’s ‘Karma Chameleon’ – ahhh the wonderful wacky world of CHAI eh?

The tracks that really did it for me on the night were ‘カーリー・アドベンチャ’(‘Curly Adventure’) as the melody and beat sound like fellow Japanese band the fin. (note the full stop in their name); ‘フューチャ’(‘Future’) which is the track I heard across the Volks Railway line and have enjoyed ever since; and best song goes to ‘This Is CHAI’ for which the girls donned costumes and did a dance routine to a decent chugging beat.

At the end of the set they promised that they will return to Brighton to play live again, and I for one believe them. I just need to keep on phoning Nando’s to see if they have had any bookings for four people under the name of CHAI. 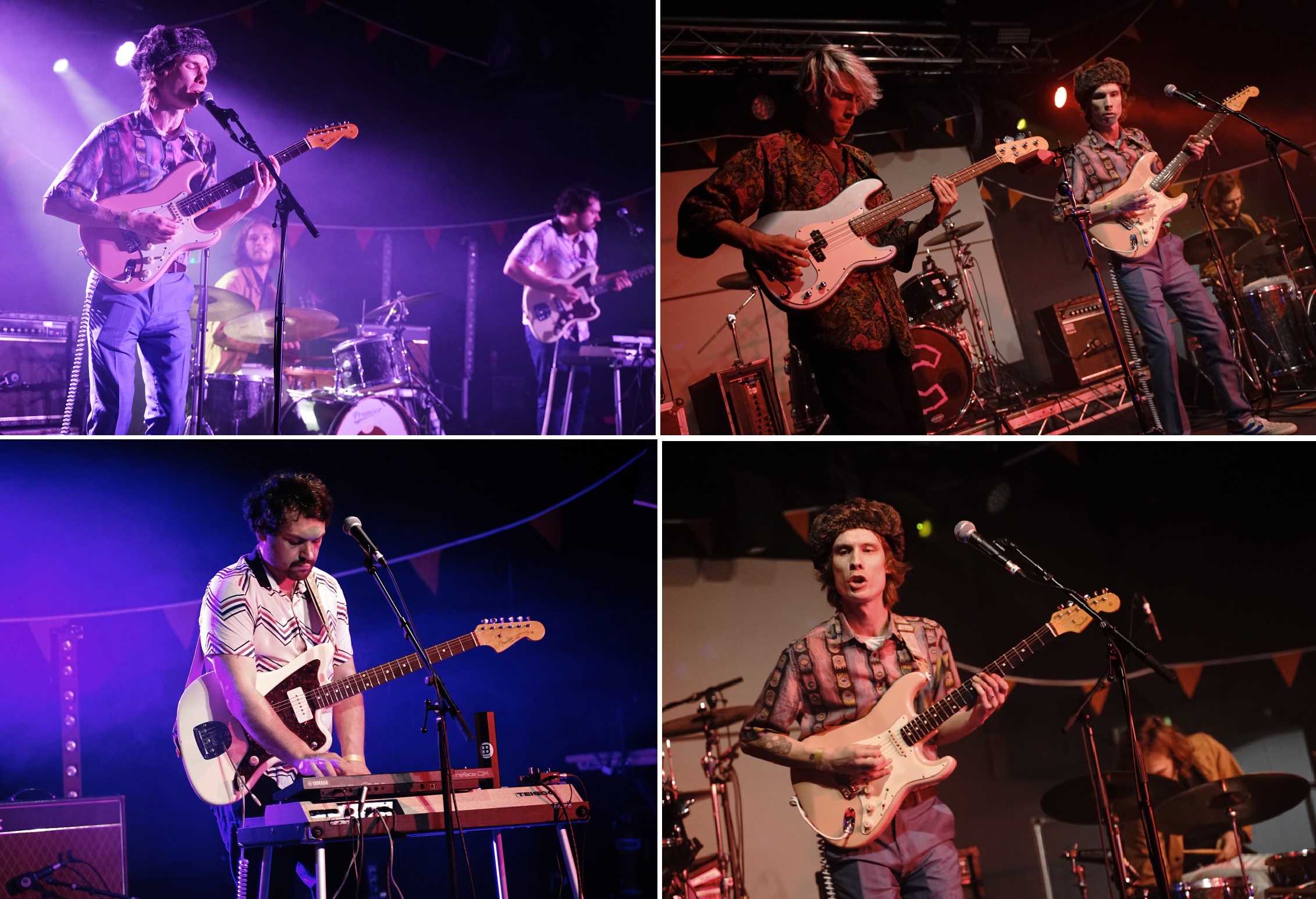 Support on the night was a totally different kettle of fish and came in the form of local Funk Pop/World Beat Party Priming quartet Galangas, who suggest they take the anxious lyrical stylings and jagged funk groove of the Talking Heads, the rhythmic influence of Fela Kuti and then lean into the synth sounds of early Prince and you’re getting close to Galangas sound. I like Talking Heads and although the band went down rather well with the polite punters, they certainly were not for me. 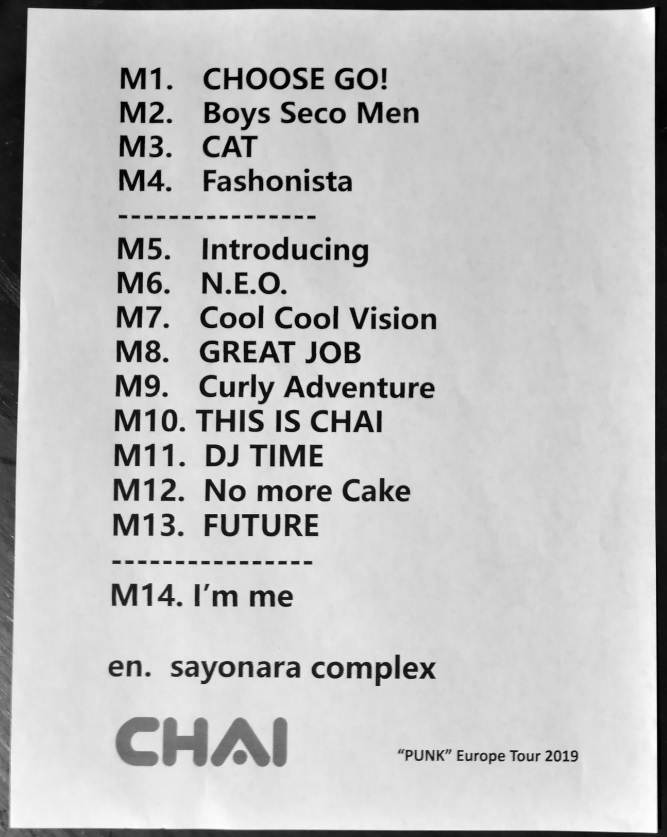 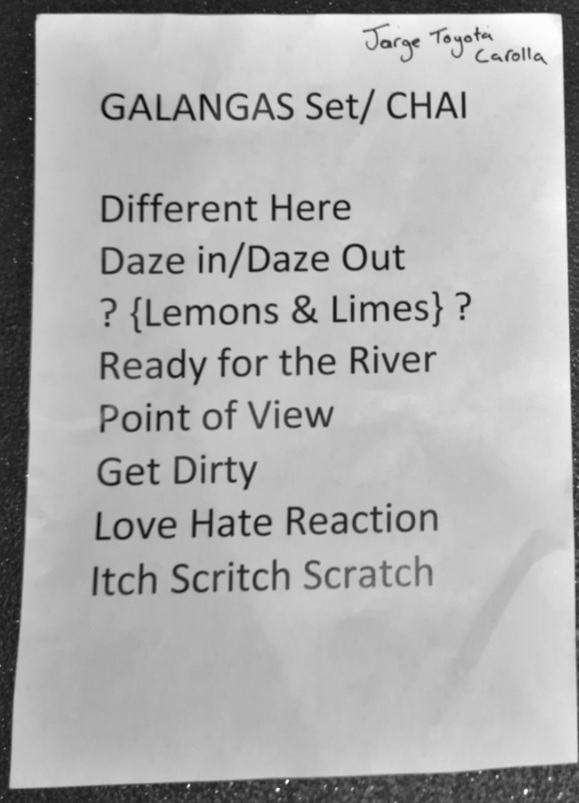 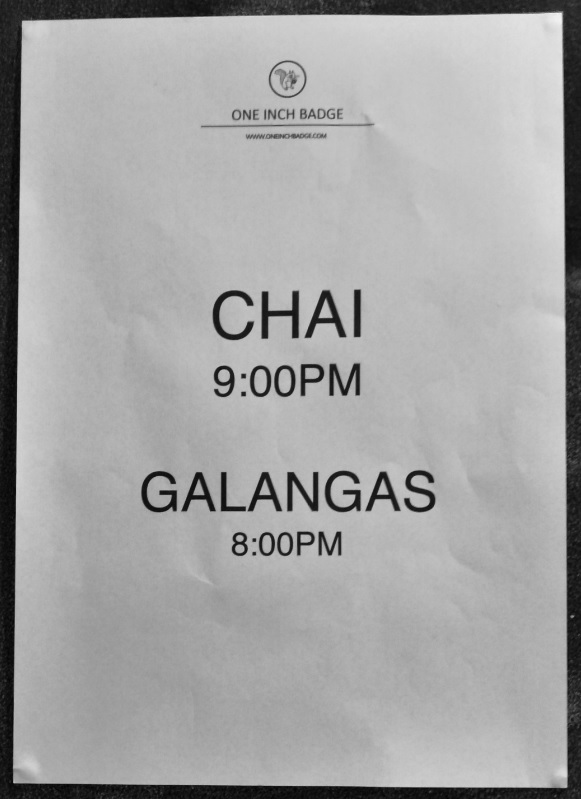 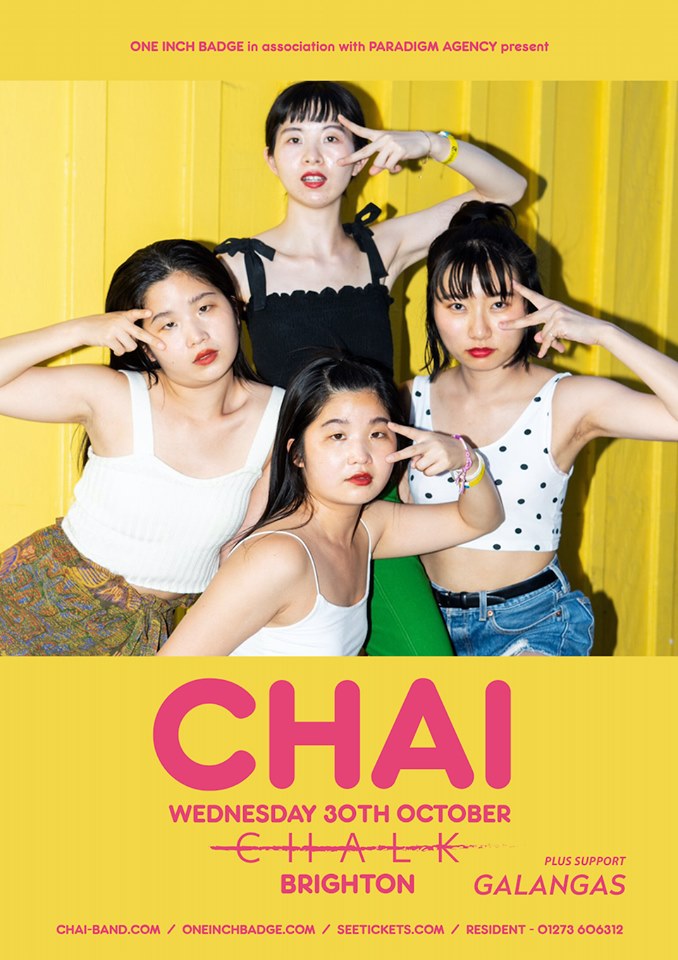