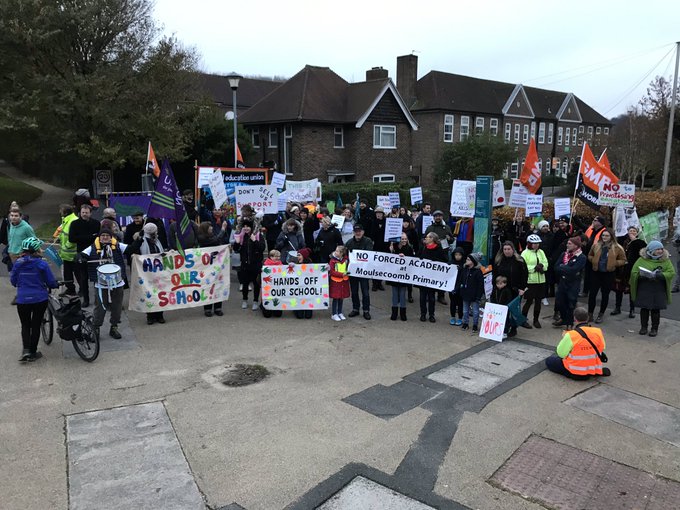 The picket line at Moulsecoomb this morning. Picture from the NEU

Newly released emails show academy trust New Horizons raised questions about how much Moulsecoomb Primary School is already improving and said the existing head is moving it in the right direction.

The trust put itself forward as a potential sponsor for Moulsecoomb Primary School within days of it being told it must convert – but wasn’t put in the running until at least three others were ruled out.

The emails have been released in response to a freedom of information made by parent campaigner Ulrike Hoffman, part of the Hands Off Moulsecoomb campaign group.

The government issued an academy order for the primary school on 4 June, following an inadequate Ofsted rating the previous month.

On 14 June, New Horizons director of education Lee Murley emailed the Regional Schools Commissioner (RSC) to express an interest in taking over the school – but the RSC only replied in earnest at the end of July, after its original first choice pulled out.

They also show that New Horizons thought the existing head teacher was “moving the school in the right direction” and had some concerns over the school’s improved results.

And there was also discussion about “optics” – i.e. any issues which could be picked up by the “anti-academy press”. The emails don’t specify any issues, but these could have included New Horizons having to hand over another school it converted after more than half the staff quit in 2017.

The trust has also so far failed to respond to requests from Brighton and Hove News and the city council to see the minutes of its trustees meetings, which its articles of association say must be publicly available.

After reading the email exchanges, Ulrike Hoffman said: “If the school is moving in the right direction, doesn’t that mean that Ofsted should come back and reinspect the school, and the academy order should be revoked?

“The emails say we are at 47% capacity – but about 50-60 people have said that if the school does become an academy, they will move their children out.”

The RSC formally replied to New Horizons to kick off sponsorship discussions on 1 August, after it had talked to five other academy trusts.

In his email of 1 August, Lee Murley says: “I note from the Ofsted Inspection that the HT [headteacher] seems to be moving the school in the right direction – an update on where the DfE stand on this would be helpful.

“Can I also ask in the broadest of terms what their financial situation is like and if they have any PFI in place?”

The following day, he asks for more information about the school’s greatly improved KS2 Results.

On 16 August, Lee Murley questions what is meant by “optics” in a expression of interest document the trust has been asked to complete.

The RSC’s office replies: “It is just about whether there are any issues that you are aware of that would be picked up by the anti-academy press, and if so, how would you propose to deal with them.”

The email exchanges between the RSC office and the potential trusts also mention a strong or clear “moral purpose” in converting the school more than once – but redactions mean it’s not clear what this purpose is.

One of the first trusts to be contacted was Schoolsworks, based in Littlehampton, on 5 June – the day after the academy order was issued. Subsequent emails refer to attempts to set up a phonecall, and little else.

The emails also include some from Tim McCarthy from Aurora Academies, which runs City Academy Whitehawk, expressing an interest in “Molsecombe” school.

However, in the early stages Aurora was up against the University of Brighton Academy Trust, and the RSC decided to proceed with the latter – before the university trust pulled out.

Emails from John Smith from the University of Brighton Academies Trust show the offer was turned down on July 23 after its trustees were consulted – although the reason why is redacted.

The email reads: “I have contacted trustees. Our trustees hold a strong moral position that we should help schools in difficulty.

“Therefore, I am sorry that we are unable to proceed.”

Three days later, Mr Smith emailed the RSC office a link to our story saying that the University of Brighton had ruled itself out and inviting him to get in contact.

The RSC asked Step Academy if they would be interested in running it on 23 July, about an hour after the University of Brighton turned the offer down.

Step’s chief executive Mark Ducker replied within minutes, but everything he said has been redacted, other than “Thank you for your email” and “Best wishes.”

However, in a subsequent email, he says “sponsoring Moulsecoombe [sic] would require moving into a new local authority. Notwithstanding these potential challenges, there is clearly a strong moral purpose so I would be happy to schedule a call.”

The Pioneer Academy was then approached on 30 July. Its CEO Lee Mason-Ellis replied the following day, after a phonecall with an email with the subject line “TPA Capacity for Further Growth”.

He said: “It is a school that appears to have huge potential and one we at the TPA [The Pioneer Academy] feel we could partner and ensure significantly better outcomes for its children, in the shortest possible time.

“Please find attached our Capacity and Growth summary, as you requested, and our new Strategic Plan for 2019-22”

Durrington Multi Academy Trust, which took over The Laurels from New Horizons, was also approached on 30 July.

In a part-redacted subsequent email to its CEO Sue Marooney, the Regional Schools Commissioner office says: “In 2018, the school was [REDACTED] in Brighton & Hove, with the smallest percentage of pupils (13%) achieving the expected standard in Reading, Writing and Maths at Key Stage 2 in the region, [REDACTED] so, there is a clear moral purpose here.

“This is because of a change in demographics in the area a lot of the local properties being turned into student flats.”

A seventh potential trust, GLF Schools, is approached on 14 August, a eighth, Swale Academies Trust, puts itself forward on 26 August and a ninth, Woodland Trust, put itself forward in September.

Last week, school staff walked out in protest at the academisation, which is also opposed by the city council.

A report is due to go before councillors about the suitability of New Horizons as a potential sponsor.

However, the city council has no influence over the decision, over which the RSC has the final say.

New Horizons was approached for comment but had not responded at the time of publication.