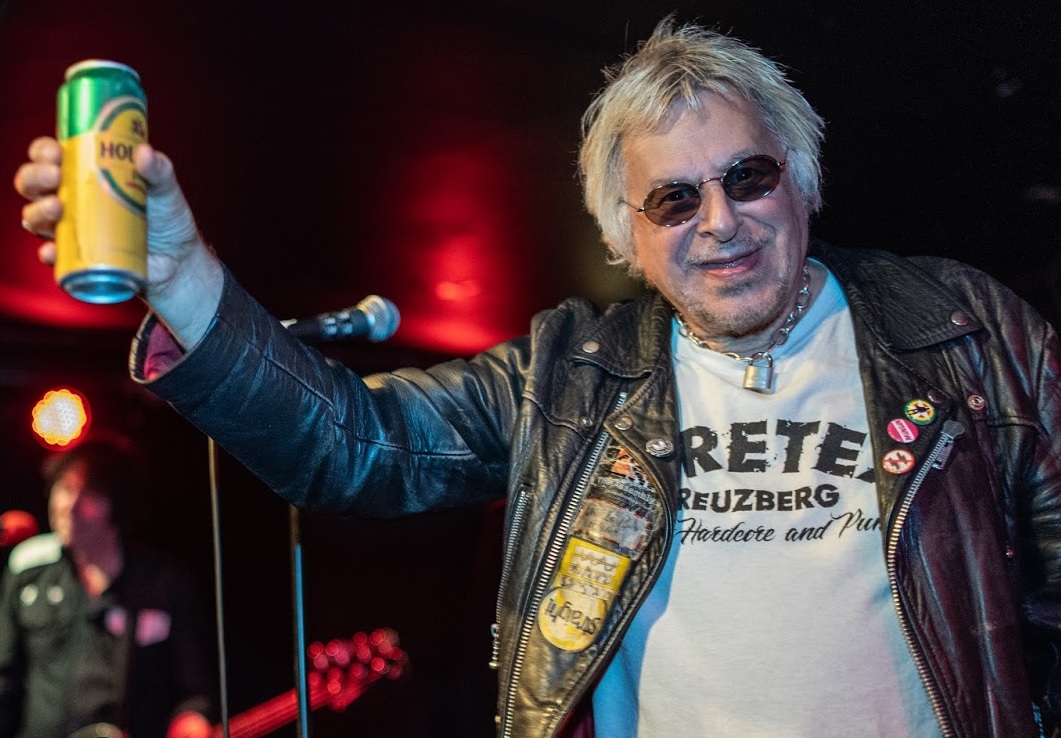 Tonight we made our way over to Lewes for the UK Subs Winter tour and I have to say that I have been looking forward to this gig since it was announced. UK Subs, Peter And The Test Tube Babies and Nuffin’ – bring it on!

This year has seen the re-release of a number of UK Subs albums and special editions, but tonight we were all there to celebrate the very first UK Subs album ‘Another Kind Of Blues’. This album was originally released in November 1979 and for me personally was life changing in my approach to life and the music.

I did review the gig at the Hope and Ruin earlier this year (read it HERE) and mentioned that I have played this album for the past 40 years from the day of its release, since I was 15 years old. I can still remember the first time I played it and how much I loved the sound. I first saw the UK Subs perform at the ‘Buccaneer’, which is now known as ‘Patterns’ in either 1978 or 79, just before they became really popular and started playing much bigger venues. This would have been around the time of single releases such as ‘Stranglehold’ and ‘Tomorrows Girls’. I can’t remember how many times I have seen them over the years, but whichever lineup I have seen they have never disappointed.

The original lineup in 1979 was Charlie Harper on vocals, the only original member, Paul Slack (bass and vocals), Nicky Garrett (lead guitar) and Pete Davies (drums). The bands sound I think is best described as energetic street punk, driven by the songwriting and vocals of Charlie Harper, who incidentally turned 75 in May this year.

Upon arrival at The Con Club Lewes I was amazed at the amount of people already in the venue and was greeted by a host of familiar faces. There was a real family atmosphere here and every time someone came in I recognised them. Jordan Mooney, a real punk icon, was also in attendance. I guess the line up tonight was a real contributing factor as the venue was definitely the busiest I have ever seen it. 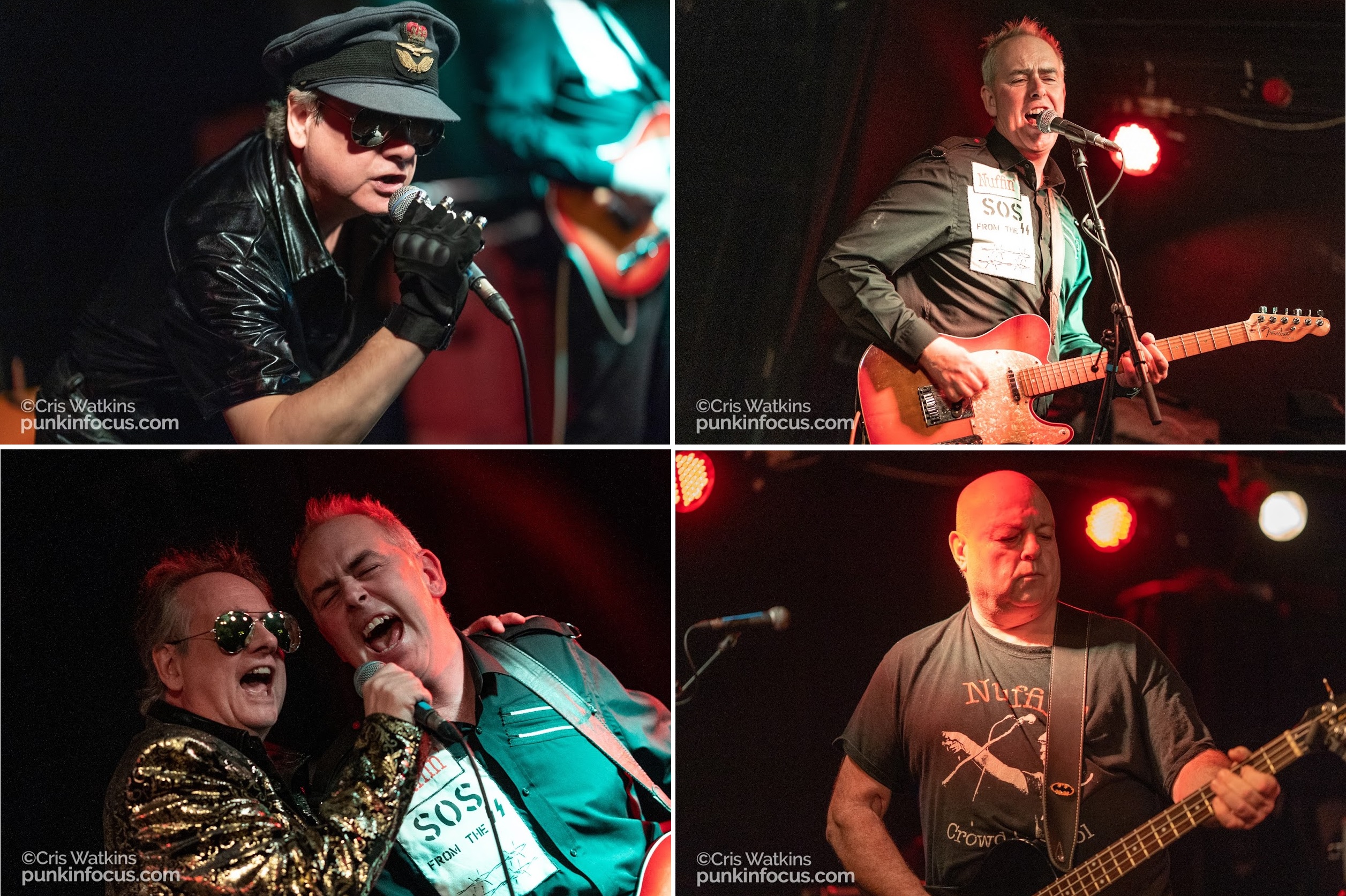 First up tonight were Nuffin’. One of the great things about the Con Club in Lewes is that you can relax and meet all the bands and I had a great time chatting to them all and finding out about the history. Brian Damage explained the history of the band. Nuffin’ formed in Caterham in ‘76 and their ‘77 Roxy Club gig featured on London Weekend Televisions’s documentary “1977: The Year of Punk”. Brian explained that the TV crew were searching for unsigned bands and as they were unsigned, thus they got featured in the programme. Nuffin’ continued to gig for the next year or so, and a 4-track demo was put down in 1979, which Brian until recently had in his loft, but they disbanded in 1980. Nuffin’ are one of the only original bands from 1976 to have all 4 original members, which they are all very proud of.

The band consists of Christopher Brown (vocals), Steve (‘Brian Damage’) Flynn (guitar/vocals), Paul Flynn (bass) and Neil Faulkner – who replaced Roger Bullen who went off to join Eater in 1976 when Eater first gained a recording contract – (drums/percussion/assorted guitars). They all reformed Nuffin’ in 2016 and their debut album ‘Crowd Control’ consists of a dozen originally penned tracks from 1975-79 and was finally released in 2018 after 41 years!

I first saw them live at the tail end of last year supporting 999 in Brighton and then again at the Sussex Hotel in Bexhill. They put on a great show and their history is quite amazing. Christopher Brown on vocals has enough charisma for 10 of us and is an absolutely brilliant frontman. The set kicked off with ‘Red Day Blues’ followed by ‘Out Of Action’. They have a real old school sound, but all the tunes are so catchy with brilliant delivery and showmanship.

Next up was ‘Rosalyn’. Then came ‘Mandy, Tuesday Wendy’ This is so catchy and you just couldn’t help singing along with the band. Chris put on a pair of boxing gloves for ‘Punk Enemy’, which was also really funny. I just love the fun of these guys. 41 years in the making and they have kept us waiting this long. I think they are awesome and have loved their performance each time I have seen them.

The highlight for me as always is ‘Crowd Control’, We were all given Police hats and helmets to wear for this number (Brian told me they lose so many of these that the album sales only just cover the cost). I love Christopher’s story telling although tonight some banter from the crowd may have cut some short. Great music and great smiles had by all. 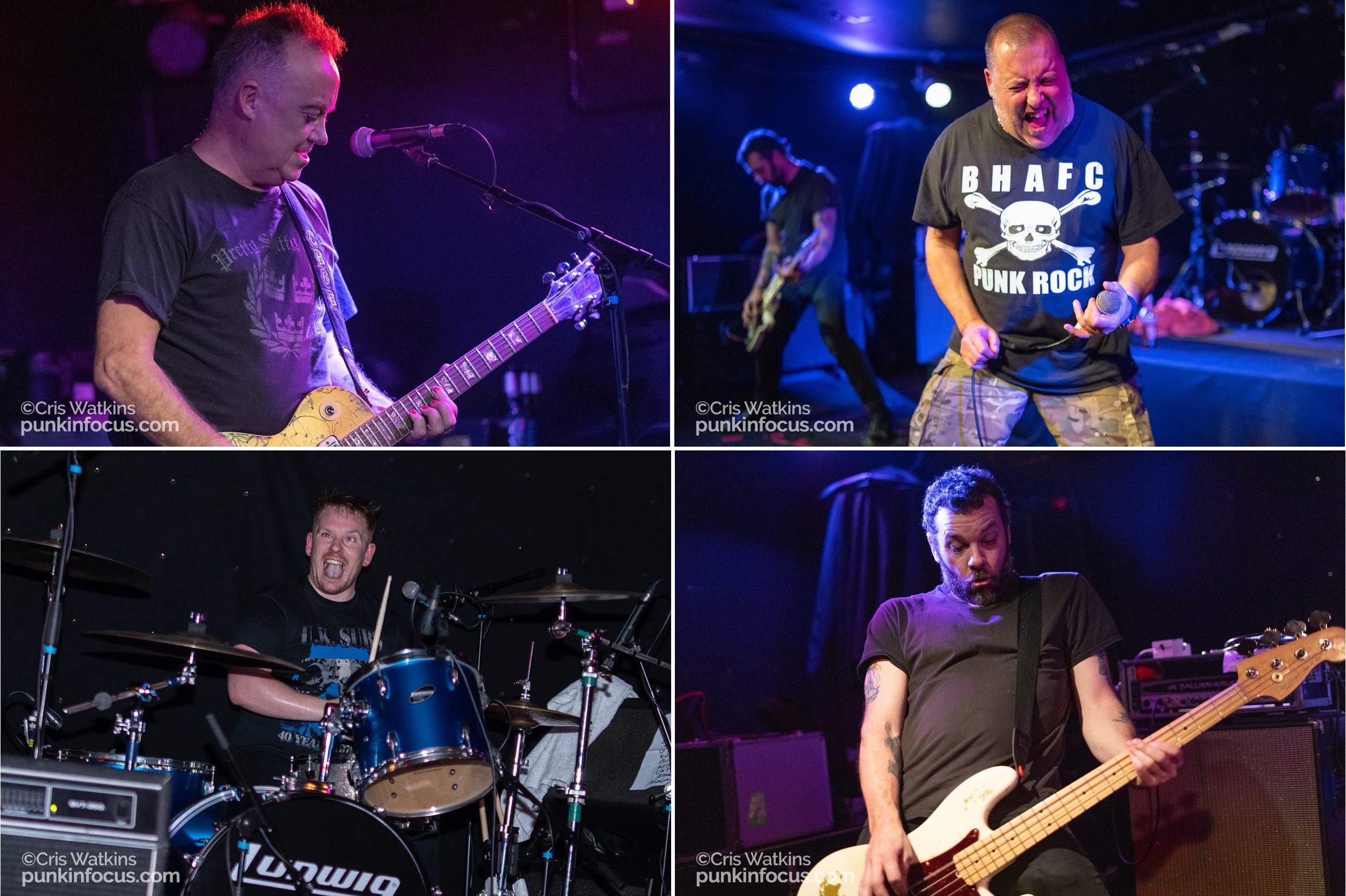 Next up were Peter And The Test Tube Babies. For those of you that have read my reviews of the band before, you will probably know they are one of my top 10 of all time. The band are: Peter Bywaters (vocals), Del Strangefish (guitar/backing vocals), Nick Abnett (bass), Sam Griffin Fuller (drums). The first time I ever saw them was in 1978 as I went to school with Del’s Brother ‘Walnut’ and we were all really into the ‘Punk Movement’ and the youth outlook of the time. They even played a gig at Tideway School in that year, but were unplugged after their 3rd or 4th song (no surprise there then). I noticed that a number of the ‘Peacehaven Wild Kids’ were in the crowd this evening and it was great to catch up with some of them.

On they came and kicked off with ‘Moped Lads’. This immediately kicked of a small mosh pit up the front and the crowd all knew the words. ‘Run Like Hell’ and then one of my personal favourites ‘Jinx’. This band are incredible live and the sound tonight was already top notch, this one giving me goosebumps, real “Loud Blaring Punk Rock”. as it should be heard. Next up ‘Never Made It’, which always brings on a smile. All the crowd around me were singing the words. The mosh pit up the front had grown over the past few numbers with people who were clearly ‘Test Tube Babies’ fans. ‘My Unlucky Day’ next followed by ‘In Yer Face’ and the crowd were loving it. I moved position as the energy in the mosh pit was frantic at the front.

Next ‘Every Second Counts’. Peter is such a brilliant frontman and has been right since the first time I ever saw them way back in 1978. He banters with the crowd and brings a real fun element to the bands performance. Del Strangefish, as always, brilliant on lead guitar tonight and drives the sound of the band. I was watching Sam (the rogue) on the drums tonight and boy can he play, he also has a real flair about how he delivers too. Nick’s bass was totally enthralling and combined their sound is gripping and it always lifts me. Next up ‘The Spirit Of Keith Moon’, this is my personal favourite. The set tonight ended with ‘Banned From The Pubs’ and ‘Blown Out’ and as always I am left with wanting more and that’s what we shall have with two dates at The Prince Albert in Brighton on the 27th and 28th of December. Grab your tickets HERE and HERE. 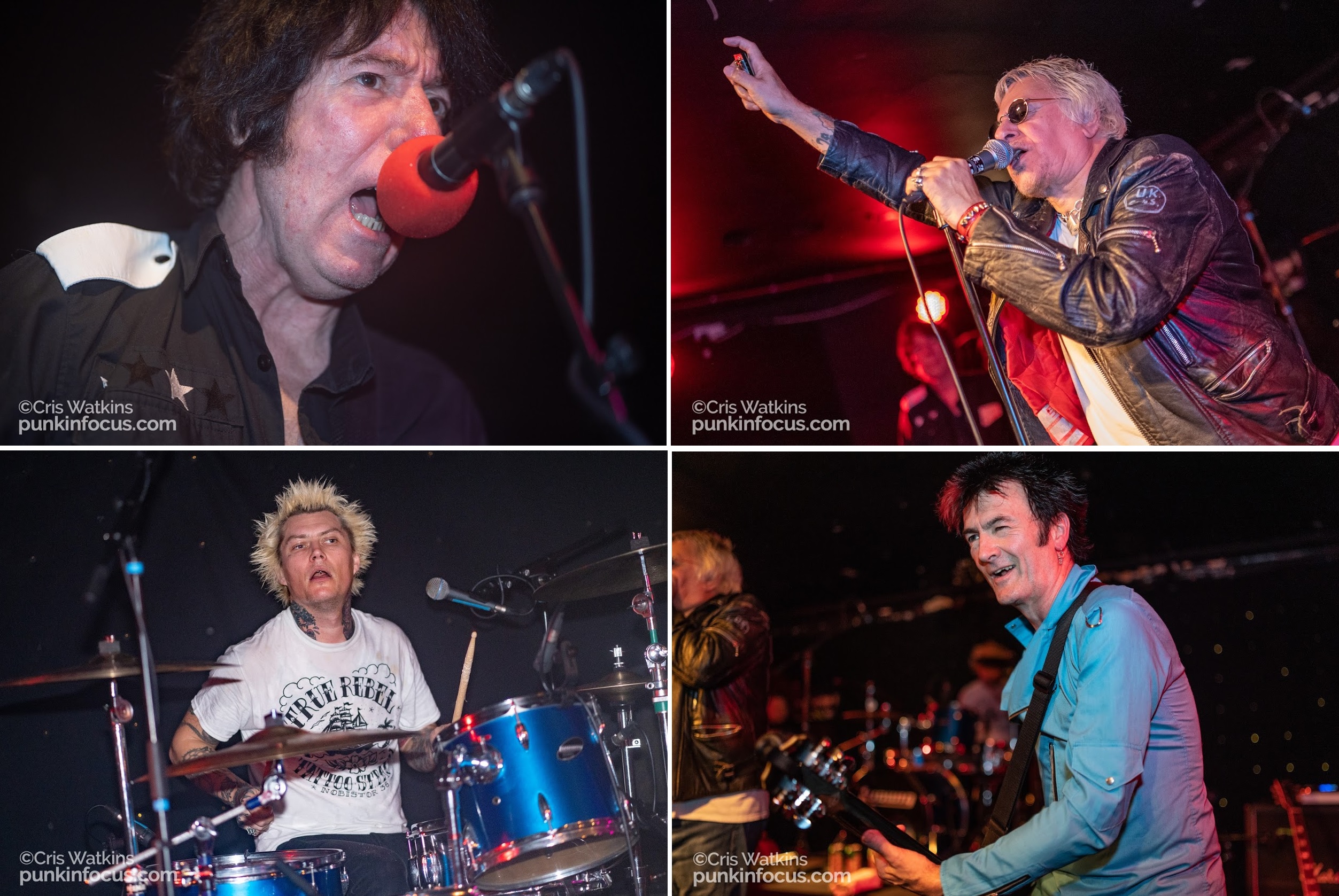 Next up and the moment many of the crowd here tonight had been waiting for. The UK Subs playing ‘Another Kind Of Blues’ in its entirety, in order. The Subs came on stage to great applause from the crowd. ‘C.I.D’ kicked off what was going to be an epic evening for every single Subs fan. The band are currently Charlie Harper (vocals), Alvin Gibbs (bass), Stephen Straughan (lead guitar) and Jamie Oliver on drums.

The sound of this combination is just amazing and it brings back memories of youth and the feelings from back in that time in a flash. I felt the goosebumps straight away. The crowd had already established a mosh up at the front, from the Test Tube Babies set and were straight on it. Next up ‘I Couldn’t Be You’. Everyone singing on the top of their voices. Next ‘I live In A Car’ and the tempo in the mosh grew massively. Charlie turned 75 this year and as ever was on fire tonight and so were Alvin, Steve and Jamie. ‘Tomorrows Girls’ then ‘Killer’ followed by ‘World War’ then onto one of the Subs anthems ‘Rockers’. I for one love this song and moshed singing “Born a rocker die a rocker”. Boy I was loving this. Next Up ‘I.O.D.’, That was side one, now for side two.

‘TV Blues’ next and I find it amazing that I can remember all the words, just like it was yesterday. Stephen Straughan has reworked the guitar brilliantly for this song and it sounded great. As at the Hope and Ruin, I knew that my three favourite Subs songs were coming up next. The first time I saw Charlie deliver these songs was at the ‘Buccaneer’, in around 1978, with the original line up and I was blown away. Since that moment I have followed this band all of my adult life. I can remember Charlie signing my T-shirt after a gig at the ‘Music Machine’ and chatting to the band, just like it was yesterday. So next ‘Blues’ and ‘Lady Esquire’ and all I can say Is wow. Everyone was loving this. Stephen Straughan is just amazing on that lead guitar and brings that original authentic Subs sound right back into this line up. Alvin is genius on the bass and along with Jamie provides the heart beat to the band. I rate Jamie as one of the best drummers around and such a character. Combined, these guys are the best outfit on the circuit.

Next ‘All I Wanna Know’, ‘Crash Course’, ‘Young Criminals’, ‘B.I.C’, ‘Disease’ and ‘Stranglehold’ complete the ‘Another Kind Of Blues’ setlist. The Subs then kicked off with ‘Emotional Blackmail’ from the album ‘Brand New Age’ album released in 1980. Obviously a crowd favourite and it hit the spot. Next up another top track ‘Limo Life’. Charlie then dedicated the next track ‘Riot’, to his Granddaughter Mia and then into a crowd favourite and Subs anthem ‘Warhead’, where Charlie was joined on vocals by punk princess Jordan Mooney. Charlie and Jordan had us all singing with them to this one and what a brilliant night. Next up and completing the set were ‘Endangered Species’, ‘Party In Paris’, ‘Fragile’, ‘You Don’t Belong’ and encore ‘New York State Police’.

Find out more about the UK Subs here www.uksubs.co.uk and here www.facebook.com/UKSubs 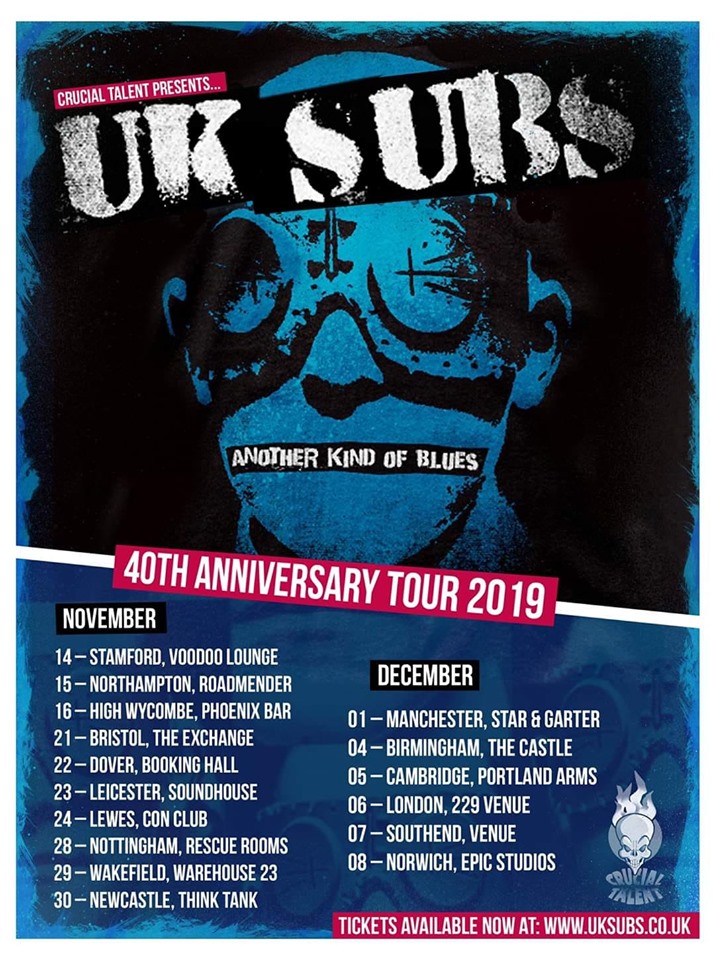