Lessons in the politics of education

Empowering young people, giving them schools capable of recognising and developing their unique talents and an economy that welcomes them whatever their pathway into our complex world of work … this is the mission that drove me to co-found two youth charities, get involved in improving local schools and ultimately brought me into politics.

Too often we get it wrong for young people and more often than not they don’t get a second chance.

At the comprehensive school I went to in the ’80s, I remember everything getting more and more sparse as time went on. Fewer books in the library, less equipment in the classroom and teachers forced to strike to draw attention to the challenges.

I left school in 1989, and when I returned age 25 to start over again I was taught in portacabins in the playground as the classrooms I’d previously been taught in were closed due to water coming through the ceiling when it rained. This was the state the 1980s Tory government allowed our education system to get into.

From 1997, every school in the UK was renovated or rebuilt. Did you know that in 1997 a third of schools still had outside toilets? None did by the time we left office.

Class sizes fell, teaching assistants were introduced so that classes were more productive and tailored to student abilities and every community got a SureStart so kids got the best start in life and were better prepared for school when the time came.

Outside of school, the charitable sector doubled in size and that included youth and community groups that ensured every kid had opportunities to be active and socially engaged.

I say all this because we always assume progress can’t be turned back, that a country like ours always moves forward. How wrong is that!

Since 2010 half our SureStart and Children’s Centres have gone, voluntary sector youth work funding has been cut by 70 per cent and per-pupil funding slashed. Capital funding to keep school buildings up to date and in good nick has all but disappeared.

Since becoming your MP, I have gone to war for young people. I never thought I’d ever see rain falling through a school roof again after my own experience but it happened again right here in Hove, so I stood up in the Commons and shamed the Secretary of State for Education until the money was delivered to get it sorted.

When David Cameron introduced legislation that would have scrapped every local authority school, I went on to the “bill committee” and fought tooth-and-nail until “universal academisation” was dropped.

And the second the funding cuts started to hit our local students I threw myself into the amazing local Save Our Schools campaign.

But more than fighting to stop the bad things happening, I’ve put my heart and soul into creating new and better experiences and opportunities for young people.

For my whole time as MP I’ve chaired the all-party group of MPs on further education and lifelong learning – holding government to account and helping design better policy. 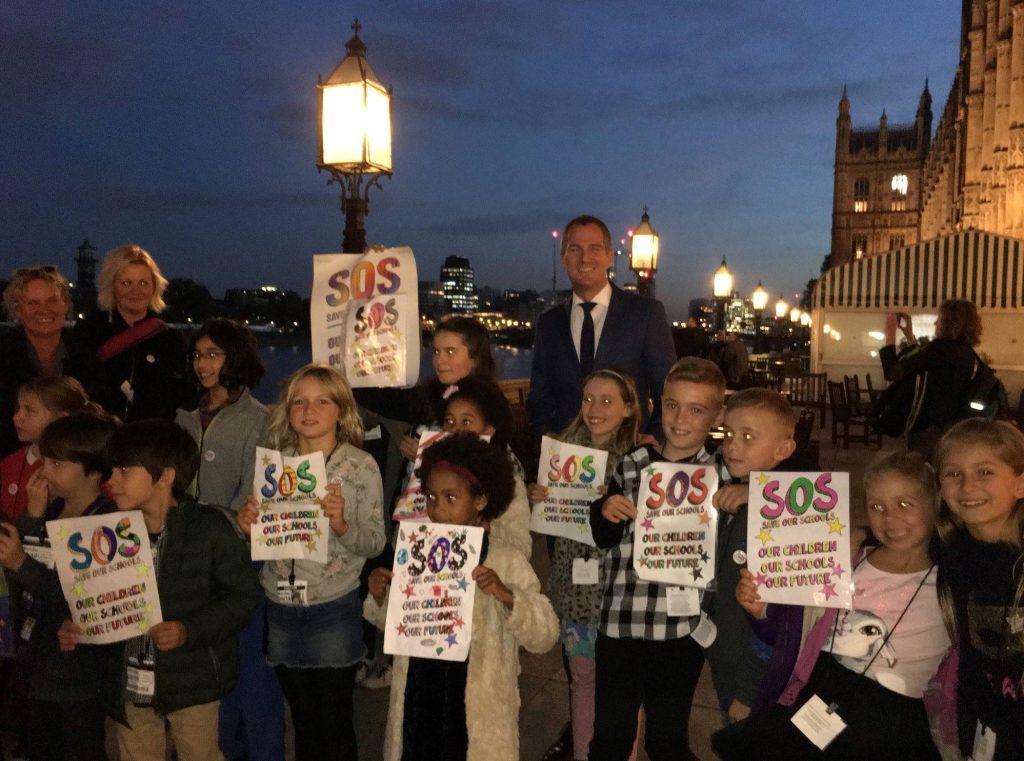 Locally I worked with council to implement the employer skills taskforce which created 1,000 apprenticeships in 1,000 days.

And to empower young people, last year I introduced legislation to the House to lower the voting age to 16 and include a polling station in any educational establishment with eligible voters (sadly the Tories filibustered and defeated the bill but I’ve not given up).

There has been a lot of fun along the way too. It’s been brilliant welcoming hundreds of local students to Parliament but there is a standout moment for me.

For one of the Save Our Schools campaigns a group of primary school kids came up to parliament for an event. When it finished a couple of the kids asked where the green benches were. I couldn’t believe that kids that young would know this sort of thing so it just felt wrong to send them home without showing them the Commons chamber. So off we trooped, several parents, teachers and an excited gaggle of youngsters.

There are two public galleries in the Commons – one behind soundproof glass and another that you can only go into with an MP which is actually inside the chamber itself.

The security guards by the chamber looked horrified when we arrived. They said the group was too big but after a long discussion they’d let them in to the soundproofed public gallery. I said no, I was taking them into the chamber.

Anyway, after a difficult exchange I got my way, explained the rules to the kids and in we marched to the House of Commons. 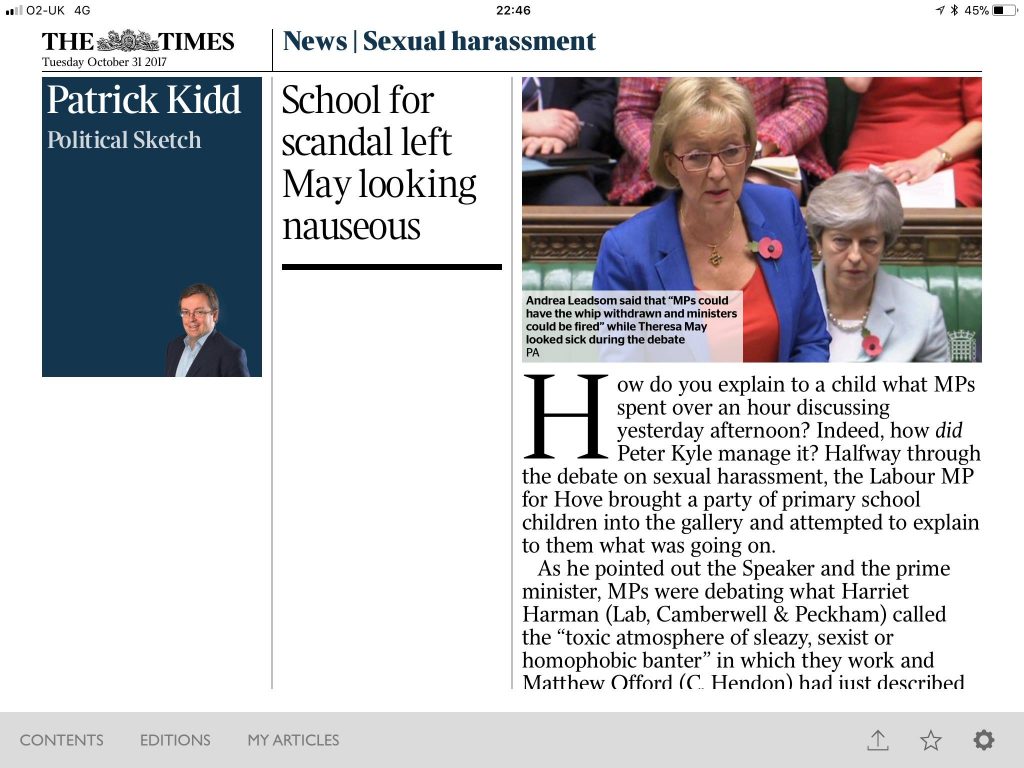 I’ve never been more proud of our youngsters. They sat there perfectly still and quiet, so much so that when the Speaker looked up and waved at them none of them waved back!

I moved among the group answering questions. They wanted to know what the Speaker did, what the mace was, why there was a man wearing a sword.

They knew the names of both Jeremy Corbyn and Theresa May. And the most amazing question for me was, “why do all the girls sit on one side?” She’d noticed that on the opposition benches there were far more women MPs than on the Tory side.

A journalist had noticed what was happening in the gallery and the next day The Times ran a story about it. The journalist wondered how such young kids would cope with the subject matter: the Commons was debating sexual harassment at the time of our visit.

It shows how little people assume youngsters know about life – there’s not much we adults can teach kids about how horrid and debilitating bullying can be.

Later that night a doorkeeper came over to me and said: “Mr Speaker would like a word.”

Speaker Bercow’s face lit up when I appeared at his side, “Peter, those kids were gorgeous. Are they from Hove? They are such a credit to your community, so well behaved. How did you smuggle them in here? Well done!” he said and patted me on the shoulder. 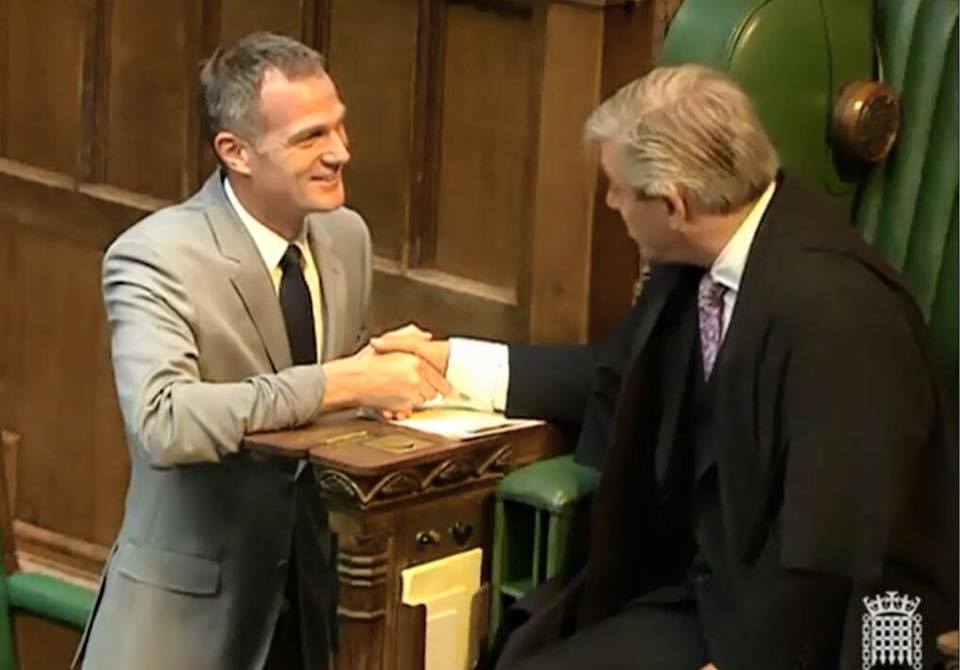 The Commons can appear unwelcoming and hostile at times but believe me it has a softer side also.

We often talk about respecting the wisdom of older people due to their experience and insight which can span back beyond our own.

As we’re approaching the election, I’m afraid I’m going to give you an example of what I mean. Earlier this year the Liberal Democrat candidate for Hove and Portslade retweeted a message from Greta Thunberg with the words: “No matter how good the intentions, there’s something about patronising children that just p****s me off.”

I take a different approach. As a politician I have always listened, engaged and aspired to show young people the same levels of respect that I would anyone else. Bearing in mind the challenges they are likely to inherit from our generation, it feels like the very least we can do.

Peter Kyle was elected Labour MP for Hove in 2015 and 2017 and is the party’s parliamentary candidate at the general election.