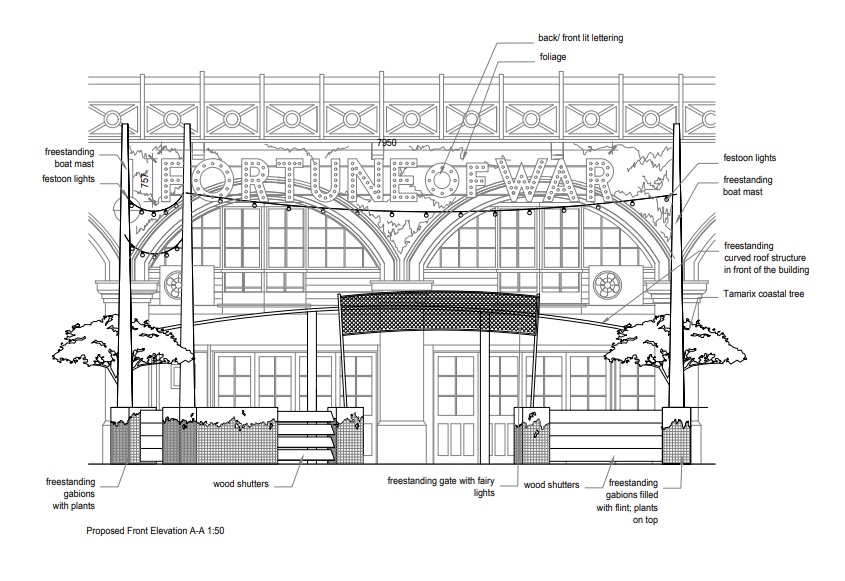 The Fortune of War is planning to celebrate freedom from building works by revamping its beer garden.

The seafront pub in Kings Arches will no doubt be looking forward to this summer, the first since 2013 when major building and roadworks have not been going on right next door.

This month, it has submitted plans to rework the seating in front of the pub with boat masts, festoon lights and pier style lettering.

The plans include a series of gabions – or large metal baskets – filled with flint and joined by timber cladding.

Eight boat masts would be installed in the gabions, and festoon lights strung between them.

A curved timber porch would hang near to the entrance and the gabions would be planted along the top, to include at least three pink tamarix trees. 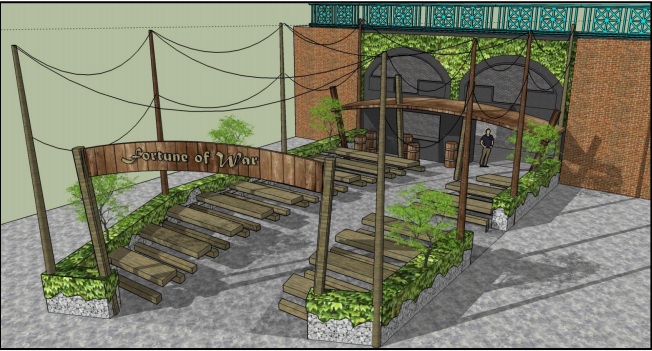 An early version of the patio plans

The application says: “The proposed advertisement requiring consent is a festoon bulb lit fascia sign. Each letter of the sign reading ‘Fortune of War’ would be a powder coated steel box with festoon bulbs within it, to provide illumination.

“It is acknowledged the sign would be larger than the existing fascia sign and protrude over the top of the arched windows of the building.

“The purposefully oversized, fairground style sign references the iconic Brighton Palace Pier illuminated sign at the nearby pier. It is therefore considered appropriate within this unique beachfront location.” 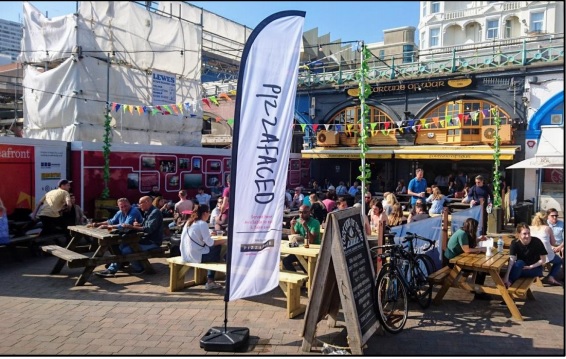 The Fortune of War’s current patio

It adds: “The public house site; through its history, long-standing name and material, has a distinctly maritime character.

“As noted above the interior of the building is boarded to appear as the hull of a ship whilst there is timber cladding to the façade.

“The timber proposed for the shutters and masts is sympathetic to the appearance and character of the building.

“Moreover, the flints filling the gabions will reflect the pebbles at Brighton beach and the planting will be appropriate for a coastal site.”

The pub was partially closed in April 2014 when its toilets collapsed, leaving a gaping hole in the A259 above.

Since then, work to first repair the collapse and strengthen the road above, and then to renovate the Shelter Hall next door has been ongoing.

The works are due to finish early this year, with the main hall set to become home to an upmarket food hall featuring up to ten independent local restaurants and street food vendors.

The Rotunda cafe above will become home to oyster bar Riddle & Finns, which this week applied for a licence for a 90-seat restaurant there.

Half the seats will be inside, and half outside, and the restaurant wants to serve a selection of still and sparkling wines, beers and spirits all accompanied by food, until 1am every day.