Charging points for electric cars seemed to be in good supply in Hove but the reality left a visitor from Berkshire feeling flat.

Anna Polizio-Broom found all the chargers that she tried to use were broken, non-existent or unavailable due to parked cars.

Before heading from Sunningdale to see friends in the Poets Corner area of Hove, she checked Brighton and Hove City Council’s website for details of charging points and found plenty of chargers on the maps linked from it.

Mrs Polizio-Broom said: “I never thought it would be that complicated by any stretch of the imagination.

“We have always charged the car at home and knew I was going to Brighton and Hove so I thought it would be simple to check the map and saw there were various options.

She tried the four charging points at Hove Station first and found out that all of the chargers there had been out of action for three months.

It was the first time that Mrs Polizio-Broom had tried to charge her eGolf away from home.

And her friends’ home, as with many homes in Brighton and Hove, did not have off-street parking.

During her search for a charging point, she found that some needed a specific swipe card and others were run off an app. She signed up with two of them, Electric Blue and Pod Point.

Mrs Polizio-Broom said: “I thought you turn up, make a payment and you’re good to go.

“The point we found at Richardson Avenue looked promising. I downloaded the app. It said it was charging.

“Then after 10 minutes I had a notification saying the charge had failed. This happened twice. 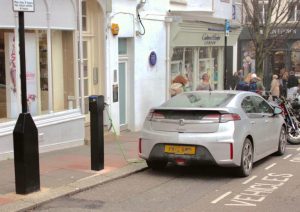 There were other charge points that she could not access because ordinary cars were parked there as the spaces were not dedicated to electric cars.

She said: “It’s important at the moment as the government has announced it’s going to ban ordinary cars when the infrastructure is just not ready for it.”

Mrs Polizio-Broom said that the whole situation was a “logistical nightmare” as she had to drive around using up charge.

It was made harder because of the lack of off-road parking in the central areas of Brighton and Hove.

After managing to get a small amount of power so that she could drive to another charging station, she reached it only to find nothing there.

In the end her father-in-law came out to her from Coulsdon and she managed to get enough charge to return home.

She added: “People may say ‘she should have planned her journey better’ but it should not be this difficult.

“I won’t be visiting any time soon.”

Mrs Politzio-Broom’s friend, Christina Motture, of Sackville Road, Hove, was deeply disappointed that her home city had let her friend down.

“In the future, I assumed it would be an option to have an electric car without having a driveway but I don’t see it as a possibility now..

“I live in a terrace house and cannot cable out on to the street. I know I can’t do it at home. Now I know I wouldn’t bother to do it elsewhere.

“I didn’t realise you could have a lamppost charger that any other car can park in front of. What’s the point of that?”

There is also a growing secondhand market for electric vehicles.

The council said that it would monitor closely the need for exclusive recharging bays.