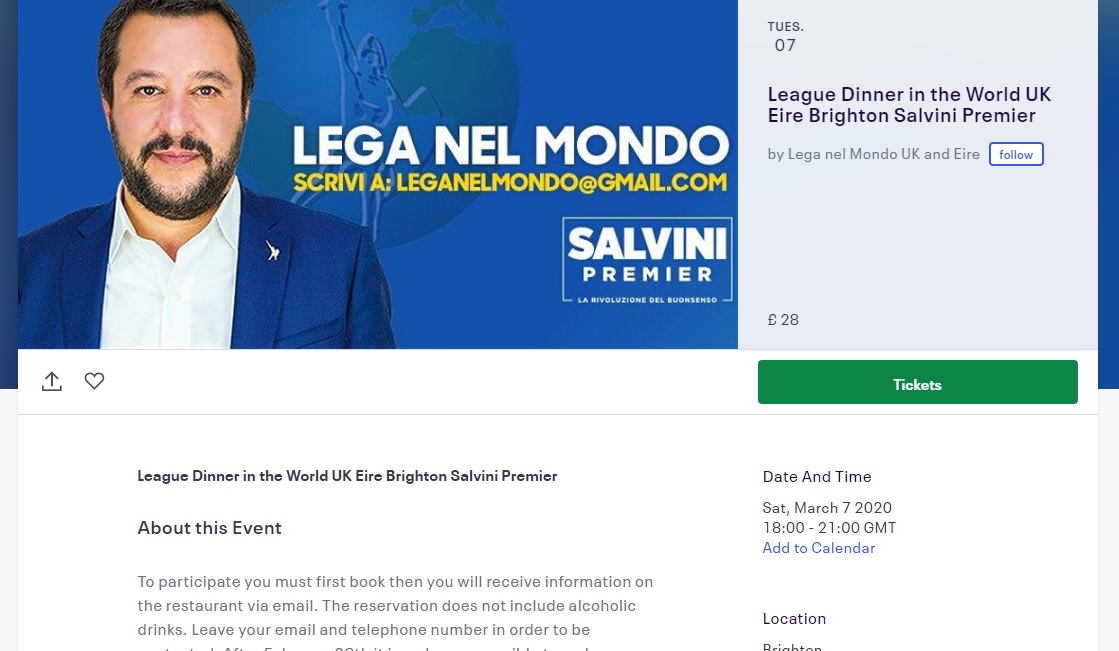 Anti-fascist campaigners say they will protest outside a dinner meeting of an extreme-right Italian party in Brighton tomorrow night.

La Lega, led by nationalist Matteo Salvini, is selling £28 tickets for a supporters’ dinner at an unnamed venue in or around Gloucester Street.

The only restaurant in the street, Isaac@, says the meeting is not happening there.

As well as the protest organised by Brighton Anti-fascists, the meeting has been condemned by the leaders of all three political parties on Brighton and Hove City Council.

Leader of the council Nancy Platts, Green party convenor Phélim Mac Cafferty and Conservative group leader Steve Bell issued a joint statement saying: “La Lega is not welcome in our city. We are a City of Sanctuary, we are proud of our diversity.

“Politics and beliefs based on hatred and division have no place here.

“We repeat again our commitment to unity. We stand together; strong in compassion with people from all cultures, ethnicities, religions and races.

“Division and hatred drives people into the ranks of those trying to recruit support to their bigoted beliefs. We will not let this happen.”

Andrew Beckett from Brighton Anti-fascists said: “Our city has a proud tradition of standing up against racists and fascists, from Jewish ex-servicemen chasing Mosley out of town in the 1940s, to the more recent community mobilisations that saw off the March for England.

“We’re seeing a fascist creep all over the world, La Lega are part of that, and we’re not going to let it happen in Brighton.”

Salvini has called for “a mass cleansing” of Italy of foreigners and Roma people “street by street, piazza by piazza, neighbourhood by neighbourhood”.

He is currently awaiting trial for kidnapping for refusing to allow 131 migrants to disembark from a coastguard ship.

As Italy’s interior minister he refused to allow search and rescue teams helping migrants in the Mediterranean to dock in any Italian ports which prompted an investigation by the United Nations.

Local Lega administrations in Italy have begun creating “immigrant-free” zones in the towns they run.

Tomorrow’s protest will begin at 5.30pm on the corner of Gloucester Street and Sydney Street.