Police are hunting for a Brighton couple who robbed a disabled man. 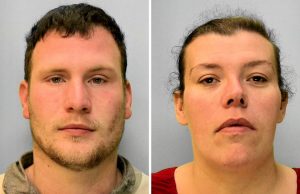 The pair were given a suspended prison sentence but – when the sentence was reviewed – a court ordered that the pair should be jailed.

They were supposed to hand themselves in by late Thursday but failed to do so, Sussex Police said.

The force said: “Two people who have had a two-year suspended prison sentence increased to three years’ immediate imprisonment are wanted after failing to hand themselves into police.

“Kirsty Norris, 32, and David Mercer, 25, both of Queensway, Brighton, were sentenced to two years’ imprisonment, suspended for two years, in October last year, after being found guilty of robbery and five counts of fraud.

“But following the Solicitor-General’s intervention, the Court of Appeal increased their sentences to three years’ immediate imprisonment.

“They were required to hand themselves into police by 6pm on Thursday (12 March) but failed to do so.