A new book tells the story of how five teenage friends from Brighton ended up embroiled in the civil war in Syria, costing four of them their lives.

The book, by the award-winning journalist Mark Townsend, focuses on the Deghayes family, who settled in Saltdean as refugees fleeing the brutal Libyan regime of Muammar Gaddafi.

And it looks at how racists targeted and taunted them until the young brothers turned the tables, landing up in trouble in Brighton – or dead on the battlefield.

The book, No Return, is featured in the news review section of The Observer newspaper today and is due to be published early next month.

In the Observer feature today, Mr Townsend explores how the five young friends ended up in Syria.

He said: “No Return tracks five teenage friends from Brighton who stepped into its chaos. All were killed except one.

“The survivor, Amer Deghayes, is the longest-serving Briton in Syria since the fighting began and offers a unique account of a ceaseless, shifting conflict.

“Equally crucial are those he left behind. I learned that more than 30 Brightonians – the largest identified group of potential jihadists in western Europe – had discussed plans to join him.

“All were between 13 and 18 years of age, some were girls and most were white, working-class Islamic converts from the forgotten estates of east Brighton.

“Investigating what had happened to these youngsters, I discovered the Hillstreet Gang (HSG), whose members had converted to Islam in a makeshift gym.

“For several years the police considered them the most notorious street gang in Brighton. A hidden, violent side of the city revealed itself.

“Throughout the summer of 2018 I tracked down prominent members one by one, knowing that approaching the group would mean instant rejection.

“But like their friends who had disappeared in Syria, key figures would vanish from Brighton, often into prison.

“One central member of HSG who appears in No Return was jailed for 20 years, so I didn’t get the chance to interview him.” 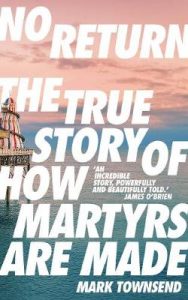 Describing Amer Deghayes’s visits to the beach in Saltdean, Mr Townsend said: “As a young teenager, Amer Deghayes would come here for peace and stand up to his ankles in the water, peering into the sea.

“Peace was a fleeting concept when you lived with four younger brothers.

“The nearest in age to Amer were twins Abdullah and Abdul. Next came Jaffar. Mohammed, the youngest, was the quietest.

“Accompanying them would be their mother Einas, a timid woman whose parental strategy was geared towards kindness with as little confrontation as possible.

“Her husband, Abubaker, was a thickset alpha male with a prayer bump on his forehead that proved his piety.

“Abubaker’s brother Omar, inspired by their father, became a lawyer with ambitions to represent the oppressed.

After graduating in law from the University of Wolverhampton, Omar, 31, travelled to Afghanistan on a round-the-world trip to experience Islamic cultures.

“There he was embroiled in the US invasion that followed the aftermath of the September 11 attacks.

“Captured by mercenaries and sold for a reported $5,000 to US intelligence, he was deported to Guantanamo Bay in a case of mistaken identity, confused with a Saudi jihadist who was later killed by Russian forces.

“Omar spent almost 2,000 days inside the gulag, where he was tortured and lost the sight of one eye.

“By the time he returned to Brighton in 2007 his wife, whom he had met on his travels, had divorced him. He had lost everything.”

Mr Townsend said: “At Longhill School the four younger boys were subjected to racist comments and bullying. The attacks were daily, merciless and unrelenting.

“Water was lobbed over the twins as they queued for lunch in the canteen. Bread buns were hurled at them as they ate.

“Taunts of ‘Paki’ and ‘terrorist’ followed them around the playground. They were cornered and beaten on the school bus back to Saltdean.

“Even when they made it to home turf, there was no respite. Anti-Islamic graffiti began appearing on the quaint seafront promenade, 200 metres from the family home.

“At night, their attackers would mass at the Oval and creep up the hill towards their home where they would stand in the small front garden, shouting obscenities, the familiar favourites of ‘Paki’ and ‘terrorist’.

“Bricks would hit the house. Some of the gang would start kicking the front door. When they grew bored, they would leave.

“Then the family would quietly shuffle to bed, too petrified to venture downstairs.

“According to local activists, police gave the impression they were happy to abandon the family.

“The twins in particular felt the police did not respond to the racism and that reports of harassment and anti-social behaviour against them were not investigated, according to one of their case workers.

“Behind Brighton’s progressive image of green politics, veganism and tolerance was a competing, ugly reality.”

Mr Townsend tells how the young boys turned from being bullied into teenagers who fought back and how, in October 2013 and January 2014, five young friends – including three Deghayes brothers, ended up Syria.

Not long after, Abdullah Deghayes was killed by a sniper. Mr Townsend said: “Within six months another brother and two friends were also dead.

“Mo Khan had been killed by a Russian explosive, Ibby by an American cruise missile, and Jaffar by Syrian army regulars. His body was never found.

“Ibby’s mother, Khadijah Kamara, wrote to the Home Office asking why her eldest boy had been allowed to travel using not just the wrong passport but that of a 15-year-old.

“‘As a mother I feel that I am owed an explanation,’ she wrote. But no explanation was forthcoming. “‘What made me angry was that nothing was done about it. My son was just another dead jihadi. They let them go to die.’

“The city put a lid on the case, hoping that no one would pry too closely.

“Within the council and police, the fact that the scale and scope of the extremism had not been exposed was a source of relief.

“Rather than drilling down into the issues – the injustices and ignorance that caused the problem – officials walked away, keen to move on.”

No Return: The True Story of How Martyrs Are Made by Mark Townsend is due to published on Thursday 2 April by Guardian Faber.