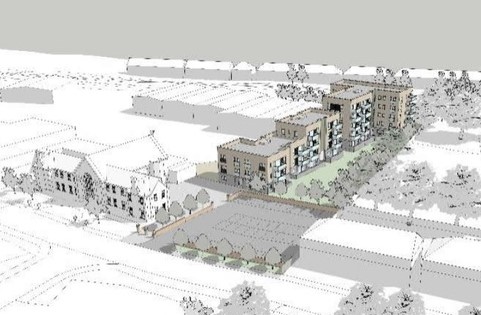 The estimated building costs for new council flats in Portslade have increased by 20% to £15.6million.

Labour and Green members of Brighton and Hove City Council’s Housing Committee approved the extra cash for what was a £13 million scheme to build 42 council flats in Victoria Road.

The new development in two blocks on a former housing office site next to Portslade Town Hall secured planning permission on Wednesday, 22 April.

Inflation, as well as potential labour and skills shortages, were cited as reasons for the increased cost, which comes 16 months after the committee agreed to the original budget on an eight to two vote.

He said: “We are building homes at 50 per cent more than what it costs to buy them on the open market today.

“I know we want sustainable building and I know 42 properties are important, to be it should not be at any cost, £335,000 a unit is far too much.”

Fellow Green David Gibson said the price of building new houses is high, but is offset by the carbon savings and the additional benefits for tenants.

Councillor Gibson said: “Buying houses has the advantage of being quick and in the short-term being cheaper.

“That is why we are expanding the home purchase policy. As house prices fall further, this will make it more effective.

“But while it provides one additional affordable house, what it does not do is increase the housing supply for the city overall.”

Green councillor Siriol Hugh-Jones reminded Councillor Wares it costs five times as much to retrofit properties than to make them energy efficient from the start.

She praised the use of a ground-source heat pump and solar panels, green walls, an orchard,  as well as community garden and vegetable patch as bringing health benefits.

Councillor Hugh-Jones said “We are building for a different way of life. A way of life where people do not feel cold in their homes.

“Even at this time of year, we can feel cold in our homes. The residents of these blocks, we hope, will never experience that.”

North Portslade ward Labour councillor Peter Atkinson praised the “win-win” situation that sees the bowls club move from the site to nearby Victoria Park and benefits from a new pavilion.