The operator of a new seafront venue has applied for a licence to serve alcohol.

Sessions Market, the leaseholder of the remodelled Shelter Hall, in King’s Road Arches, Brighton, wants a licence from 8am to 11.30pm daily.

When the venue opens, it is expected to house up to 10 independent restaurants and street food vendors.

But the Shelter Hall – opposite the bottom of West Street – is in the heart of an area designated the “cumulative impact zone” by Brighton and Hove City Council.

The council – which owns the Shelter Hall – has a policy “matrix” which largely restricts new licences in the zone.

And the council’s own officials have asked for the application to be considered by a licensing panel made up of three councillors.

A report to the panel, which is due to meet next week, said: “This premises is on the seafront and includes an outdoor seating area.

“The operation is described as a ‘food-led hall with ancillary bar provision’.

“This is a new style of operation and unique in Brighton and Hove. As a result, it does not neatly fit within any categories identified in the matrix.”

The matrix is the council’s guide to what licensed businesses are permitted in different areas of the city.

To try to satisfy the licensing panel, the operator has agreed that the premises would be “food led” at all times.

Substantial hot food would be available from at least three of the seven kitchen serveries until not more than 60 minutes before the end of alcohol sales.

The ground floor area would have to be supervised by at least two staff, with at least one more on the first floor and balcony.

Drinks would only be served to customers seated in the outside terraced area by waiters, with no “vertical” drinking allowed.

Customers would not be allowed to take alcohol away from the premises. 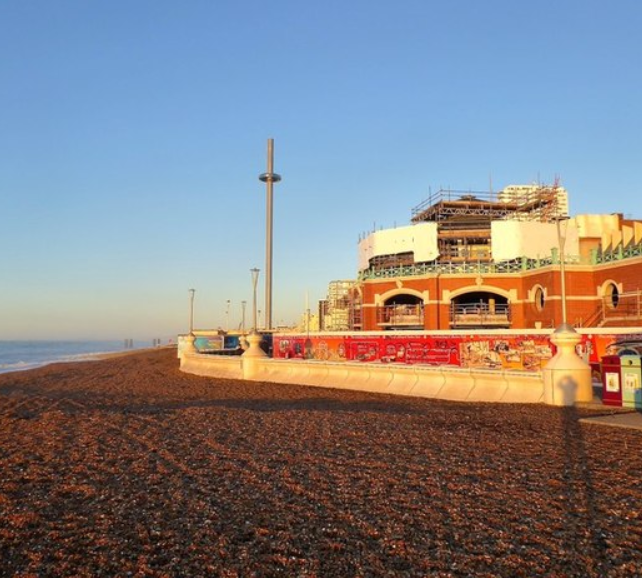 The Shelter Hall by Simon Carey

The report said that the Shelter Hall was in the council’s Regency electoral ward which has the worst record out of 21 wards for violent crime.

Regency ward has the second worst record for police-recorded alcohol-related incidents and ambulance call-outs and A&E attendances suspected of being alcohol-related.

Sussex Police has not objected to the application.

The licensing panel that will decide whether to grant a drinks licence is expected to be made up of three experienced councillors – one from each political party.

The panel is due to hold a “virtual” meeting starting at 10am on Thursday 11 June.