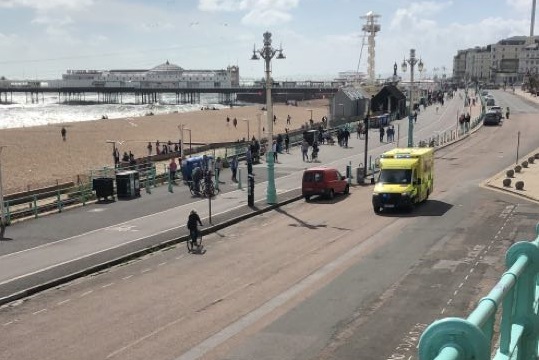 The coastguard pulled a struggling swimmers out of today’s stormy waves as he was being sucked out to sea today.

The man entered the water on the Kemp Town stretch of Brighton beach at about 4pm and quickly got into difficulties.

Two more people went in to try to get him out, but were not able to get him back to shore. He was eventually rescued by the coastguard and police.

Toni Hall saw events unfold from her flat in Chichester Terrace after she noticed a large crowd of people trying to help the pair by the nudist beach.

She said: “There were two people in difficulty in the sea. They were quite far out and clearly struggling.

“The coastguard arrived in a car and then ambulances. The swimmers were being dragged over towards the marina and there were waves crashing over their heads.

“Then I saw the lifeguard get into the sea and swim towards them. I thought how is he going to get there because the sea was so stormy.

“One of the swimmers managed to get back to the shore but it took quite a long time to get the other one back.

“By then, he was almost near the groyne in front of Black Rock so they had really been pulled across the beach.

“As the swimmer and the lifeguard were getting towards the shoreline, the waves were getting bigger and they were being crashed so violently by the waves they couldn’t get up.

“A couple of bystanders were trying to grab them and pull them to safety, but the waves would just crash over them.”

As well as the coastguard, RNLI Shoreham, police, paramedics and the council’s lifeguards attended the incident.

One swimmer appeared to be okay, but the other was stretchered away.

Ms Hall said: “I can’t believe anyone would go into the sea today. It’s the kind of sea which is swirling rather than pushing inwards to shore.

“I just thought it was incredible that the lifeguard had the strength to swim towards them. He put his life at risk to save two people who had the insane idea to go for a swim in these seas.

“And the way the public were trying to help was quite humbling.”

A spokeswoman for RNLI Shoreham, which was launched in response, said: “A swimmer went out too far and got into difficulties. A couple of people tried to reach him and couldn’t,

“We were called at 4.10pm and launched but when we went over there, the conditions were too rough for the big boat to reach him.

“However, our excellent partners in the coastguard and police managed to get to swimmer back to shore and into the care of South East Coast Ambulance Service.”