Statues and racial classification certificates – lessons from our recent history

The debate about whether statues of Cecil John Rhodes, slave owners and even former kings and queens should be pulled down made me think of a very small piece of paper that I possess. 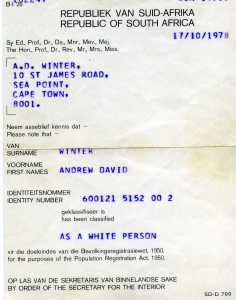 It was issued to me in 1978 shortly before I left South Africa. Under the Population Registration Act, 1950, every South African had to have a racial classification.

When I first arrived in England in February 1979, I almost tore it up in disgust. I found racial classification certificates abhorrent.

But something persuaded me not to do so.

When I now look at this document it reminds me of the stark reality of apartheid. Being classified “as a white person” was a passport to relative privilege and opportunity, particularly if you were a white man.

Today I am so pleased I kept it as most people, when I have shown them my racial classification certificate, are shocked and appalled.

Destroying this little piece of paper would have achieved nothing other than reducing history.

Documents like this are important so that we don’t forget what has gone before and it should increase our determination to make sure that it never happens again.

Don’t destroy statues. Move them, but put up a plaque contextualising who they are representing and what they have done.

Statues remind us of our history. They might offend. We might rightly be appalled that some monsters are being commemorated.

But they recall history and are a reminder that, even though we might not be the perpetrators of the crimes some perpetrated, many of us are probably beneficiaries.