An all-day search for a missing kayaker has been called off, with coastguard, police and lifeboat crews standing down late yesterday (Sunday 2 August).

The coastguard said that the “intensive” search had been called off “pending further information” after a kayak and paddle were found ashore.

The kayaker was seen going into the sea near Hove Lagoon yesterday morning.

The RNLI Shoreham lifeboat said: “The 10-hour search for the missing kayaker has been called off and our lifeboats have been stood down and returned to station along with Shoreham Coastguard Team, HM Coastguard, Brighton lifeboat and the coastguard helicopter.”

Earlier the coastguard said: “At 10.10am today (Sunday) HM Coastguard received a report of a person seen going into the water from a kayak/canoe off Hove Lagoon.

“A kayak and paddle were found ashore in the area.”

Later, an update from the Maritime and Coastguard Agency said: “HM Coastguard has now received the information required and confirmed the identity of the kayaker, who remains missing and the search is ongoing.”

There had been suggestions that the kayaker might have come ashore and left the kayak and paddle to collect later.

It was also noted that there was a strong offshore wind and an outgoing tide for some of the duration of the search.

The coastguard said that the past few days have been among some of the busiest in years as people have taken to the water, particularly along the south coast and east coast. 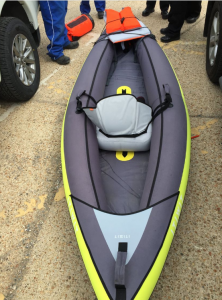 They urged anyone going to sea in a kayak or canoe to take basic precautions including: “Ensure that someone at home knows your passage plan including points of arrival and departure, timescale, number in group and other relevant information.

“Check weather forecasts and tidal conditions and ensure that your skill levels are appropriate for where you are kayaking.

“Wear a buoyancy aid and check that equipment is functioning properly, that your distress flares are in date and are stowed where you can reach them.

“Carriage of a 406 Personal Locator Beacon is highly recommended for more remote locations.

“Carry a VHF marine band radio (fitted with DSC if possible) and learn how to use it.

“Where there is good network coverage then it is worth carrying a mobile phone in a waterproof bag.

“Call the Coastguard if you get into difficulty, preferably via channel 16 on your radio or if not by calling 999 and asking for the coastguard.

“Join the RYA’s SafeTrx safety identification scheme – it’s free and will give HM Coastguard the information that they need to get you an even swifter response in an emergency.”