Brighton and Hove Albion defender Ben White has signed a four-year deal with the club, ending speculation about his immediate future.

The club said this afternoon (Tuesday 1 September): “Ben White has extended his stay with Albion, after agreeing a new four-year contract with the club, running to June 2024.

“The 22-year-old defender will be part of Graham Potter’s Premier League squad for the coming season after an impressive season on loan at Leeds United in the Championship.”

Head coach Potter said: “I have been looking forward to working with Ben for a long time. He was a player I was well aware of, even before I came to the club.

“He has gradually stepped up the EFL divisions, with Newport County, Peterborough United and Leeds United.

“He had a brilliant season helping Leeds to the title last season and now he has the opportunity to show his qualities in the Premier League.

“We are delighted to have agreed a new long-term contract with him and I am sure our supporters will be looking forward to watching him play for the club.”

Albion’s technical director Dan Ashworth said: “There has always been a strong belief in Ben at this football club and his ability to play at this level of the game.

“This new contract is well deserved for Ben. He has worked incredibly hard and has not been afraid of going out on loan. We have been delighted with his progress.

“Our academy and player loan department have done an excellent job to bring Ben through the club’s younger teams and then in helping to oversee his development while out on loan.

“He has played at almost every level of the professional game and his development has been very well managed.

“His next challenge is to show his capabilities at the highest level of the domestic game.”

The club added: “White joined Albion in 2014 before graduating through the club’s junior teams to the under-23s under Simon Rusk.

“He made his senior debut for Albion in the Carabao Cup in 2016 in a 4-0 win over Colchester United at the American Express Community Stadium.

“White also played in the 4-2 win at Oxford United in the next round and featured regularly in the EFL Trophy that season.

“He also appeared on the bench in the Championship as Albion went on to win promotion to the Premier League. 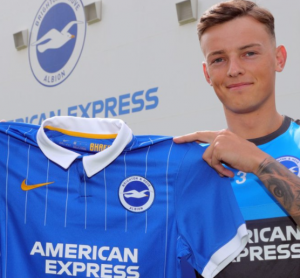 “He spent the next season on loan at Newport, and was the club’s Player of the Season, prompting County boss Mike Flynn to describe him as ‘the best loan signing the club has ever made’.

“In 2018-19 he spent the first half of the season with Albion, featuring in the EFL Trophy and Premier League 2, as well as being named in the match-day squad in the Premier League for the first time that December, for the trip to Burnley.

“The following January, White went on loan to Peterborough, and the following summer went to Leeds United for a season loan under Marcelo Bielsa.

“He played every minute of 46 league matches for Leeds, helping the club win the Championship and promotion to the Premier League.”