At least four protesters from Brighton are among those arrested by police in London as Extinction Rebellion (XR) stepped up its campaign in the capital.

About 40 XR protesters had pushed a 20ft red and white model boat dubbed the Greta Lightship from Brighton to London, accompanied by a samba band.

They aimed to join a national demonstration with the boat which was named after the 17-year-old Swedish environmental activist Greta Thunberg.

But in Kennington, south London, on Saturday (5 September) the Metropolitan Police impounded the boat and detained the crew.

Extinction Rebellion Brighton’s Claudia Fisher, 58, was arrested after gluing herself to the model lightship as the police tried to seize it.

Before her arrest she said: “We’re highlighting the climate and ecological emergency that we’re already in middle of.

“We’re shining a light with a lightship. It’s a beacon of hope on that dark situation.”

At least three others from Brighton were arrested for sitting in the road in Parliament Square, London, during the first days of the demonstration.

XR said that all three had been released pending investigation.

Ms Fisher said: “The voyage of Lightship Greta will echo the journey that many climate refugees are taking right now and many millions more will be forced to undertake.

“More of us will be displaced and have to leave our homes for each degree of heating of our earth.

“As the seawater rises and the fires burn, where would you go?

“This is a crisis that will impact us all. It is just a matter of time – and time is running out. 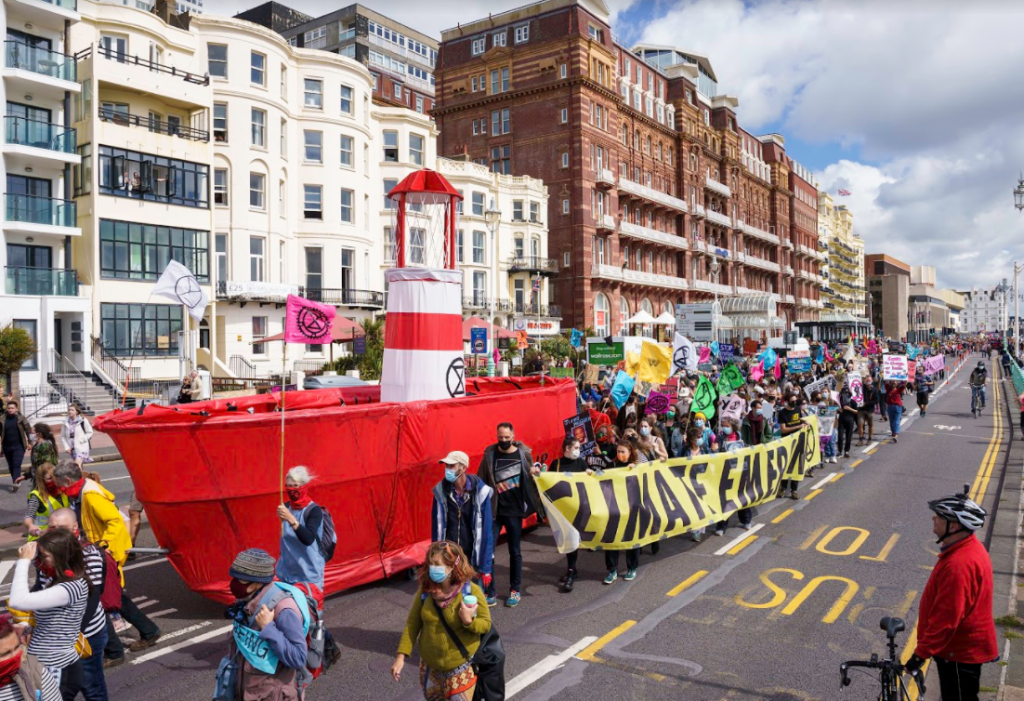 The Greta Lightship on Brighton seafront – Picture by James Cooley

“The United Nations estimates there are already 25 million climate refugees and this number is expected to double over the next five years.

“By 2050, it’s estimated that there will 10 times the amount of refugees that we have today.

“That means that one in every 45 people in the world will be forced to become a climate refugee due to unprecedented levels of environmental degradation and global heating.”

Faith Terry-Doyle, of Extinction Rebellion Brighton, said: “Developing countries are the least responsible for emissions of greenhouse gases but they are being most impacted by climate breakdown and they will continue to be disproportionately affected by the crisis.

“As people from high-income, high-emission countries, where the use of fossil fuels is intensive, we have the responsibility to make a stand and put an end to this unsustainable and deeply unethical way of living.

“We have the responsibility to do this for our fellow humans on this earth and for future generations to come.”

“We all want to live.

“But when we pull together we can make great change. Our government isn’t protecting us and we need people power to change this.”

XR held a protest in Brighton the previous weekend.