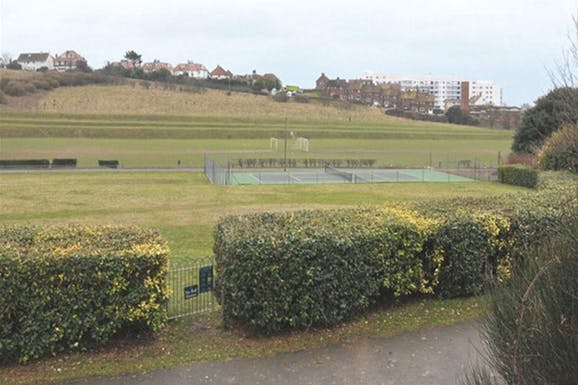 A new walk-in coronavirus test centre in East Brighton park has opened today as part of a pilot for new walk-through sites accessible on foot or bike.

Anyone wanting a test must book an appointment, as with the mobile drive-through test centre currently operating from Withdean or Brighton racecourse.

Capacity in Brighton and Hove appears to have been restricted as testing resources are directed more at areas with higher rates currently under local lockdown.

A worker at the Withdean mobile site told one woman that only 56 people had been tested there on Saturday, September 12 and that they were “sitting around doing nothing”. In the same week, areas in hotspot areas were testing about ten times as many people per 100,000 population.

But even though it’s not clear if this site will increase the number of tests available locally, it will make it a bit easier for the many people in Brighton and Hove who don’t have a car to access a test more quickly than a home test.

“We have had months to sort this test, track and trace system out but the Government have failed now just as we are heading into a potential second wave.

“I have been dealing with distressed constituents on a daily basis who have symptoms and simply can’t get tested, I hope this new testing centre can alleviate some of the pressure on the testing.

“I will continue to monitor the situation closely and if we need more testing centres than that is what I’ll be demanding from the Government.

“The site is good but there are two qualifiers. Firstly, there is no guarantee that the number of tests allocated to the city will actually increase (the tests are test by DHSC).

“The city has asked but they have not confirmed that opening up a new site will increase the number of tests of just dilute the number of restricted tests.

“It might increase the testing numbers/DHSC might allocate more slots to the city because of the second site, but both are projected to be under capacity (the physical testing will and can take place but DHSC limits the number of people from Brighton who will get their test processed, this is why some people using Scottish postcodes are able to get a barcode and get a test in Brighton, the limit is not in the location its is a limit on where people are from).

“Secondly, this is really great that its walk in (and there is some talk about converting the mobile units to walk in and placing them at Universities if need be, but this is not confirmed/agreed by the DHSC), but many people will want or need to drive to the site (or even get a taxi).

“I have asked for a proper drop off point of cars, and a short, preferably free parking for testing only on the East Brighton park road which currently has mid-stay pay car parking.

“The city is trying to get DHSC to help pay for the parking slots (which is fine) but this shouldn’t be used to delay as there is a danger that people will have to park far away or in residential streets adding to the already pressured area which serves the hospital.”

In a letter to Mr Russell-Moyle, Parliamentary Under Secretary of State for Innovation (Lords) Lord Bethell said: “I wanted to write to you to confirm that we are opening a local test site in your constituency at the East Brighton Park Tennis Courts, over the coming days.

“I hope this site will make it easier for many people in Brighton to access testing.

“This site forms part of a pilot to open new ‘walk through’ Local Test Sites in England which are easily accessible by foot or on a bike.

“Before selecting this site, we have engaged with local stakeholders to narrow down the location and identify a suitable site. This includes the local authority and NHS stakeholders.

“In order to reach a decision, we have considered which site is most suitable for safely testing as many people as possible and how long it is available for.

“This expansion of testing supports the existing NHS and Public Health England infrastructure, which has more than doubled its testing capacity since the coronavirus pandemic began, supporting our commitment to expand local direction of national testing resources and move to a more locally owned and delivered testing model.

“Across the UK testing capacity has been expanded to more than 350,000 tests a day, meaning that anyone with symptoms can immediately book a test for free.

“Local authorities in England will have greater autonomy to deliver different types of testing models which are suited to the needs of their population and local communities.”

Brighton and Hove City Council said they could not say what was happening at the tennis courts and directed us to the Department of Health and Social Care (DHSC). The DHSC has not yet responded.

To book a test, visit this page of the NHS website or call 119.