One of Albion’s longest-serving players, Dale Stephens, who joined the club in 2014 under Oscar Garcia, has left Brighton and Hove Albion to join Burnley. 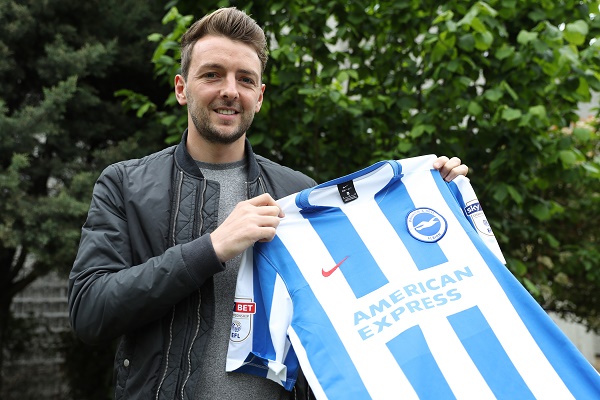 The former Bolton and Charlton midfielder scored 15 times for Albion in 223 appearances. His only Premier goal came at West Ham in January last year.

Head coach Graham Potter said: “The number of appearances Dale has made for the club speaks volumes for his contribution to the team over recent seasons.

“He has been a model professional throughout my time at the club and, as one of the more senior members of our squad, he has been a great influence and example to the younger players coming through.

“We have fantastic competition for the midfield positions and, with Dale’s desire to play regularly, this represents a good move for both the club and Dale. He leaves with our thanks and very best wishes for the future.”

Stephens arrived from Charlton Athletic in January 2014, having helped the Addicks to the League One title the previous season and soon became a mainstay at the heart of the Seagulls midfield.

He went on to play a key role in the side’s promotion campaign of 2016-17, making 39 Championship appearances, and in three Premier League seasons he played 99 times.

Chairman Tony Bloom said: “Dale will always be remembered for the important role he has played in the recent history of our football club.

“He was key in both our promotion from the Championship and in establishing the club in the Premier League.

“Albion fans will have great memories of Dale as a regular in the midfield in that promotion-winning campaign, and also for the way he comfortably adapted to life in the Premier League where he has been a model of consistency.

“Thank you Dale for your contribution these past six and a half years and be assured that you will always be welcome at the Amex.”

Bolton-born, Stephens started out with Bury and made his professional debut against Peterborough in February 2007.