Campaigners accuse council of discriminating against people with disabilities

These included the closure of Madeira Drove and the creation of a seafront cycle lane, both of which made access harder for the most disabled, according to Brighton Access for Disabled Groups Everywhere (BADGE).

Members of Brighton and Hove City Council’s Environment, Transport and Sustainability Committee were told that the removal of blue badge parking spaces made people feel discriminated against.

BADGE campaigner Pippa Hodge told the committee about the impact of the changes on disabled people at a “virtual” meeting yesterday (Tuesday 29 September).

She told councillors that this was the second time that she had had to raise the issue of equalities alongside BADGE co-founder Rob Arbery.

Last year the pair were fighting for their children and others like them after problems with the council’s home to school transport service for some of the city’s most vunerable children.

She slammed the council for a lack of consultation after the changes were made without speaking to disability stakeholders about changes to road layouts and parking capacity.

Ms Hodge said: “The schemes imposed have severely disrupted parking and access for the blue badge community and extended our lockdown hell while protecting other people’s essential journeys, alternative travel and safer spaces.

“Our BADGE members generally aren’t the ‘disabled people who can cycle or walk instead’ kind. Our cars represent our human freedom.

“The eligibility threshold for a blue badge is extremely high.”

The committee was told that the projects – part of the council’s Urgent Response Transport Action Plan prompted by changing travel patterns during the coronavirus lockdown – had removed the largest block of blue badge parking in Brighton.

It had reduced the number of bays, limited access to accessible toilets, imposed time limits and curfews, and “relocated” disabled parking three-quarters of a mile from the city centre.

Ms Hodge said that seven bays on the seafront were too short for ramps, too narrow for wheelchairs and too close to cyclists “whizzing past”.

She said that there was discrimination, with the council removing part of the seafront cycle lane within six days when it disrupted commercial bus routes, in “stark contrast” to the needs of those with disabilities.

She shared comments from seven disabled people affected by the changes. One said: “We aren’t ever going to be near ‘normal’ any more.

“No more stops to just pull in to get a cup of tea and watch the sea. I cried. We feel unwanted in this town.”

Conservative councillor Lee Wares backed Ms Hodge and called for an Equality and Human Rights Commission investigation into the allegations.

He also wanted a Local Government Association review and report into allegations about the lack of consultation with representatives of people with disabilities – despite a legal requirement.

By failing to consult with disabled people, Councillor Wares said that the groups were alleging that the council had not complied with the Equalities Act.

He said: “I have made inquiries to the council and received a response. To be frank, I am none the wiser as to the position. I have replied to the council but as yet have had no further communication back from them.

“To be clear, I cast no aspersions and arrive at no conclusion. I accuse nobody of anything.

“However, I take the allegations seriously, and so should all councillors, and to do nothing is not an option.”

Green councillor Amy Heley, who chairs the council’s Environment, Transport and Sustainability Committee, said that the council’s duty to consult still applied, and it is “committed to delivering inclusive, accessible transport”.

The closure of Madeira Drive had been made using an “experimental traffic regulation orders”, giving the council more flexibility to respond and adapt to the city’s needs as feedback was received. 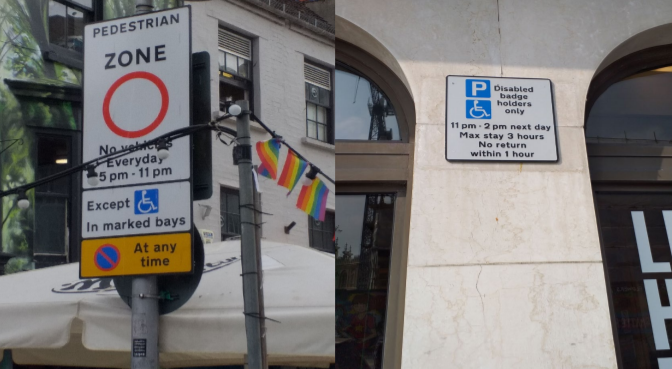 Councillor Heley told Councillor Wares that the Conservative Transport Secretary Grant Shapps had required councils to start work within four weeks of receiving the first wave of funding and complete the work within eight weeks.

She said: “I want to stress that this situation does need to be resolved – and it’s vital disability groups feel part of the response to the changes and measures to combat covid-19.

“I have met with BADGE and Possability People and am instructing officers to work collaboratively with them going forward.”

Labour councillor Gill Williams said that the decisions were made very quickly because of the covid emergency.

She said: “What we really need to be doing now is thinking about a way forward that includes meaningful consultation for the future for permanent changes to the city.

“All our efforts would be best going in that direction.”