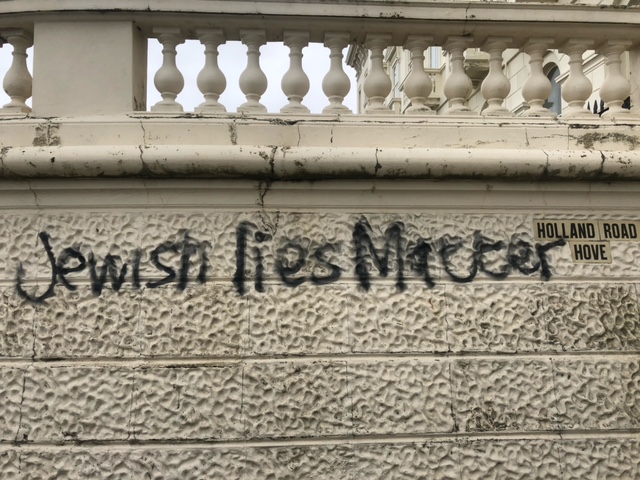 Anti-semitic graffiti daubed on a wall and a beach hut in Hove has been swiftly removed following an outcry from the Jewish community.

The slogan, Jewish lies matter, was sprayed on a wall in Holland Road, and on one of the Hove beach huts.

It was reported to Sussex Police as a hate crime, and to Brighton and Hove City Council, and removed by the end of the day.

The Sussex Jewish Representative Council said: “It is very concerning to see this highly political, anti-semitic graffiti on a wall in Brighton only minutes away from three synagogues. Many community members have seen it and it has caused great distress.

“This is not the ignorant scrawling of a stupid kid but a targeted political message intended to cause offence.

“This kind of incendiary language must be dealt with with the utmost seriousness and we thank Sussex Police for their prompt attendance at the scene.

“It is time Brighton and Hove City Council made it clear that anti-semitism will be treated as vigorously as all other forms of racism and that it will not be tolerated in the city.”

Superintendent Rachel Swinney, who is based in Brighton and Hove and serves as the hate crime lead for Sussex Police, said: “I understand the distress and concern that this incident will cause. This matter is being dealt with as a hate crime and I want to offer reassurance and say that we take criminality of this nature very seriously. We are doing everything we can to progress this investigation.

“We continue to closely monitor hate incidents. It remains a priority for us to identify and hold those responsible to account. I would ask the public to remain vigilant. Please report any incidents of hate crime to us without delay.”

Council leader Phélim MacCafferty said: “We do not tolerate offensive graffiti in Brighton and Hove. It’s particularly disturbing to, once again, see such graffiti in our city. This anti-semitism is repugnant and has no place in our city.

“The graffiti has been sprayed on a wall only a week after international commemorations for the anti-semitic pogrom of Kristallnacht in Germany in 1938.

“The offensive graffiti has now been painted over and the city council has reported the matter to Sussex Police as a hate crime. We urge anyone who spots this type of graffiti to contact both the council and police as soon as possible.

“We will of course assist the police with any inquiries they receive on this.

“As leader of the city council I would like to extend my solidarity to the communities affected by this racist, offensive rubbish and to the vast majority in our city who despise racism.”

Anyone with information on this particular matter is asked to report it to police online or call 101 quoting reference 150 of 17/11.