A Brighton state school has been ranked among the cricketing elite for the second year in a row.

The Brighton Aldridge Community Academy (BACA) is one of the top 100 senior schools for cricket alongside the likes of Eton, Harrow and Winchester, three of Britain’s leading public schools.

The only other local secondary school to make the top 100 list, compiled by the Cricketer magazine, was Brighton College although Roedean made the first top 20 list for all girls schools.

Other Sussex schools on the list were Bede’s, Lancing College, Hurstpierpoint College, Eastbourne College and Worth School – all fee-paying schools.

BACA said: “All entries for the Cricketer’s Top 100 Award were judged against an extensive set of criteria, which included a compelling commitment to cricket in the curriculum, facilities, fixture programmes and coaching.

“The magazine’s editor Simon Hughes congratulated all of the schools recognised this year and paid tribute to those ‘who have kept the game alive through a very challenging summer’.

“BACA first joined the leading cricket magazine’s top 100 list last year and retains its prestigious status in a list dominated by fee-paying schools despite a record number of entries this year.

“BACA is the state school partner of Sussex Cricket, offering students from year 7 up to sixth form the chance to combine their academic studies with top-class cricket coaching in exceptional facilities.

“These include a £2 million indoor school and a Premier League standard cricket square maintained by Sussex Cricket ground staff.

Aldridge Cricket Academy director and Sussex Women head coach Alexia Walker said: “Everyone was looking forward to the final indoor preparations in anticipation of a long summer out in the middle, then suddenly we were faced with online cricket only.” 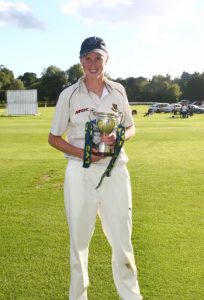 BACA said: “The perseverance of the players and staff to keep momentum meant that, when the restrictions lifted, the opportunities to train and get back to the sport happened swiftly in covid-compliant facilities.

“In late July, normally a quiet time in the school holidays, BACA’s cricket square went into overdrive as competitive cricket returned, thanks in no small way to Sussex Cricket groundsman Dan Millis-Smith.”

He prepared the cricket square ready for more than 40 matches in six weeks involving BACA teams and Sussex Women and Girls fixtures.

BACA student Findlay Durrant said: “During the first lockdown we stayed in touch via Zoom meetings with our strength and conditioning coach and doing workouts in our house or in our garden.

“These kept us ticking over and made sure we would stay in good shape and ready to come back when the government allowed us.”

Fellow academy player Emily Spooner said: “The Zoom calls would consist of gym sessions that were altered around what equipment each player had available.

“And we also went through tactics that then helped us understand the game in better detail from a bowling, batting and fielding perspective.

“They helped us stay in high spirits for when we were allowed to continue with cricket again.”

Alexia Walker said: “This news that BACA is once again in the top 100 cricket schools in the country is great recognition for the efforts of our students, our coaching staff and the Sussex Cricket coaches and ground staff who work so closely with us.

“We could not have provided over 50 days of high-quality cricket in 2020 without ticking every box that the Cricketer’s judges were looking for.”

BACA principal Bob Speight said: “Cricket is a wonderful sport and I passionately believe that girls and boys at state schools should have an equal chance to enjoy it and have every chance to play at the highest level they can.

“This award is recognition that our partnership with Sussex Cricket is making a real difference to the chances of local children developing a love of the game and potentially following some of our former students into the top ranks of men’s and women’s cricket.”