Rail company bosses are looking for dozens of train drivers with a £31,000 salary on offer for new starters. 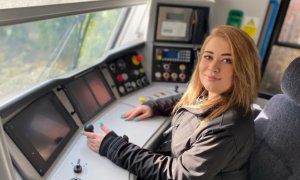 Govia Thameslink Railway (GTR) said that the company was looking for more than 160 drivers and offered an 18-month training programme to those who joined.

The company, which runs Southern, Thameslink and the Gatwick Express, said that the deadline to apply was midnight tomorrow (Sunday 13 December).

Successful applicants could be based at a number of locations, including Brighton, Barnham and London Bridge.

The company said: “Open to anyone above the age of 20, becoming a train driver is a fantastic opportunity for those looking to start their career, change paths or simply pursue a childhood dream.

“The operator’s 18-month trainee driver programme offers stability while training, with a starting salary of £31,000.

“The new recruits will join the company’s diverse team of drivers that deliver 3,600 journeys every day.

“The push for new drivers builds on the success of previous recruitment campaigns, which most recently resulted in double the amount of applications from women for driver positions this year compared to 2019.

“The company hopes to continue to attract more women to the industry, as well as a diverse range of candidates from all ages and walks of life that may have never considered a career in rail before.”

GTR’s head of talent, diversity and inclusion, Zoey Hudson, said: “This year has been tougher than ever for the job market but we’re continuing to invest in attracting and recruiting new and diverse talent into our business.

“It’s really important that we have a highly skilled and diverse workforce, which is why we’re encouraging people of all backgrounds to seriously consider a role as a train driver.

“We want to challenge the stereotypes that are associated with careers in the railway and we mean it when we say that these roles are open to anyone.

“Whether you’re just starting out or are looking for a new challenge having lost your job due to the pandemic – consider the railway and apply to our trainee driver programme.”

GTR added: “Applications for trainee drivers are open now and will close at 11.59pm on Sunday 13 December.

“Due to the ongoing covid-19 pandemic, initial interviews will be held virtually.

“Interested applicants should visit GTR’s career portal, which launched last year and has helped to streamline the hiring process as well as getting successful candidates into roles more quickly.”

To find out more or to apply, click here.