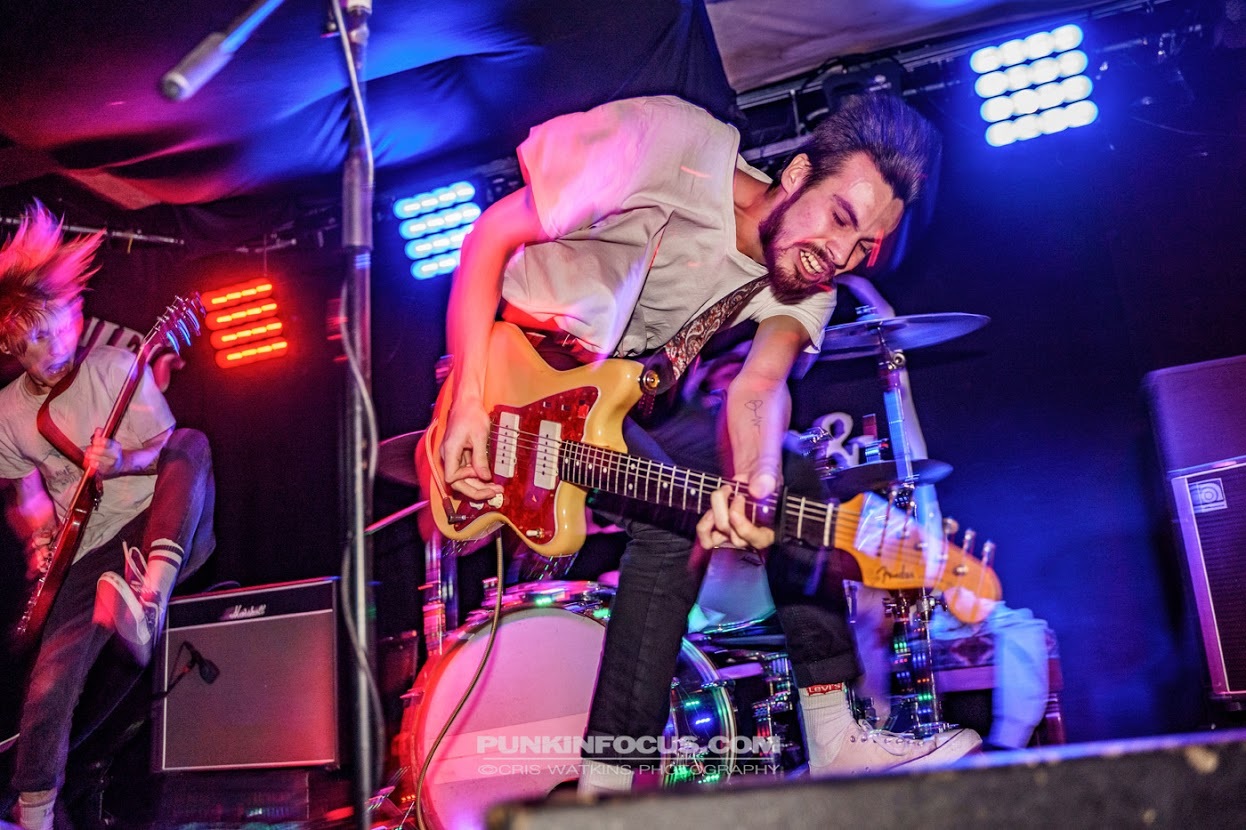 As large parts of the South-East prepare to enter another lockdown, Brighton yet again manages to dodge a bullet, and for tonight at least, the show will surely go on.

The Hope & Ruin located on Queens Road have successfully put on a four-night run of intimate socially distanced shows in their upstairs venue, which culminates tonight with a superb punk doubleheader.

Safety is top of the list with ‘Track and Trace’ in place and hygiene workstations at the ready, remember cleanliness is next to godliness, or so they say.
I’m surprised at how full the venue seems with tables spread out seating two and fours for a maximum capacity of just over 30 very fortunate punters. The lucky few are ready for a last blast of live music before the Christmas season kicks in and delivers an end to one hell of a challenging year for bands and venues alike. 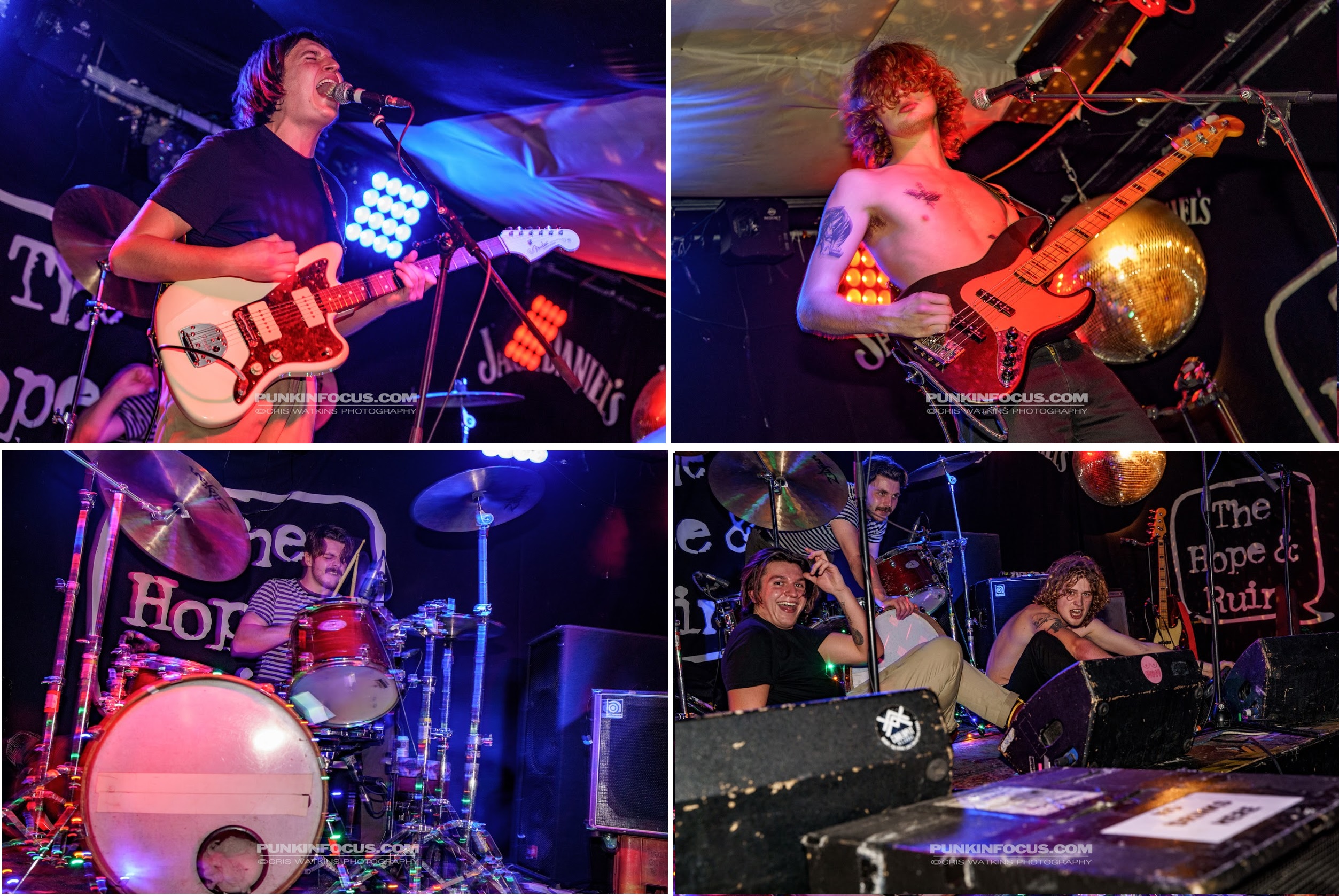 Kicking off this evening’s performance with a 30 minute set are Brighton’s own new punk rock darlings ‘Monakis‘. These guys caught my attention earlier this year with a couple of more than memorable shows back in March and I am happy to report that they’ve lost none of their charm or edge.

Slamming straight into recent single ‘Fake News’, with bassist/vocalist James Porter bare-chested from the get-go, tonight socially distanced but not sonically they’re here to deliver an action packed show and deliver they do!

They’ve not been sitting on their backsides these past months, as not only do they come across harder and tighter than before, they’ve got a killer arsenal of new material too! Just check out the bludgeoning cacophony of ‘Usual Suspects’ with Joe trying to knock his drumkit through to the floor below and ‘Rich’ a slogan loaded diatribe and future crowd favourite. It’s tough being at a punk rock show glued to your seat all night, but the look of delight on the faces of both the crowd and the band show just how important it is to be here, in order to experience live music again.

With their intense almost tribal rhythms, hook-laden guitar from the ever-impressive Aaron Butler and short sharp shout-along choruses, Monakis are going to be an essential part of the local punk scene in 2021. Check them out on Spotify HERE.

With around 40 minutes or so between sets, there’s enough time to order drinks, eat food and ingest nicotine before the next band hits the stage. 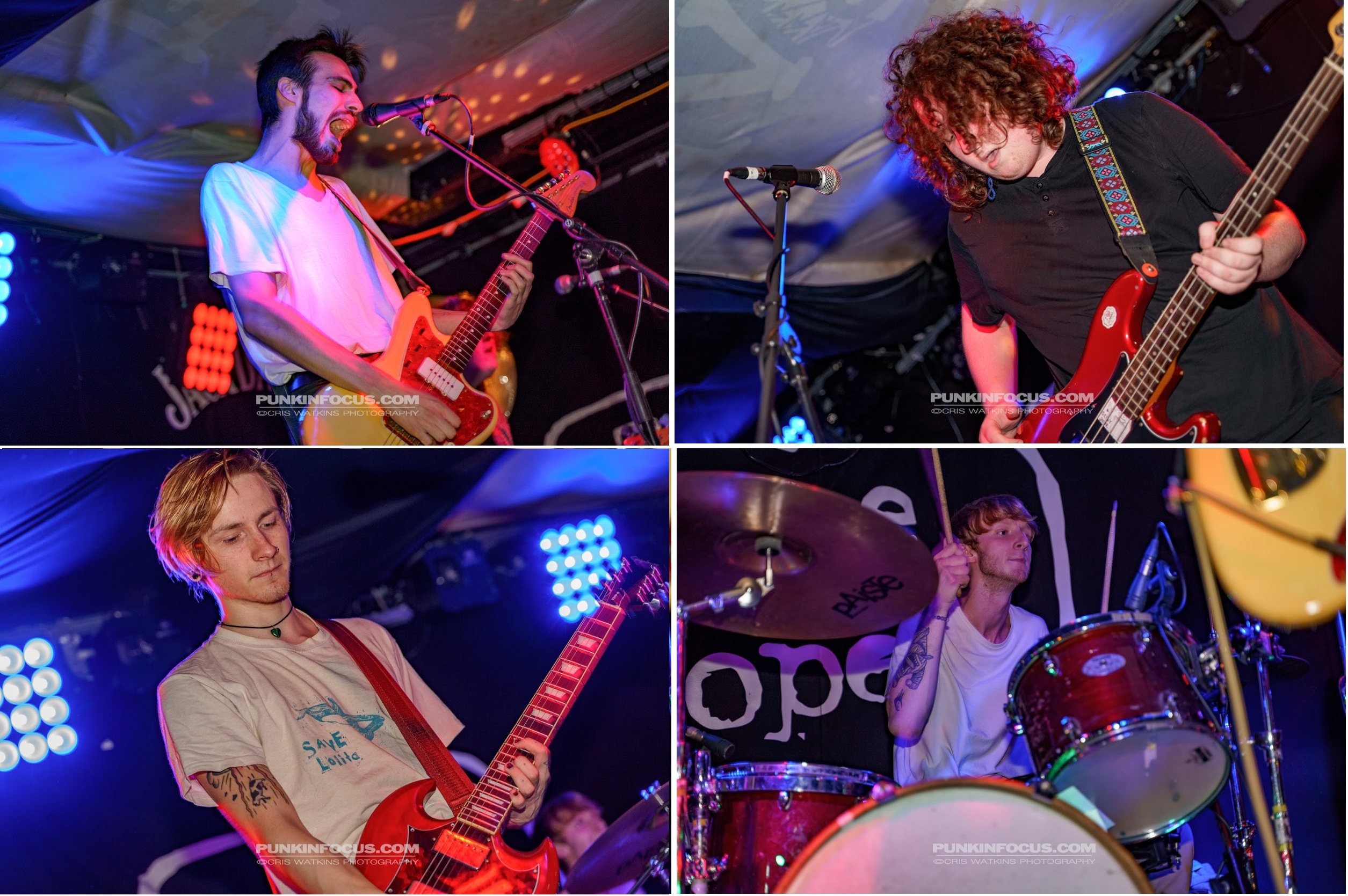 I’d not heard of CUTTING TIES before tonight, but as soon as the first track, ‘Romance With A Russian Woman’, reverberates from the ‘Ruin’s speakers I know I’m going to like them. They bring a fragile mix of 90’s pop-punk and emo with some crushing hardcore vocals delivered by agile frontman and guitarist, Alessandro Cogolo.

Touché Amoré, La Dispute and PUP all spring to mind, but so do elements of Green Day, it’s a tidy package, less Hermes and more DHL in delivery.

There must be something in the air tonight, and I’m not talking Covid, as a few songs in and bassist, Jack Smith is soon shirtless, his distinct full-frame bathed in sweat! This guy is solid gold rock ‘n’ roll and has the moves to prove it, while Alessandro cavorts and distorts not only his body and guitar but his vocals too, from melancholic to a scream. The lineup is completed with left stage, Sam Allen on guitar, and holding it all together, at the back Ben Turner on drums.

Highlights? The aforementioned, ‘Romance With A Russian Woman’, ‘When I Wake Up In The Morning’ and ‘IMD’.

Not sure how this four-piece had gone under my radar as they are an absolute blast and one fun live band to see. Check these guys out when you get the chance, you won’t be disappointed. Find them on Bandcamp HERE.

CUTTING TIES setlist:
‘Romance With A Russian Woman’
‘When I Wake Up In The Morning’
‘The Crying Song’
‘Volo’
‘It Doesn’t Get Better’
‘IMD’
‘Sleep Well’
‘Just Can’t Forget You’
‘Sunshine’
‘When Am I Going To Sleep’
‘One Day’

The promoter, Chris and The Hope & Ruin have put on a feat this evening and made a bleak Christmas that much brighter, let’s hope for more of these shows early in the new year.