A Hove man who broke a restraining order and harassed a woman, racially abused a man, assaulted two police officers and damaged two cars and a van is being hunted by police. 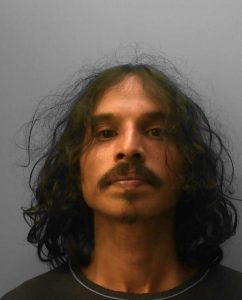 Shouidur Rahman, also known as Shohidur Rahman, was convicted in his absence at Brighton Magistrates’ Court of a series of offences, most of them committed in February.

The court issued a warrant, without bail, for the arrest of Rahman, 33, of Portland Road, Hove, and previously of Boundary Road, Hove.

He was due before the bench on Friday 27 November but failed to turn up.

Rahman was convicted of criminal damage by keying cars belonging to Kathleen Dent and James Pearce in Vale Road, Portslade, in February.

And he used racially or religiously threatening, abusive or insulting words or behaviour with intent to cause Christopher Stokes harassment, alarm or distress in Vale Road, Portslade, also in February.

Rahman was also convicted of using racially or religiously threatening, abusive or insulting words or behaviour with intent to cause Justine Tordoff harassment, alarm or distress in Worcester Villas, Hove.

He was found guilty of harassment for shouting abuse, kicking a fence and entering Worcester Villas, despite being banned.

The court was told that his actions breached a restraining order imposed at Brighton Magistrates’ Court in January.

Sussex Police said: “He is described as an Asian man of a slim build, with brown eyes and long dark hair.

“It is thought he remains in the local area.