Average council tax bills in Brighton and Hove to top £2,000

The average “band D” council tax bill in Brighton and Hove will top £2,000 in the coming financial year after councillors agreed their first £1 billion budget.

The higher bills will be sent out in the next few weeks after Brighton and Hove City Council set its 2021-22 budget tonight (Thursday 25 February) and the council tax for the year from April.

Councillors were told that the current financial year had been dominated by the coronavirus pandemic, with significant extra spending – most of it underwritten by the government.

Hundreds of rough sleepers were put up in temporary homes at short notice, businesses were given emergency grants and the council stepped in to help buy stocks of PPE (personal protective equipment).

The council’s coffers also suffered a loss of income as people struggled to pay council tax bills while parking revenues dropped and events were cancelled at council-owned venues such as the Brighton Centre.

Again, the government is funding most of the shortfalls and, despite forecasts of a big deficit, the council looks like balancing the books by the end of next month when the current financial year ends.

But the council has called on its reserves – or corporate savings – to carry out a “financial smoothing” operation to achieve this. And the effects are likely to be felt for the rest of the decade. Savings are being sought in the coming year although there is no political appetite for compulsory redundancies.

Councillors voted through a budget totalling £1.054 billion, including a £221 million capital programme – for big projects – and a revenue budget of just over £830 million.

A year ago, the council agreed to spend £947 million, consisting of £780 million in revenue spending and £167 million on capital projects.

The ruling Greens said that more than £27 million had been set aside for climate action plus new investments in equalities work, housing and homelessness and economic recovery.

But the Greens do not have an overall majority, with only 19 of the council’s 54 seats, and required cross-party support to vote the budget through.

They struck a deal with Labour and the Conservatives and incorporated spending requests in the form of a “composite” budget amendment.

The Greens said that the budget now included extra funds for domestic violence services following the outcry when RISE, the domestic abuse charity based in Brighton, recently lost a £5 million contract.

The party said: “This year’s budget is the first since the Green Party became the council’s largest party in July 2020.

“In July, the council was predicting more than £30 million overspend in services but is now projecting an underspend of just over £4 million.”

The Green council leader Phélim Mac Cafferty said: “Since taking control of the council in July 2020, in the midst of the health crisis, we have worked tirelessly to plan a better future out of the pandemic for our city.

“We are pleased that opposition parties have voted for the Green council’s budget for the city – which has put recovery from this crisis at its heart.”

The Conservatives said that they had come out on top as the parties negotiated a cross-party compromise during the budget council meeting. 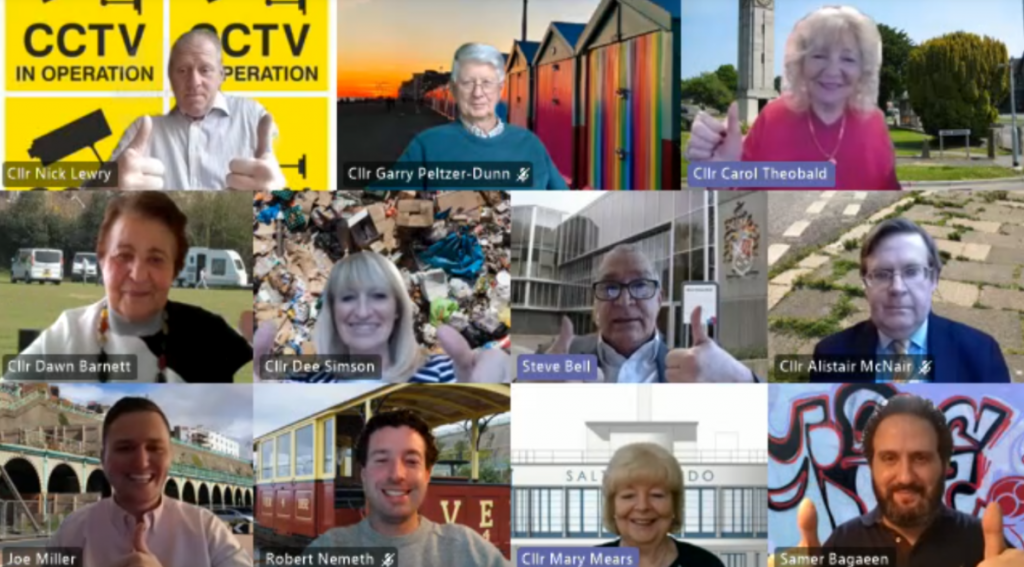 Councillor Joe Miller, who speaks for the party on finance, said that the result was testament to the hard work and positive ideas put forward by the Conservative group. He said: “Our Conservative team has been clear with what we wanted to achieve from this budget.”

There was a twin focus on restoring Brighton and Hove’s heritage and boosting tourism for a post-covid recovery as well as “improving the state of the city”.

Councillor Miller said: “Through our hard work, identifying savings, we have managed to secure £7 million of measures to benefit the city.

“This is a demonstration of our values and an example of what our Conservative team can accomplish for this city if elected at the next election.

“This is what we have delivered from opposition. Imagine what we could do in administration to rebuild our forgotten heritage, to turbocharge tourism and to bolster businesses – and to protect and support the most vulnerable and disadvantaged while investing in climate change at the same time.”

He said that the spending plans would “lead to a fairer and larger bounce back of growth, which our residents need and our city deserves after the most hellish year – due to covid – of many people’s lives”.

Labour said: “We’re delighted to have won support for our range of proposals to improve the Brighton and Hove City Council budget for the year ahead.

“By working constructively and cross-party in the best interests of the city, we were able to win support for measures to address residents’ concerns on issues such as drug dealing, parking charges, beach huts and bus services.

“Our budget plans came from listening to our communities, combating the climate crisis and tackling disadvantage.”