Dozens of people living in Brighton and Hove took the chance to quiz councillors or hear their response to questions about climate change during an online event.

The event was organised to build on the exchange of ideas that underpinned the Brighton and hove Climate Assembly which reported earlier this year.

Three councillors – one from each party and all with a keen interest in the subject – fielded questions for 90 minutes.

Ms Van Den Ouweland said: “The covid pandemic has shown us that the climate and ecological emergency isn’t a distant future possibility. It’s a reality and it’s happening to us now.”

One of those involved with organising the event, Les Gunbie, said: “We are really excited that Brighton and Hove City Council is publishing its Carbon Neutral 2030 Plan.

“What we know is that for this ambitious programme of change to work, we’ll all have to work together.

“So we want to hear about how our councillors from all parts of the political spectrum are going to work together on this – and what we as residents in the city can do to help.”

The organisers said that they were a group of people who lived and worked in Brighton, Hove and Portslade.

One of them, Tamsin Bishton, said: “We’re just people. And we’re all worried about the climate emergency and what’s happening to our natural world.

“We all have different political loyalties and views and levels of involvement in local activism.

“But we all really care about what the future holds and what life is going to be like if we don’t take action to halt the climate and ecological emergency.

“Like David Attenborough says, what happens next is up to us.” 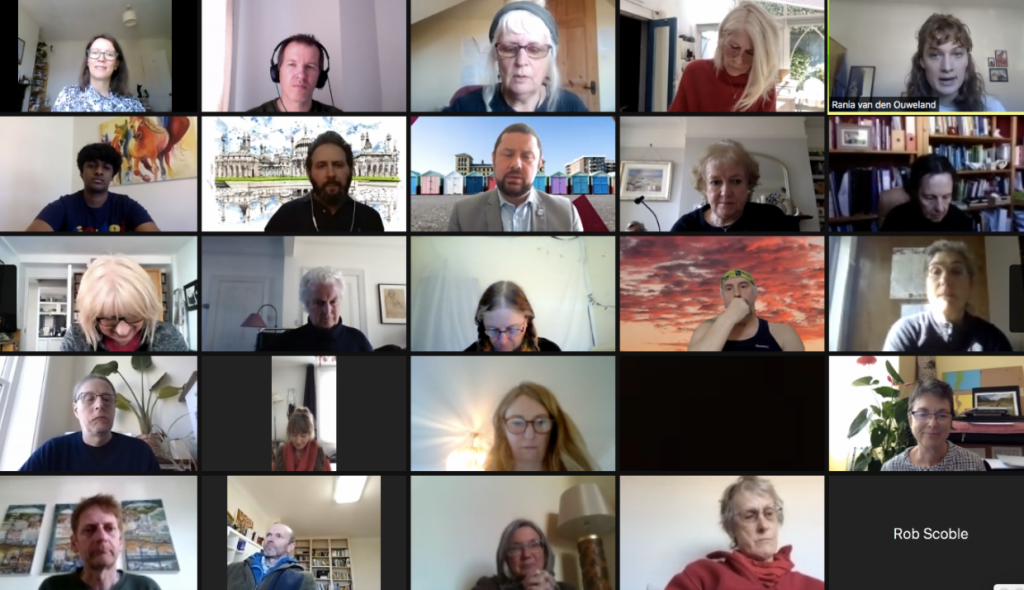 Councillor Bagaeen said: “Despite being one of the most important societal challenges of the 21st century, public engagement with climate change currently remains low.

“Because climate change is a global problem, with global consequences, people’s belief that individual actions can make a difference is often very low.

“This is why we start with ourselves, engage with friends, family, neighbours, colleagues, and with you, the residents of Brighton and Hove.

“I recognise that people are at different stages of this climate action spectrum. I therefore strongly believe that we need to begin each engagement from ‘where people are at’.

“This will, I believe, allow us to support the ‘converted’ to continue acting, while also encouraging those who show little interest to get involved.”

The event was held at lunchtime on Friday (19 March) and the take up appears to have encouraged the organisers to look at follow up sessions.

They hope the events will allow people to share information, track progress and hold the council and councillors to account.