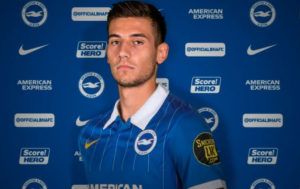 The 21-year-old became possibly the first ever “current” Albion player to score against England in a competitive international.

Moder, who made his full Premier League debut for the Seagulls in the 3-0 win against Newcastle, equalised for Poland after 58 minutes.

England had been ahead from a Harry Kane penalty.

They went on to win the match 2-1 thanks to a late goal from Harry Maguire.