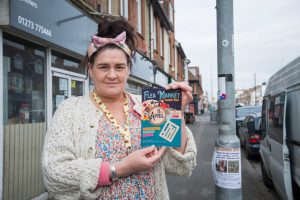 An overzealous council worker handed a mother and her six-year-old daughter a £150 fine after they taped a leaflet for a yard sale to a lamp post.

Jen Kennedy and, Zee, six were left in tears after the worker ambushed them in the street and accused them of fly-posting.

The pair had attached a small leaflet to a lamp post advertising a community yard sale marking the end of lockdown.

The homemade A5 note was taped next to one asking for information about a missing pet dog.

But an enforcement officer wearing a hi-vis jacket filmed the mother and her young daughter and then “crept up” behind them and handed them a notice for a £150 fine for fly-posting.

Miss Kennedy, 46, said: “I nearly jumped out of my skin. He crept up behind us brandishing a camera and told me we were guilty of fly-posting.

“I told him we were just advertising a resident jumble trail on our street and it wasn’t a business or for profit.

“There was already one for a missing dog on the lamp post and I promised to take it down after the event but he wouldn’t listen to me.”

Miss Kennedy, a psychotherapist from Hove, said: “I told him I’d take it down then and there but he said he had caught me red-handed on camera and would be issuing the fine.

“I broke down in tears because I don’t like to break the law – I’m the type person who picks up others people’s litter when I go out – so it was very upsetting.”

Miss Kennedy, who is a single parent and has found lockdown extremely tough on her mental health, said she that felt “traumatised” by the incident.

“It was extremely traumatic. I begged him not to issue a fine because I haven’t been able to work during lockdown and things have been very difficult financially over the last year.” 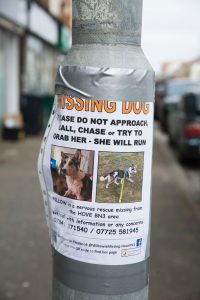 She called the council and explained the situation, telling them that she was vulnerable due to her mental health, but it still refused to waive the fine.

She said: “The council has shown a spectacular lack of common sense. Missing dog and cat posters on lamp posts go unpunished but hands out £150 fines for a flier for a community yard sale. It’s disgraceful.

“I understand that fines are there to stop fly-posting for bands and businesses but this is a clearly ridiculous application of the rules.”

Brighton and Hove City Council said: “Fly-posting is illegal and we get lots of complaints about the unsightliness it causes. It also costs the council – and therefore our local taxpayers – a lot of money to remove it.

“We have robust policies in places to enable us to take action against anyone who we catch fly-posting.

“Miss Kennedy has contacted our environmental enforcement team to appeal against her fine and for certain factors in her situation to be taken into account.

“Based on the information she has provided we can confirm that the fine has been cancelled.”