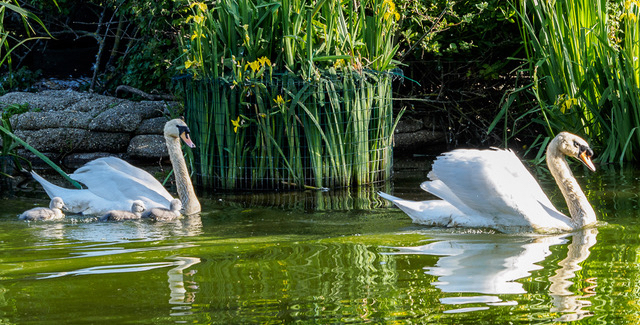 Fears that children destroyed swans’ eggs have been dismissed by the Friends of Queen’s Park.

Concerns that a nest was damaged by children throwing stones have led to calls for greater protection for the nest at the pond in the Brighton park.

But former councillor Geoffrey Bowden, who chairs the Friends of Queen’s Park, said that volunteers checked the eggs and found them undamaged.

Mr Bowden said: “We even had one of our colleagues don waders and take photographs of the nest immediately the rumours started circulating on Facebook around the time of 1 April.”

The wild unmarked mute swans are protected in law and “belong to the Crown”.

This means that taking or killing a swan, including destroying the eggs, could lead to a charge of criminal damage.

There were calls for better protection for the nest in Queen’s Park after members of the public raised their concerns in community Facebook groups.

Labour councillor Nick Childs, who represents Queen’s Park ward on Brighton and Hove City Council, said that five or six people had contacted him directly to share their concerns.

He also saw the Facebook posts and messages about the swans.

He said that he had spoken with the council’s Cityparks team and the park ranger asking for mesh to be put up to protect the nest.

Sussex Police also agreed to carry out more patrols in the area to protect the nest.

Councillor Childs said: “Fingers crossed, we hope they’ll be successful and we’ll have some cygnets.”