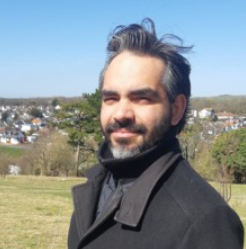 Five candidates are standing in a by-election in Patcham ward for a seat on Brighton and Hove City Council on Thursday 6 May.

Each candidate was sent questions which were submitted by community groups and voters. Below are the responses from Labour candidate Bruno De Oliveira.

Why do you want to be a councillor in Patcham ward?

My first ever volunteering opportunity was at All Saints Church in Patcham – working with young people from local schools.

When volunteering with St John Ambulance, in Hollingbury, one aspect that concerned me was the lack of funding and other support for community organisations such as the Old Boat Corner Community Centre.

I want to make a difference and be involved in shaping the future of Hollingbury and Patcham.

For too long, the ward has been seen as one of the poorer relatives of the city, and it needs the voice of a strong, local community-minded councillor who will get things done.

I’m a community psychologist who has contributed to the United Nations and the British Medical Journal.

I’ve successfully brought local communities’ wellbeing to the forefront of regional and national debate and I am a community mental health practitioner and Protect the NHS campaigner.

As a psychology lecturer, I understand how complex visible and non-visible disabilities can be.

I am a supporter of community-based interventions such as using art therapy and social prescribing.

I have come to understand that we need to improve the outcomes and support the wellbeing of our children, young and adults, by offering the right help at the right time from the right people.

To what extent do you support the trend of building more homes on busy roads, exposing more people to pollution? What will you do to improve air quality?

We need fresh and forward-looking ideas. We’re transitioning to more sustainable forms of transport which will make our roads less polluted.

Air pollution in the UK is a national scandal, affecting millions of people all across the country.

My aim is to work with others to help the city become carbon-neutral by 2030.

We need to provide sustainable travel options, with investment in walking, cycling and bus travel and measures linked to smart traffic signalling.

We need a pilot scheme in designated areas across the city to learn the lessons and understand how this can be scaled up to a larger scheme.

While it is hoped that confidence using the public transport network will return, the covid-19 pandemic has presented issues around the uptake of public transport and concerns that an increased number of people will make journeys by private vehicle instead.

We can implement sustainable mobility to tackle increasing congestion and pollution.

We need to attract people to use the public transport service by creating optimised and user-friendly infrastructure, including sheltered bus stops, a better maintenance regime with a hotline for reporting faults and damage, more bike parking, real-time information and more bus prioritisation.

We need to create playground committees to have a voice and take ownership of it.

Mackie Park playground, for example, I will work with the council to get swift action on delivering the proposed renovation.

The council recently voted in favour of plans to spend £3 million on refurbishing the city’s playgrounds over the next four years.

I also support a refurbishment programme being informed by consultation with disability groups in order to improve disability access to local playgrounds.

As someone who has co-ordinated youth work projects, I know its importance for young people’s development. The more a child is invested in school through extracurricular activities, the better they will do.

We need to work with parents and local organisations to create spaces where young people can socialise and learn soft skills.

This comes against the backdrop of youth services having borne the brunt of 10 years of Conservative government cuts. Across the country, you see the same picture – decimated youth services.

We must also give young people themselves a stronger voice in the future of youth services and ensure that sexual health services and mental health support are delivered at youth centres across the city.

I will strive to fight for better-funded youth services across all of our city.

We need to remind people that preventing dog fouling often saves money for the council.

It’s cheaper to stop the problem over the long term than to keep clearing it up.

We need to engage the public. Then we can build on more dog bins, noticeboards and lamp posts.

When problems with a service are detected, I believe that monitoring the issue is useful and not just a tick-box exercise.

Provide personalised responses when handling complaints – rather than automatic responses.

Fly-tipping is a major concern affecting all parts of our city.

It has been on the increase in recent years, long before the pandemic.

A report before the council showed a 120 per cent increase in fly-tipping during the lockdown.

There is a lack of understanding about the impacts of fly-tipping, and many people perceive the behaviour as low impact and low cost.

There are not many streets in our city that you can walk down without regularly coming across the kerbside tipping of furniture, mattresses, etc.

Fly-tipping costs the council, and therefore residents, more than £100,000 a year.

We, therefore, need to improve our enforcement against fly-tipping and, in particular, kerbside tipping.

My work over the last 15 years has made me an active part of my community. I’m not someone doing this just now.

I will remain listening to the community, raising issues, researching how to tackle these issues with the community’s participation.

I am standing as a councillor in a neighbourhood I have lived and worked in.

I love meeting all sorts of interesting people and I will be regularly out and about in the ward – from holding surgeries where residents can raise their issues to visiting local community groups and resident associations.