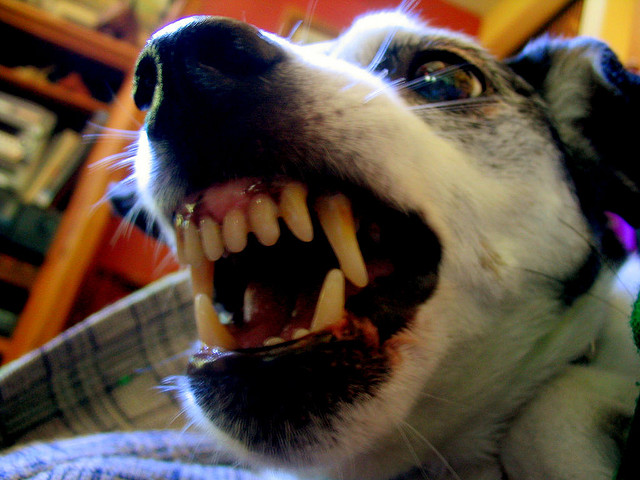 Stock image of an aggressive dog by Jan Tik on Flickr

More action will be taken against dangerous dogs after a watchdog ruled that the city council has been too lenient in the past.

A resident complained to the local government ombudsman that no action had been taken against the owner of a dog which had attacked his dog several times.

He wanted Brighton and Hove City Council to issue a Community Protection Notice (CPN), but it told him there wasn’t enough chance of a positive result in court.

He also discovered that the council had not issued any CPNs despite receiving 450 complaints about dogs in five years.

The ombudsman investigated, and found the council had been applying too high a threshold for taking action.

The ombudsman said: “The council appears to have put in place a higher threshold than set out within the practitioner’s manual.

“This means the council has not applied the correct test when it considered whether to issue a CPN in response to Mr X’s reports about Dog A.

“The test is whether there are reasonable grounds the behaviour reported is having a detrimental effect on the quality of life of those in the locality, be persistent or continuing in nature, and is unreasonable.”

They added: “I also considered the fault identified is likely to have caused an injustice to the wider public.

“This is because the evidence suggests, as the Council has never issued a CPN in five years, the council has likely consistently applied the wrong test when dealing with reports/incidents involving dogs.”

The resident, described as Mr X in the ombudsman’s report, first reported the dangerous dog (Dog A) to the council in March 2019, when it twice bit his dog.

The animal warden team investigated, but decided there was not enough evidence, and instead brokered an agreement between both owners not to walk their dogs at the same time.

In June, Dog A again tried to bite Mr X’s dog, and in October, Mr X reported two more attacks, and supplied CCTV footage of Dog A running uncontrolled from the park towards him and his dog.

Finally, in April last year, another attack by Dog A was reported, and Mr X provided a photograph of the injury.

But the council still took no action.

In their report, the ombudsman accepted it was no longer possible to issue a CPN on Dog A’s owner because the issue was no longer live.

It told the council to apologise and pay Mr X £100, and to review its policies and procedures.

A council spokesperson said: “With regards to the dog incident reported by Mr X, we have accepted and implemented the ombudsman recommendations in full.

“We did not issue a community protection notice (CPN) relating to this incident for the reasons given in the ombudsman’s report. These reasons were accepted by the ombudsman.

“Since the ombudsman report in December we have received 12 cases. Of these, there is one case where are considering applying the CPN procedure.

“There are a number of reasons why the procedure hasn’t been appropriate in the other cases.

“We put new procedures in place in January following the Ombudsman’s report to make sure we actively apply the CPN threshold test in all cases.

“Where we have sufficient information we will actively use the CPN procedure to tackle the irresponsible behaviour of a small minority of dog owners.”