Council holds first town hall meeting in over a year

The leader of the council said that he was attending a meeting in person under protest as councillors met face-to-face for the first time in more than a year.

Green councillor Phélim Mac Cafferty spoke out as the three party leaders on Brighton and Hove City Council met in the council chamber at Hove Town Hall for a meeting of the Policy and Resources Committee.

Three senior officials joined them in the chamber but other officials and a co-opted member Anusree Biswas Sasidharan took part online on Thursday (13 May).

The committee’s other seven elected members were not allowed to take part virtually after temporary coronavirus measures lapsed.

Once again, councillors are required to be present at meetings to cast their vote but the council has limited numbers to ensure covid-safe conditions.

A number of councils and other organisations have been pushing for a more flexible approach even though the temporary rules have expired.

But even a court challenge failed to win the day.

Councillor Mac Cafferty said: “We are meeting in person, not because this is our choice but because of the failure of government to legislate for the continuation of virtual meetings and remote decision makings, despite the ongoing pandemic and despite the obvious advantages online meetings could afford us in terms of access to local decision-making.

“While I am, of course, glad to see so many of you in person, I consider this an unfortunate step and am here under protest given we remain convinced of the need to minimise covid risk.

“Just weeks ago, this meeting could have been held virtually. The only difference being the government failed to extend the legislation to allow this to continue.

“So in a matter of weeks, the capacity for all councillors to make decisions in a virtual meeting has gone from lawful, sadly, to unlawful.”

Councillor Mac Cafferty said that the current arrangements were intended to minimise covid-19 risks and were to the highest public health standards to protect the public, staff and councillors.

More than half of the members of Brighton and Hove City council are under 60, with four councillors still in their twenties.

Most younger councillors do not yet qualify for vaccination and many others have had ony their first jab.

Conservative leader councillor Steve Bell asked whether the council’s new rules, reducing the numbers taking part in meetings, would be fairly applied throughout the next cycle of meetings.

The council’s executive lead officer for strategy, governance and law, Abraham Ghebre-Ghiorghis, said that the arrangements would stay in place through to July.

Dr Biswas Sasidharan said that she felt that the pandemic had lent itself to increase engagement online and asked for figures on webcast viewers and participation.

Councillor Mac Cafferty said that he welcomed increased public engagement as the council had a long-standing reputation for public participation in meetings whether or not those taking part agreed with the council. 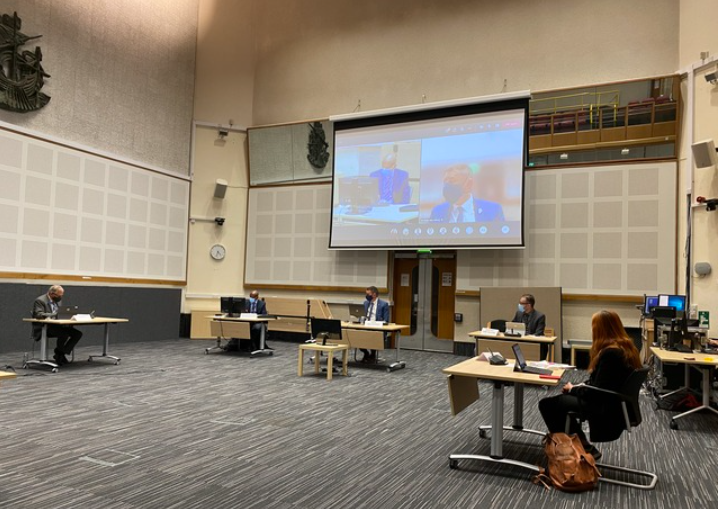 Mr Ghebre-Ghiorghis said that the numbers participating in virtual committees was not available yet.

But he said that they had allowed for flexibility and greater inclusivity for councillors and officials as they juggled work and childcare.

He said: “It was also beneficial for the environment as there was a loss of travel time.

“Also from members of the public, the ability to ask questions and offer deputations from the comfort of their own home was beneficial.” 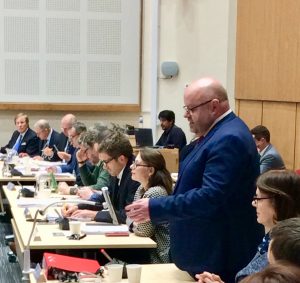 A more conventional meeting in the chamber of Hove Town Hall

He said that, anecdotally, more people appeared to have followed meetings and engaged with the council.

People with mobility issues also benefited from virtual meetings, Mr Ghebre-Ghiorghis said, and he hoped that hybrid meetings could continue for the public, even though councillors would have to be present.

Labour councillor Carmen Appich, who is due to become the joint opposition leader next week, praised virtual meetings and said that the reduced numbers represented a good compromise to allow debate between the political groups.

She said: “There has been more public involvement, certainly from the committees I’ve been on. There seem to be more public questions and follow-ups.

“Yes, of course, the IT goes down, and you have to work around. By and large, it’s been a really positive experience.”

The committee agreed that for the next nine weeks the minimum number of councillors – a quorum – would attend meetings in person to ensure compliance with social distancing rules.

Until September, any reports intended for committees to note – rather than those requiring a decision – would not be on the agenda to cut the amount of time that councillors spent in the chamber.

Any decisions that the council could delay would be held back and decisions that officers could make, after consulting leading councillors, would not go to committees.

Up to six members of the public can attend a meeting by booking a place in advance.

All meetings other than the full council and a couple of committees would be attended by just three councillors.

Fourteen councillors instead of all 54 would attend the meetings of the full council – five Greens, five Labour, three Conservatives and one independent.

Four councillors would attend the Licensing Committee – one from each political group and one independent – and the Planning Committee would include all ten members.