A £9 million scheme to provide supported housing for people with physical disabilities and brain injuries has moved a step closer.

Knoll House, a two-storey former respite and rehabilitation centre in Ingram Crescent, Hove, would be demolished to make way for a three-storey supported housing building if approved.

The proposal won the backing of a Brighton and Hove City Council sub-committee yesterday (Tuesday 8 June).

Next, it will go before the council’s Policy and Resources Committee at a meeting next month.

The council had intended to convert Knoll House into 18 self-contained “supported living” flats but a feasibility study found that it would be just as cost-effective to knock it down and put up a purpose-built block.

The study found that the building would need costly and significant electrical, mechanical and structural work if it were to be refurbished and converted.

It would still not be fully wheelchair accessible though and only one flat would be able to take a bariatric resident – someone weighing up to 55 stone.

Officials said that the building was almost 30 years old and was last refurbished 18 years ago.

A report to the first meeting of the council’s Adult Social Care and Public Health Sub-Committee said that a conversion would be “less disruptive to the local community”.

But a rebuild would mean that the council could have 27 wheelchair-accessible flats, with two of them suitable for bariatric residents.

The report said that, by 2030, the council expected an extra 580 people with serious disabilities to need supported housing.

When Knoll House closed three years ago, it was running at 50 per cent capacity – and all rehabilitation now took place at Craven Vale, the sub-committee was told. 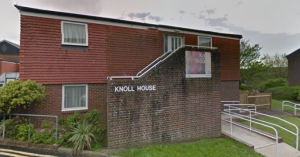 Labour councillor Theresa Fowler asked for a site visit and public consultation, saying that the rebuild would use some of the land around the building

She said: “I am wondering if the residents there will be consulted about whether they use this land for their own use.

“I understand the building is surrounded by homes. There are lots of people living around there. I want to make sure people will be properly consulted.”

The council’s executive director for health and adult social care Rob Persey said that the space around the building could be used by people in the new centre and their neighbours. He also said that neighbours were being consulted.

She said that the Brooke Mead independent living facility for people with dementia, in Albion Street, Brighton, had an £8 million budget but ended up costing £12 million.

She said: “For those of us who remember Brooke Mead, it was all guns blazing – this wonderful development for £8 million.

“When it went over £12 million, it started to get serious – and it went way over budget. It was really concerning.

“There needs to be really tight financial control on anything like this.”

Councillor Mears said that many schemes went over budget which concerned her when money was tight.

She wanted the decision deferred until all councillors could visit the site but Mr Persey said that lessons had been learnt from the Brooke Mead project.

“As a scheme now, I would stress it is a very well run and operated scheme which has high value to the city.”

Mr Persey said that there was a demand for this type of housing and it was expected to increase.

Councillors agreed to organise a site visit with members of the Policy and Resources Committee which is due to decide whether to approve the scheme at a meeting on Thursday 1 July.