A homeless man with a history of shoplifting in Brighton has been jailed over a bomb hoax. 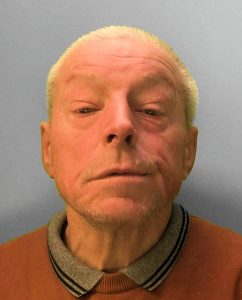 Peter Osbourne, 60, made the hoax call 10 days ago, the morning after the Manchester Arena bomb report was published.

The next day Osbourne admitted the offence at Brighton Magistrates’ Court and was jailed for six months.

Sussex Police said today (Monday 28 June): “A man has been jailed after making a bomb hoax at a police station.

“The 999 call was received at 7.32am on Friday 18 June – the morning after the Manchester Arena bombing inquest published its first report.

“The call was traced back to a public phone box in Shoreham High Street, and officers were deployed to the scene.

“Meanwhile, all staff and officers at Shoreham Police Station were alerted to the incident and advised not to open any mail.

“The two-minute phone call led to the deployment of officers from divisional response and operations departments to protect the public, with CCTV operators and officers from the Force Intelligence Unit involved in both tracing the suspect and establishing the feasibility of the threat, and both South East Coast Ambulance Service and West Sussex Fire and Rescue Service put on standby.

“The suspect was located and arrested within 30 minutes of making the call, and emergency services were stood down 15 minutes later after the divisional response inspector and critical incident manager confirmed the threat was a hoax.

“Peter Osbourne, 60, unemployed, and of no fixed address, was arrested and charged with making a bomb hoax and was remanded in custody.

“He pleaded guilty to the offence at Brighton Magistrates’ Court the following day (Saturday 19 June), where he was sentenced to six months’ imprisonment and ordered to pay a £128 victim surcharge.”

Detective Constable Noel Simmonds said: “This bomb hoax was made the morning after Sir John Saunders published his first report on the Manchester Arena bombing, a sad reminder of why emergency services have to take such threats seriously.

“While this incident turned out to be a hoax, it was only the swift and thorough investigation that prevented serious disruption to the community.

“I would like to thank all of the emergency services involved in this incident, and Brighton and Hove magistrates for demonstrating that the courts will deal robustly with this kind of behaviour.”