Brighton and Hove Albion have completed the signing of goalkeeper Kjell Scherpen from the Dutch champions Ajax Amsterdam on undisclosed terms. 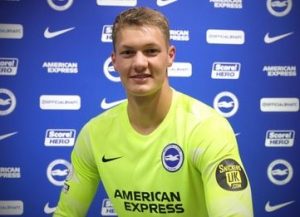 The transfer fee was reported to be more than £4.2 million – or about €5 million.

The 21-year-old, who is 6ft 8in tall, began his career in the Netherlands with second-tier club FC Emmen where he made over 30 senior appearances before joining Ajax in July 2019.

By then he had already made his first start for the Dutch under-21s, having also represented them at under-19 level, making his debut against an England team featuring Jadon Sancho and Phil Foden in September 2018.

He made four first-team appearances last season for Ajax including one in the Europa League.

Albion head coach Graham Potter said: “We’re delighted to welcome Kjell to the club. He’s a player we have been monitoring for a while and we see him as a player with a lot of the right attributes.

“As well as his size, he is someone we think will work very hard to improve all aspects of his game as he gets used to English football.

“We wish him all the best and look forward to working with him.”

Albion now have four keepers vying for one first team position including last season’s first choice Robert Sanchez as well as Jason Steele and Christian Walton who made his debut way back in 2014 but has played only three times since.