Racist abuser wanted by police after outburst on Brighton bus

A man suspected of an outpouring of racist abuse on a bus in Brighton is wanted by Sussex Police. 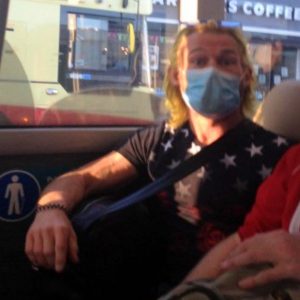 The force issued a picture of the suspect today (Monday 26 July) and asked for the public’s help in finding him.

Sussex Police said: “Police have released this image of a man sought in connection with a racially aggravated public order offence.

“The incident occurred on the number 1 Brighton and Hove Buses bus heading west along Western Road, Brighton, at around 7.20pm on Monday 31 May.

“The suspect is alleged to have used a number of racially aggravated expletives towards the victim, who had been speaking with the bus driver about a separate matter.

“He is described as white, about 40-years-old and 5ft 10in, of stocky build, with dyed yellow long hair tied back – and wearing a short-sleeved tight black shirt, with white stars all over, and black shorts.

“The suspect was with another man and they had a small dog.

“They were sat on the lower deck near the front of the bus when the incident occurred.