Residents are concerned about a proposed extra floor on a block of flats in Hove where there are already cracks in the wall. 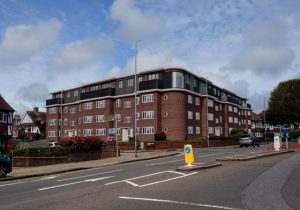 How Nevill Court in Hove could look

The plans for a roof extension, to include four one-bedroom and three two-bedroom flats, are due to go before councillors next week.

Brighton and Hove City Council Planning Committee will give its verdict on the scheme at Nevill Court, in Nevill Road, Hove, on Wednesday (4 August).

Officials support the proposal which would include balconies, cycle parking and 12 photovoltaic solar panels on the roof.

The owner, SAA Investments, said that the scheme is intended to make “optimal” use of the site.

It said: “The extra flats are entirely consistent and complementary to the prevailing character and appearance of the area and will maximise the potential of this corner site.

“The application scheme is a ‘windfall’ site which will make best use of an underutilised site and provide much-needed homes while still protecting the character and setting of the local area.”

Residents and neighbours sent in five objections, with one pointing out that the planning statement described the area as a mix of family-sized homes and modern flats when there are no modern flats near by.

Those objecting mentioned cracks in the existing building and problems with wall ties in the block that dates from the 1930s.

One resident, whose details were redacted by the council, said: “The centre section in Nevill Avenue required a substantial rebuild a few years ago.

“The crack running through seven or eight courses of brickwork at the western end has been apparent for years without repair and creates the impression overall maintenance may be lacking.”

Another neighbour, whose details were also redacted, wrote: “Brickwork and the roof have been subject to repeated repairs.

“The plans submitted present no obvious consideration of the structural integrity of the existing building and its suitability to bear the additional compressive load from a rooftop development of the proposed scale.”

Other concerns included loss of sunlight, damp issues and the prospect of the building dominating the street.

If councillors grant planning permission, the owner would be expected to pay £135,750 towards affordable housing elsewhere in Brighton and Hove.

The Planning Committee is due to meet at Hove Town Hall at 2pm next Wednesday (4 August). It is scheduled to be webcast on the council’s website.