A business owner said that changing his restaurant into a bar was a “mistake” because of problems since then with drugs and anti-social behaviour.

Said Pascal Madjoudj, 51, known as Pascal, told a licensing panel that he wanted to turn his business, Pascal’s Bistro Bar, in Queen’s Place, Second Avenue, Hove, back into a high-class restaurant.

These included significant levels of cocaine being found on several surfaces in the toilets on three occasions over eight months and a violent attack that started in the venue.

Mr Madoudj told the panel – councillors Lizzie Deane, Jackie O’Quinn and Dee Simson – that he changed his business model from a restaurant to a bar in late 2019 because he was struggling to recruit chefs as a result of Brexit.

He was a chef by trade and was overwhelmed by the challenges of running his venue as a bar, mainly because he lost his management team at the start of the coronavirus pandemic when one went home to France and the other died.

Councillor Simson asked Mr Madjoudj if he was fully aware of what was going on at his premises?

He was the premises licence holder and designated premises supervisor, meaning that he had day-to-day responsibility for alcohol sales at the bistro.

He said: “I was aware of the problems occurring and I tried my best to try to resolve every problem but still I couldn’t.

“The biggest problem was the concept. It wasn’t a restaurant. It was a bar – and I couldn’t stop people from coming in and I had different kinds of customers. Not the kind of customers I’m used to.”

He plans to turn his business back into a restaurant after Sussex Police applied for a review of the premises licence last month.

Councillor O’Quinn said that, historically, management had been an issue. When the venue was called La Fourchette, she said, and under Mr Madjoudj’s ownership, he had been fined £10,000 for breaching food hygiene regulations in 2014.

Sussex Police barrister Edward Elton said that the “rot had set in” at the bar, with routine police checks finding very high readings of cocaine in the toilets in September and December last year and most recently in May.

Despite warnings from the police and their request for a drugs policy and action plan, Mr Madjoudj did not respond until the force asked for a review of the licence. It placed his business at risk of closure if the alcohol licence were to be withdrawn. 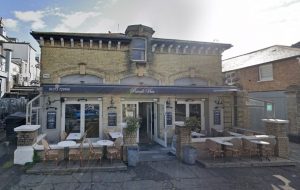 Mr Elton said: “When it comes to action, you have a man who treats these review proceedings as a spur to action to do the things that obviously needed to be done almost a year ago onwards.

“These review proceedings are not a warning. The repeated warnings he received each time a problem was identified, those were the warnings.”

Mr Elton said that Mr Madjoudj provided the panel with “all the pretty words” but had already broken the minimal conditions on his alcohol sales licence.

Councillor Mac Cafferty, who represents Brunswick and Adelaide ward, shared his concern about the “toxic” combination of cocaine and alcohol as he urged the panel to revoke the licence.

He said that there were 67 licenced businesses in the area, a number that contributed to anti-social behaviour in the area.

The saturation of licensed premises and the resulting problems had prompted the council to extend its “special stress area”, where licensing rules were tougher, into central Hove.

Councillor Mac Cafferty said: “What has become very clear over the period that Sussex Police have carried out their inspections is that there is inadequate and dangerous management of this premises, notwithstanding the issue of drugs.

“We have seen a complete failure, sadly, of responsible management of the premises. Sussex Police asked for a drug policy and action plan to be in place by 31 December last year. My understanding is, to date, this has not been received by police.”

Mr Madjoudj’s solicitor Lucinda Dore said that it was unfortunate that it had come to a hearing but none of the issues set out in the review were currently present at the restaurant – and that her client had addressed all the concerns.

She said that the review had achieved what police and licensing officials wanted which was for Mr Madjoudj to turn his business around.

Ms Dore said: “The application focuses on the drugs misuse issue and that has been completely eradicated.

“Mr Madjoudj has listened carefully to all parties concerned and has taken on board all comments made by police and licensing officers and is keen to work closely with all parties going forward.

“He has made mistakes, but he is keen to rectify them.”

Licensing official Jo Osborne said that the panel had the option of putting tighter restrictions on the licence which had few conditions attached to it since it was issued in 2007. That was when Mr Madjoudj took over the premises after it was converted from a garage into a restaurant.

There were currently no restaurant restrictions limiting alcohol sales to people seated at tables and eating a substantial meal or banning people from standing and drinking at the bar.

The panel could also opt to suspend the licence for three months or revoke it completely, the councillors were told.

They retired to make their decision which should be made public within five working days.

Earlier this week, Aftab Miah was jailed for punching another customer after they left Pascal’s in May, resulting in life-changing injuries for the victim.